Manchester City reached the Champions League final for the first time in their history after Riyad Mahrez’s double secured a 2-0 victory (4-1 on aggregate) over 10-man Paris Saint-Germain on a historic night at the Etihad Stadium.

Pep Guardiola, who reaches the Champions League final for the first time since he won the competition with Barcelona in 2011, will now lead his side against either Chelsea or Real Madrid in the final in Istanbul on Saturday, May 29.

But before that, they have domestic matters to attend to and could add the Premier League title to the Carabao Cup they won last month with victory against Chelsea at the Etihad Stadium on Saturday, live on Sky Sports (kick off 5.30pm), as they bid to complete a treble.

Trailing 2-1 from the first leg at the Parc des Princes last week, PSG, who could only name Kylian Mbappe on the substitute’s bench, thought they had a chance to cut the deficit early on after referee Bjorn Kuipers pointed to the spot for a handball against Oleksandr Zinchenko. However, Kuipers overturned his original decision after replays showed the ball clearly hit the full-back’s shoulder.

City took full advantage of the reprieve as Mahrez (11) found the back of the net from a tight angle to put them in an extremely dominant position at the break.

PSG committed plenty of bodies forward as they looked for a way back in the tie, but there was no way through City’s rock-solid defence and the French side were eventually caught on the counter-attack as Mahrez (63) finished another fine City move to put the game beyond any doubt.

City’s second goal sparked plenty of PSG frustration and they finished the game with 10 men after Angel Di Maria’s kick out at Fernandinho in the 69th minute, ending any chance of a miraculous comeback as City eased to a historic victory.

When is the Champions League final? 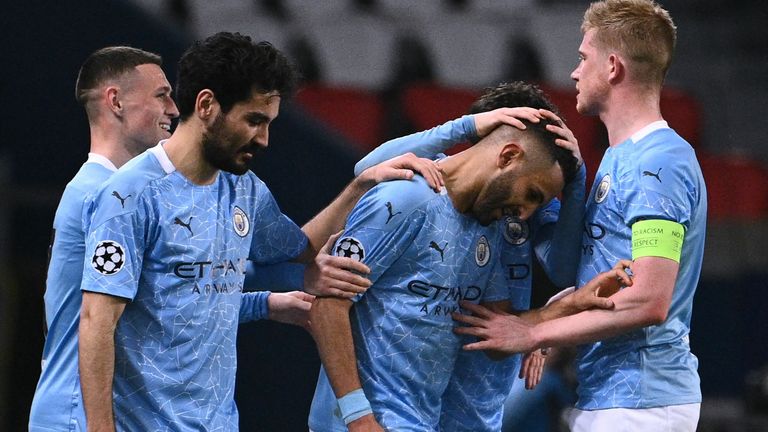 This year’s final will take place in Istanbul on Saturday, May 29.

The Ataturk Olympic Stadium famously staged the 2005 Champions League showdown, when Liverpool came from 3-0 down at half-time to beat AC Milan on penalties.

UEFA has not yet confirmed the kick-off time.

Man City had a big early scare when referee Kuipers awarded PSG a penalty, pointing to the spot for handball against Zinchenko.

However, with replays quickly showing the ball had clipped the Ukrainian full-back’s shoulder, the referee was forced to change his decision after going over to consult the pitchside monitor.

After a frantic opening, City then took full control of the tie as they broke forward in numbers to take the lead in the 11th minute.

Ederson started the move, his inch-perfect long pass over the top released Zinchenko down the left and he cut the ball back for Kevin De Bruyne on the edge of the penalty area. The Belgium international’s shot was initially blocked but the rebound fell to Mahrez, who beat Keylor Navas from an extremely tight angle to give City the lead.

PSG, knowing they needed two unopposed goal to at the very least force extra time, threw men forward as they pushed to get back into the game and they went close on two occasions as Marquinhos’ looped header clipped the crossbar and Di Maria shot wide of an open goal after Bernardo Silva was dispossessed following Ederson’s poor roll out.

PSG continued to play on the front foot but there was no way through City’s stubborn defence and the hosts had plenty of space to run in on the counter attack. Mahrez worked another shooting opportunity but this time Navas made a smart block at his near post to keep his side’s deficit to one at the interval.

PSG continued to ask plenty of questions of City after the break but Guardiola’s men found the answers, defending superbly throughout.

Man of the match: Ruben Dias.

Neymar, who was well shackled for most of the evening, found some space and burst into the area, but Zinchenko never gave up the chase, producing a fine last-ditch block to deny the Brazilian.

The intervention was celebrated like a goal by City’s defenders, but they never lost focus as Ruben Dias threw his body in the way of yet another strike, blocking Ander Herrera’s goalbound volley.

Despite their defensive heroics, there was space of City to exploit and they did just that in the 63rd minute,

They caught PSG on the counter-attack as Phil Foden exchanged passes with De Bruyne before sending a low ball into the area for Mahrez to convert at the far post, making it 2-0 on the night and 4-1 on aggregate. It was a fatal blow for the French side and their frustrations boiled over.

Di Maria became the second PSG player to be sent off in the tie for a kick out on Fernandinho as he went to retrieve the ball for a throw-in.

More rash challenges came for Mauricio Pochettino’s side, who picked up a flurry of late yellow cards and were lucky not to have a second player sent off on the night, but it did not dampen Man City’s evening.

They could have scored more as the impressive Foden hit the post and saw another late strike saved by Navas as City closed out a famous victory.

11 – Manchester City are the first English side to win 11 games in a single European Cup/Champions League campaign. Dominance. https://t.co/pdJHlXxPyc

We could have picked any player in light blue!

It was a heroic effort from Manchester City and there were brilliant performances from Guardiola’s attacking players, including the two-goal hero Mahrez and the brilliant Foden.

However, it was their defensive resilience which stood out even more! Kyle Walker, John Stones and Zinchenko all played their part, but Dias was the standout.

A rock at the back. 🪨 pic.twitter.com/0SRECJYW9N

He threw himself in front of everything that came his way, putting his body on the line to make block after block to repel PSG.

It’s what we’ve become used to from him all season, yet another superb performance, and the individual accolades surely cannot be too far away for the Portugal international.

PSG failed to land a single shot on target against Manchester City – the first time the French side have failed to do so in a UEFA Champions League game since 2003-04 (when we have this data available).

Manchester City are the ninth different English team to reach the European Cup/Champions League final; three more than any other nation (Germany and Italy – 6 sides).

Paris Saint-Germain’s Mauricio Pochettino has lost more games against Pep Guardiola than he has versus any other manager in his managerial career (12). Pep Guardiola’s total of 12 wins versus Pochettino is his joint-most against a single manager in his career as a top-flight manager (level with Manuel Pellegrini & Sean Dyche). 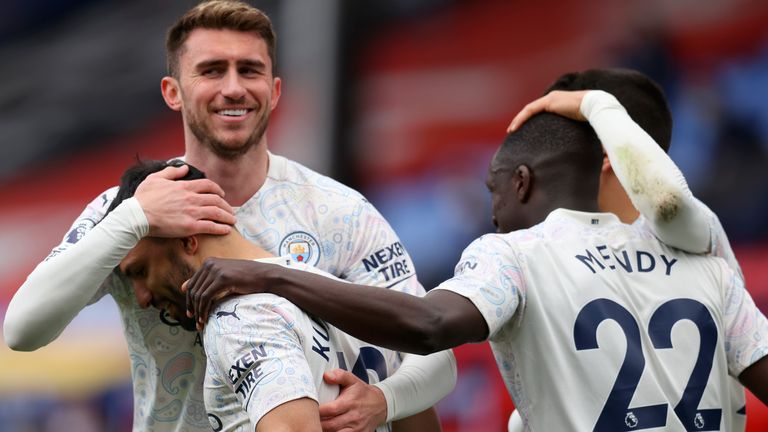 It’s back to domestic matters for Manchester City and they could win the Premier League title this weekend. Man City’s champagne was put on ice last weekend after Man Utd vs Liverpool was postponed – but they may only have to wait a few days to get their hands back on the title.

A new date for Manchester United vs Liverpool is yet to be confirmed but assuming the game is not rearranged for this midweek given United’s Europa League commitments, City could secure the title on Saturday May 8 when they play Chelsea, live on Sky Sports.

And what next for PSG? 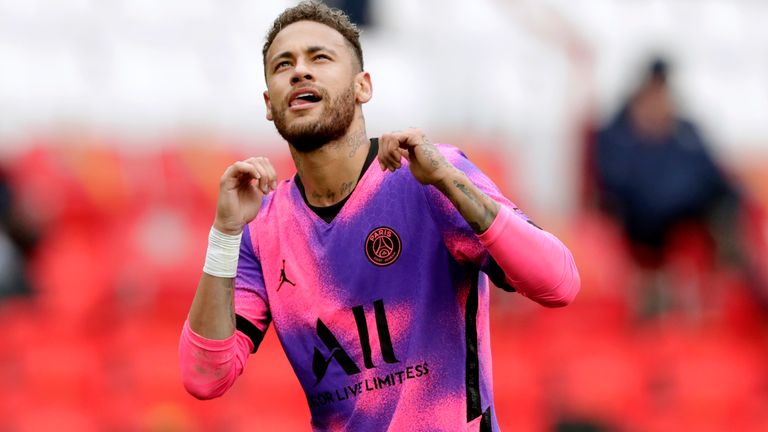 Paris Saint-Germain are locked in a fierce battle for the Ligue 1 title. They are currently second, one point behind Lille and face a trip to Rennes on Sunday evening; kick off 8pm.