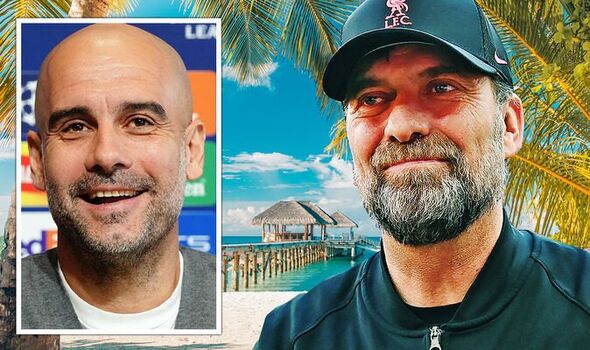 Manchester City boss Pep Guardiola has told Jurgen Klopp he is wasting his time moaning about fixture scheduling insisting if you don’t want this sort of pressure clear off to the Maldives. Klopp and Liverpool were furious after broadcasters put their trip to Newcastle in the Saturday lunchtime slot less than 72 hours after a Champions League semi-final against Villarreal on Wednesday night.

The Liverpool boss accused BT Sport of trying to sabotage their historic hunt for the quadruple. But Guardiola insisted the German’s anger will achieve precisely nothing and told him if he wants an easier life he could go and sit amongst the palm trees on the Indian Ocean retreat.

“How many times have we discussed it? Nothing is going to change,” said Guardiola. “The broadcasters think about what they have to do. They think about the money not the players so I’m not going to solve it.

“It’s not going to change, because the broadcasters are thinking about what they have to do to get more viewers so if I’m not satisfied, I go home and don’t be manager of Manchester City. I go to another league in the Maldives, the Maldives league, and play one game a week and I’m so comfortable under the coconuts. It would be so perfect but it’s not the case.

“You’re playing at 12.30? I’m sorry Liverpool. Of course I understand it, but what can I say? We’re not going to solve the problem. Sir Alex Ferguson was the most important icon in the history of English football and he was complaining about it when he was a teenager.

Liverpool’s early start will at least given them the chance to put pressure City ahead of their clash with Leeds in the 5.30pm teatime kick off. But with the Real Madrid Champions League semi final second leg to come on Wednesday, Guardiola insisted his players were relishing the pressure.

“We have been here many times so absolutely not, with these players I know them,” he said when asked whether his players can handle it. It will be tough at Leeds with the crowd, they are fighting for their points, we need points and we feel it.

“But we are incredibly focussed, everyone in the club knows what we are playing for in this last part of the season and knows what we have to do.”

Premier League: What’s at stake at top and bottom this week?