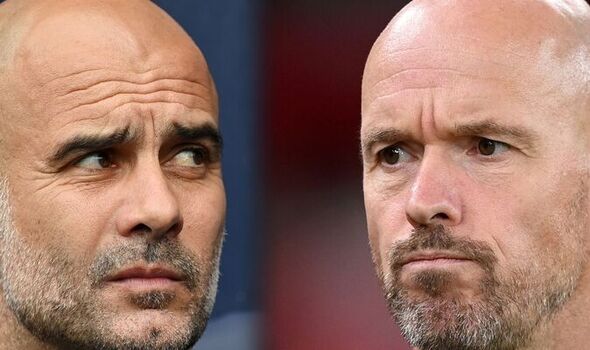 Pep Guardiola has declared he is worried about Manchester United – as he feels City’s noisy neighbours are finally coming up the hill. Despite stuffing Erik ten Hag’s side 6-3 at the start of the month in a largely one-sided derby mauling, the Spaniard is now concerned after witnessing drastic improvements in United.

The Red Devils have turned in some real statement performances since the pasting and were unlucky not to win away at Chelsea last Saturday.

“I saw on Thursday [against Sheriff Tiraspol] and Chelsea in the first half.

“I thought ‘I like it’ what I see from United just now. I have a feeling United are coming back. That is why you have to fight for the title.”

City, who are the reigning Premier League champions, are currently two points adrift of leaders Arsenal ahead of the trip to Leicester.

Yet with Erling Haaland flying it only looks a matter of time before City reclaim top spot ahead of the Gunners.

United remain in top-four contention but recent draws with Newcastle and Chelsea have held them back in their pursuit of an unlikely title charge.

Ten Hag’s side are undefeated since the heavy defeat at the Etihad Stadium and they could move into fourth place should they win their game in hand.

City could be without Haaland this weekend following a brief fitness scare.

The Norwegian was spotted hobbling with a foot issue, while he was also suffering from a fever earlier in the week.

“He feels better, but we train this afternoon, and we will assess in these few hours,” Guardiola, ahead of his second trip to the King Power Stadium this season.

“We will see how he feels. After we will decide – I will know in two hours if he can play.”

City have recovered well from their minor setback at Anfield, when they lost 1-0 to Liverpool in a closely-contested encounter.

They have since comfortably dispatched Brighton before sowing up top spot in their Champions League group with a 0-0 draw at Borussia Dortmund.

Title rivals Arsenal host Nottingham Forest on Sunday, meaning City will go top with a win at Leicester in the early kick-off on Saturday.