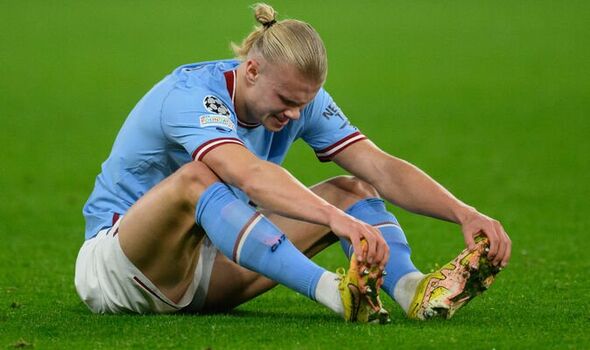 Erling Haaland has been left out of Manchester City’s starting lineup to face Leicester City after suffering an injury in midweek, according to reports. The Norwegian superstar looks set to miss out on a place in Pep Guardiola’s first XI having faced a race against time to be fit for the lunchtime clash on Saturday, with leaked team news suggesting he will not be starting at the King Power Stadium.

The 22-year-old has featured in every Premier League game this season and has taken the top flight by storm, scoring 17 goals in just 11 appearances at a rate of a goal every 54 minutes.

But the Norwegian talisman is set to miss out on City’s starting XI for their clash against Leicester after being rated as a fitness doubt for the clash by Guardiola.

Haaland was substituted at half time by the Catalan coach during their goalless Champions League draw with Borussia Dortmund and it later emerged Haaland had picked up a foot injury against his former club, with Guardiola admitting he faced a race against time to prove his fitness.

“He feels better, but we train this afternoon, and we will assess in these few hours,” said Guardiola. “We will see how he feels. After we will decide – I will know it in two hours if he can play.

“After the [Dortmund] game everyone trained well. I have to wait for the people coming back to know exactly how they feel.”

Guardiola did confirm that Ederson would be fit to start the game and provided an encouraging update on Kyle Walker and Kalvin Phillips, who are set to miss the rest of City’s games before the World Cup in a bid to recover in time for Gareth Southgate’s squad announcement.

While there is no official confirmation that Haaland is not a guaranteed starter for the game, reports of leaked team news from City suggested that Haaland is out of the squad entirely, while Phil Foden will not be included in the starting XI as Guardiola shuffles the pack.

The news is only likely to infuriate Fantasy Premier League (FPL) managers, with Haaland owned by 8.9million players – a whopping 83 per cent of the total managers in the popular game. Haaland has been a popular captain choice this season after an incredible goalscoring exploits.

But with Haaland now seemingly out of the side, the burden of finding the back of the net may be left to Julian Alvarez, the £18m signing from River Plate. The 22-year-old has already scored twice in the league this season having impressed from the bench and will be looking to impress in his absence.

He is likely to start alongside Jack Grealish and Riyad Mahrez in a much-changed City frontline as Guardiola attempts to leapfrog Arsenal as league leaders, albeit without star man Haaland.