Manchester City vs Everton LIVE: Pep Guardiola’s side look to keep pace with Chelsea and Liverpool at the top of the Premier League… while Toffees battle to get back in top half amid poor form

Pep Guardiola will hope to guide his side to a vital three points against Everton as Manchester City battle to keep pace at the top of the Premier League.

Victory for the home side at the Etihad will move them above Liverpool and within three points of leaders Chelsea, while Rafa Benitez’s Toffees are desperate for a victory to move them back into the top half of the table.

24 mins: Raheem Sterling is starting the game well. The England winger gets down the right and feeds Bernardo Silva.

The Portuguese international’s cross nearly finds Cole Palmer in the box but Ben Godfrey makes an important intervention to clear.

Then Palmer gets down the left himself and he cuts the ball back for Ilkay Gundogan in the box, but the German’s effort is blocked by three Everton men on the stretch. A lot of possession for City, not a great deal of progression or clinical edge.

22 mins: Phil Foden is fine to carry on and impresses with dazzling touch to control the ball down the left while under pressure from Seamus Coleman.

The England winger then whips in a corner that Joao Cancelo can’t quite get a shot away from.

19 mins: Moment of slight concern for Jordan Pickford. Kyle Walker’s deep cross looks like is going to be collected by the England No 1 but the Toffees man drops it before Everton scramble to clear.

Phil Foden then fouls Anthony Gordon by the corner flag and then gets injured himself. He is receiving treatment and looks in similar pain to Demarai Gray has just gone off.

16 mins: Demarai Gray goes straight down the tunnel and he clearly can’t continue.

Alex Iwobi comes on in his place.

15 mins: Rare Everton breakaway as Demarai Gray gets down the left again. He cuts inside onto his right foot and then tries a shot but Kyle Walker blocks the effort.

Gray then goes to ground as the Everton winger appears to have pulled a muscle. Rafa Benitez’s injury list looks like it’s growing…

Raheem Sterling beats Lucas Digne down the right-hand side and clips a ball to the back post for Phil Foden. Foden is reaching for it and can’t quite head it goalwards. Three Lions team-mate Jordan Pickford was stretching for it. 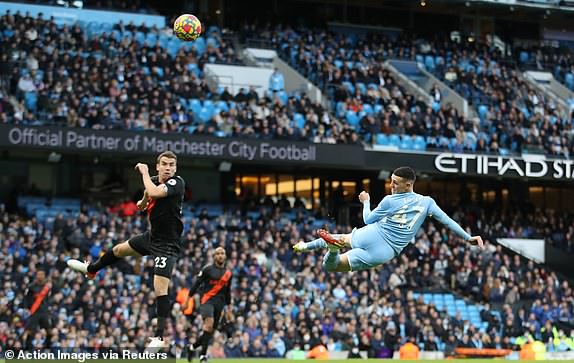 7 mins: First major chance of the game goes to City. Kyle Walker’s cross from the right is cleared as far as Joao Cancelo, who smacks an effort towards goal and Cole Palmer tries to help it on.

Palmer can’t quite connect and Bernardo Silva tries to get on the end of it as well but the overall effort flies wide. City warming up…

4 mins: It looks like Cole Palmer, making his full Premier League debut this afternoon, is starting for City through the middle in a false nine role.

The home side then press Jordan Pickford to smack a long ball straight into touch in the City half. Semi-high intensity to this, but no real chances as of yet.

1 min: First half-chance of the game goes to Everton!

The Toffees win the ball high up in the opening seconds and Demarai Gray drives at the City defence. He feeds Anthony Gordon on the right hand side of the box whose shot is blocked.

City then break and Raheem Sterling is chopped down by Michael Keane on the edge of the box. Phil Foden’s free-kick misses everyone. Basketball start so far. 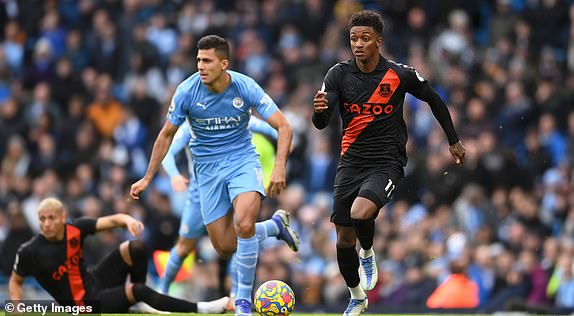 0 mins: We’re underway at the Etihad! Title-chasing City get us up and running… 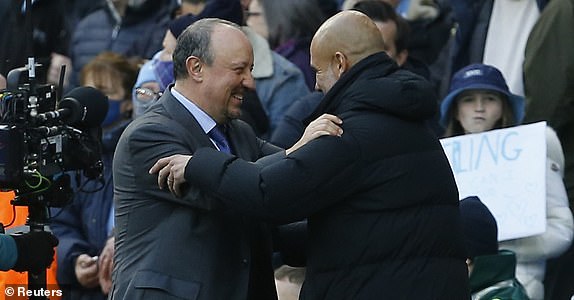 Teams are out at the Etihad. Manchester City have a job to do – stay in touch with Premier League leaders Chelsea who are six points ahead.

Everton, meanwhile, need something to boost the confidence. A win would be ideal, but you reckon they would take a point here.

This is you ten-minute warning for kick-off and here’s a reminder of the two teams this afternoon: 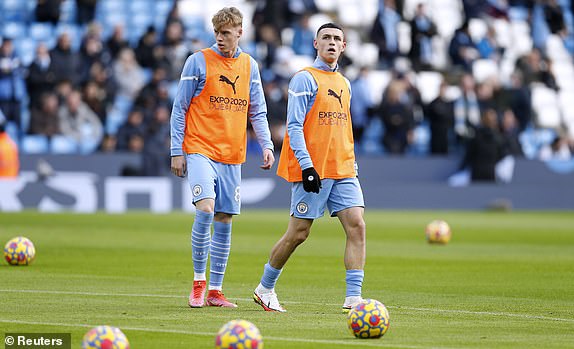 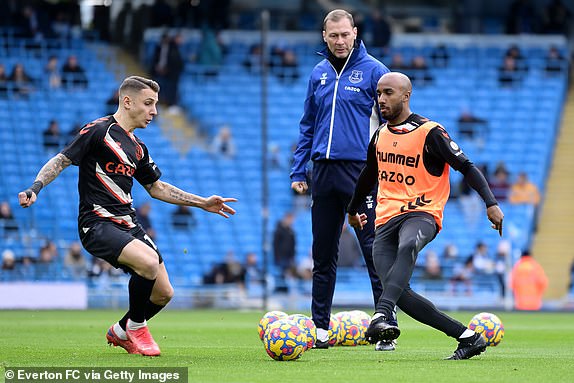 Both sets of players are warming up ahead of this one – and it looks cold at the Etihad Stadium.

If you’re a fan of snood and winter gloves, then these pictures will definitely please you. 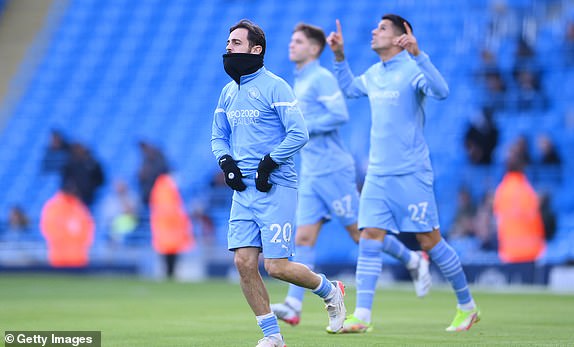 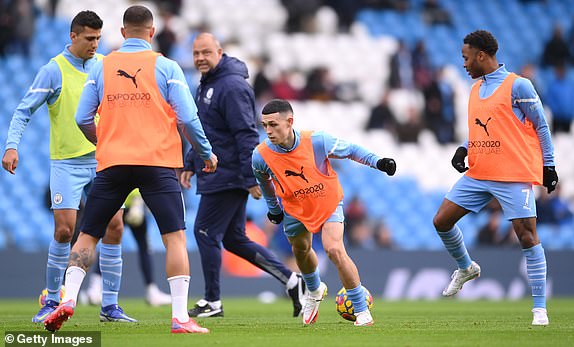 Manchester City are in the groove, Everton are in a bit of a slump. Here’s the pre-match odds going into this game: 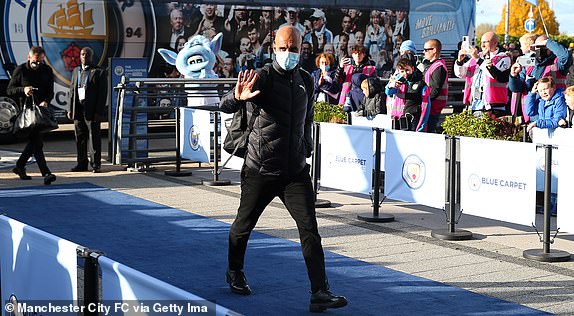 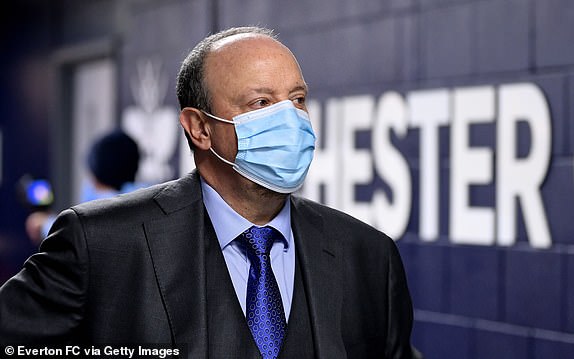 So, what’s going on at Everton?

We’re nearly in December but the Toffees’ last win came on September 25, with Rafa Benitez’s side going on a five-game winless run to drift back towards mid-table yet again.

The Spaniard has been fiery about his team’s mentality in the build-up to this game, claiming ‘You can’t buy character in John Lewis’ in an apparent dig to his own players.

A festive crack at his own team. Love it, Rafa.

Another Man City star trying to make his impact from the off is Portuguese full-back Joao Cancelo, who was man of the match in his side’s 2-0 Manchester derby win at United earlier this month.

Pep Guardiola has been full of praise for the full-back, comparing him to Bayern Munich and Germany icon Phillip Lahm!

There’s a start for Ilkay Gundogan this afternoon, but the Manchester City midfielder was prepared to be dropped for this game if his recent comments are anything to go by.

The German is one of several midfielders competing for three places in Pep Guardiola’s starting line-up – and Gundogan reveals that every single member of City’s squad is expecting to be dropped on a weekly basis.

So, Manchester City are once again chasing the title – but if Saturday’s action is anything to go by then it’s going to be some tough effort.

Chelsea beat Leicester City 3-0 away from home in an impressive result on Saturday lunchtime, while Liverpool smashed Arsenal 4-0 at Anfield to show their title credentials.

Guardiola’s City are now six points behind leaders Chelsea and victory over Everton will halve that deficit.

Do City have enough to win the title again this season? 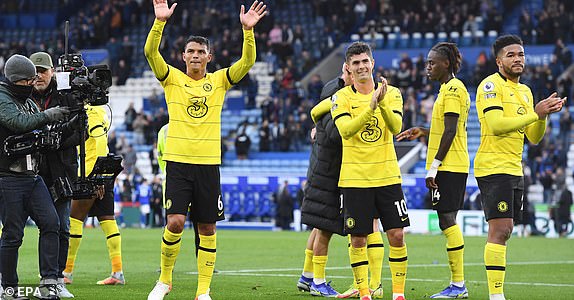 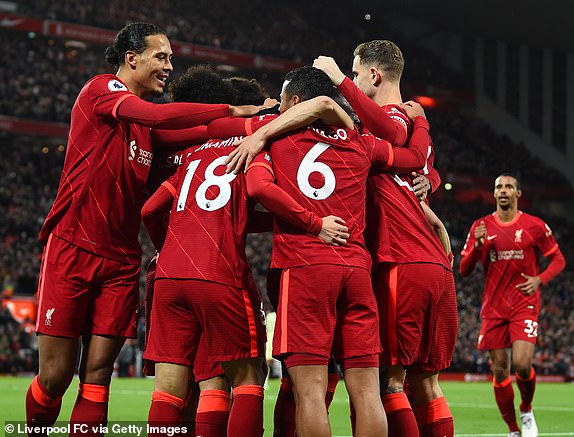 Rafa Benitez’s Everton make just no changes from the side who drew 0-0 versus Tottenham earlier this month.

Anthony Gordon starts on the wing while Ben Godfrey partners Michael Keane at the back. Jordan Pickford makes his 300th career appearance in goal – he may be busy.

There’s always changes when it comes to Pep Guardiola and there’s three here this afternoon.

The big news is that 19-year-old Cole Palmer starts his first Premier League game for Manchester City as he replaces the injured Kevin de Bruyne. Some shoes to fill, but this teenager is tipped to be a special player.

The other change sees Raheem Sterling, who has been linked with a move away from the club next year, come in for Gabriel Jesus who drops to the bench. John Stones keeps his place in the back four as Ruben Dias drops to the bench for the returning Aymeric Laporte.

It’s been a quiet Sunday morning in Manchester, hasn’t it?

No, of course it hasn’t. Ole Gunnar Solskjaer’s sacking by Manchester United has dominated all of this morning’s headlines as the Red Devils go through yet another managerial change in their bid to reach the upper echelons of the Premier League again.

But cast your eyes away from the red half of the city as Pep Guardiola’s top-flight champions are in action this afternoon. Manchester City take on Everton in the first of two Super Sunday clashes this afternoon. 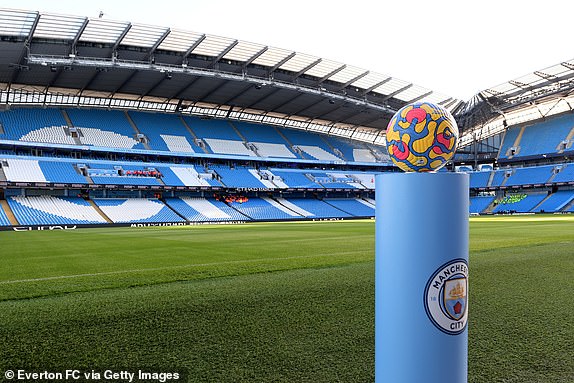 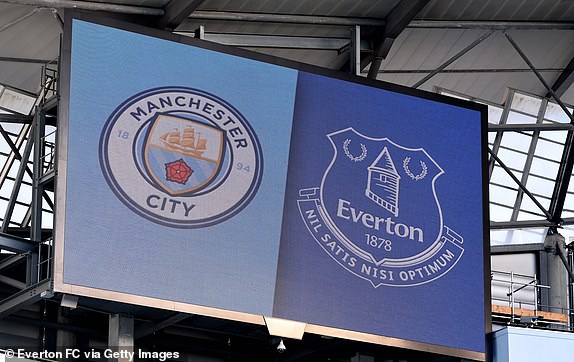