Man Utd: Do club care more about sponsors than cups?

Scott McTominay has lifted the lid on Ole Gunnar Solskjaer’s message which inspired Manchester United to come from behind to beat Tottenham 3-1. The Red Devils were a goal down at the break after Son Heung-min was picked out by Lucas Moura.

Edinson Cavani had an opening goal chalked out after a VAR check, with McTominay adjudged to have fouled Son.

The United players returned to the changing rooms frustrated but Solskjaer installed calmness which allowed them to crack through the gears in the second half.

“The way the game went, we went in at half-time frustrated,” McTominay told Sky Sports. “At half-time the message was clear: just keep calm, no need to panic. We know that we have good character in the team and against a really difficult team, so we’re happy.

“Sometimes that’s the way football goes. For the first 30 minutes by our standards, we were not good enough but we dominated the whole second half to be fair.

“Personally I’m not a fan of VAR but the referees have to make decisions. It was a case of keeping calm. Everybody makes mistakes and that’s part and parcel of it. 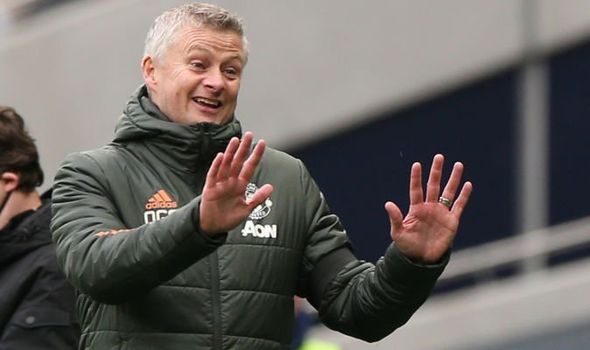 “[The disallowed goal] was a total injustice but you just have to get on with the game. Getting three points in a really difficult game was pleasing.

“Fred was terrific today, along with Paul [Poga] and Mason [Greenwood]. They had real energy and the manager will be pleased with a lot of players today.

“We owed Tottenham a proper game – we had that in our minds – and today was much better than last time.”

Goals from Fred, Cavani and Mason Greenwood secured the three points which cements United’s second place in the table.

The result leaves Tottenham three points outside of the Champions League place and Jose Mourinho had no qualms with the defeat.

“Credit to the opponent. They have good players and lots of quality,” he said. “They have incredible physicality in midfield.

“We lost but I praise my players. We have no complaints. For me it’s very difficult for me to analyse games with the media. I am always criticized when I try to analyse so I prefer to be general.

“To be general, I think we lost against a very good team. I praise my players and my compliments to United.”