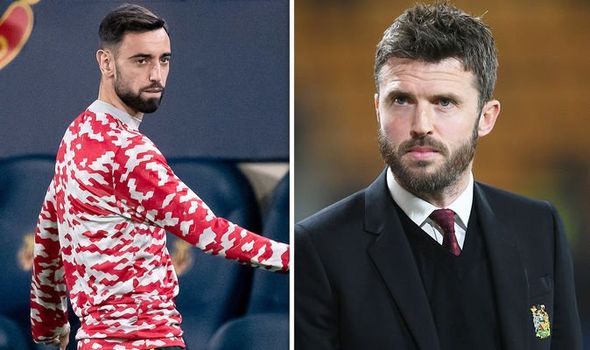 Manchester United caretaker boss Michael Carrick has explained his decision to drop Bruno Fernandes against Villarreal. Fernandes had started the first four group stage matches in the Champions League this season. But the Portugal star was only named among the substitutes in Spain on Tuesday.

Carrick was managing United for the first time since the sacking of Ole Gunnar Solskjaer on Sunday.

The former midfielder brought Donny van de Beek into the starting XI in place of Fernandes.

Asked why he did that, Carrick told BT Sport: “Yeah, both are fantastic players, that’s the beauty of having a good squad.

“I’ve only been in this job for 48 hours, but there are decisions to be made and a team to be picked, I was spoilt for choice really.

“Five subs is a lot to choose in the Champions League, there will be a lot of players to play a big part tonight, and just because a player is on the bench doesn’t mean they’re not important at all.”

Asked if the reason was because Fernandes’ level has dropped, Carrick added: “Who’s that? No, not one of those have been the best, there’s no hiding from that, we know that, but there’s a team to be picked.

“I love Bruno, he’s a fantastic player and a good person.

“He ran his socks off on Saturday, gave absolutely everything, he’s played a lot of games as well.

“It’s a job to pick the team, that’s why I’m here. That’s the team I’ve picked with but it doesn’t mean Bruno isn’t important by any stretch.”