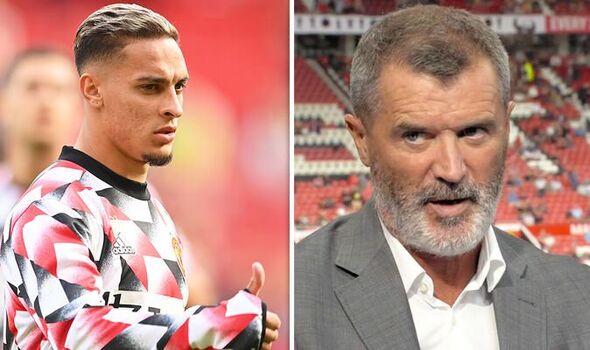 Roy Keane is surprised Manchester United boss Erik ten Hag made a change to a winning formula by starting Antony against Arsenal on Sunday. The £85.5million signing was brought in for Anthony Elanga in the only change to the Red Devils’ starting XI at Old Trafford.

Antony only completed his move to United on Thursday, signing a long-term contract. He arrives at a club who have won their last three Premier League fixtures.

Ten Hag has kept faith with the same XI for those three wins. However, Elanga has been left out in favour of Antony.

Antony played under Ten Hag for two years at Ajax. Keane believes that is a big influence on his decision to bring him straight into the team, though he admits it is a surprise to see a winning team change.

Asked if Antony’s history with Ten Hag is key, Keane said on Sky Sports: “Huge. I think that’s why he’s playing him. He knows the system, he knows the manager, the manager knows the type of character he is.

“I’m surprised he’s made a change from a winning team but he’s paid that big money, he’s come in to play. It’s going to be great to watch him live in a really good game.

“Two good teams and I think he knows the way the manager wants him to play. A straightforward decision from that point.”

Antony has become United’s second-most expensive signing of all time. But Keane says that should have no impact on the player and he is looking forward to seeing him in action.

He added: “That [the fee] is nothing to do with the player, that’s between the clubs to sort out. No doubt a talented player and sometimes when you bring a player in, people talk about adapting to a club, there’s also a benefit to throwing him straight in.

“It’s a good game, it’s a home game, looking forward to watching him.”