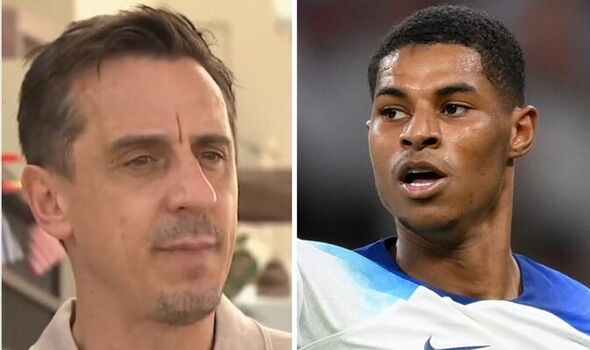 Gary Neville feels as though Manchester United “could never sell” Marcus Rashford with the forward out of contract next summer. Rashford was given his first start of the World Cup for England in their final group game against Wales on Tuesday and the forward hit the headlines with two brilliant goals.

He opened the scoring at the start of the second half with the tournament’s first direct free-kick before doubling his tally later on as England won 3-0. Rashford is now England’s leading scorer at the 2022 World Cup with three goals in as many matches and is joint with Cody Gapko, Enner Valencia and Kylian Mbappe for the golden boot race.

It’s a far cry from where Rashford was barely 12 months ago with the England international coming under heavy scrutiny for his performances at club level. He finished last season with just five goals in all competitions – his worst return in a full campaign since making his debut in 2015.

And questions are now being asked of his future at Old Trafford with little over six months remaining on his contract. United are expected to open talks on an extension after the World Cup, but clubs all over Europe will be paying attention to the situation to see whether a transfer would be possible.

However, Neville doesn’t want the Glazers to entertain the possibility of selling Rashford at any price. “There were people in the last 12 to 18 months who said Marcus Rashford needed to be sold by Manchester United,” Neville told Sky Sports.

“That was never bought into by me. Manchester United could never sell Marcus Rashford. He’s a massive talent. Yep, he can improve, he will continue to improve, but it’s great to see him in an England shirt.”

Rashford will now be hoping he keeps his place in England’s starting line-up to face Senegal in the World Cup last-16 fixture on Sunday. But Neville believes Rashford is now “guaranteed” to start alongside Harry Kane up top.

“I worried a little bit in the first half when he missed that chance and I thought whether that would play on his mind, but I was delighted he got the two goals in the second half,” he added. “I think he’s pushed himself into a position whereby he’s the one I think will start on Sunday.

“He’s the one I think guaranteed to start on that wide position with obviously Harry Kane in the middle, but it’s that other side I’m not sure who will take the position.”