Manchester United midfielder Bruno Fernandes had admitted that Edinson Cavani’s wonder strike against Fulham should not have stood.

The Red Devils played out a 1-1 draw with Scott Parker’s side on Tuesday evening and captured the lead in controversial fashion.

A long ball forward from David De Gea was deemed to have been flicked on by Fernandes before finding its way to Cavani, though replays proved the Portugal international did not make contact with the ball.

It was De Gea’s pass that reached Cavani, but the Uruguayan was stood in an offside position and therefore his long-range lob over Fulham keeper Alphonse Areola should have been overruled by VAR.

Speaking after the match, Fernandes conceded that he didn’t feel he had connected with the ball before it made its way to his teammate. 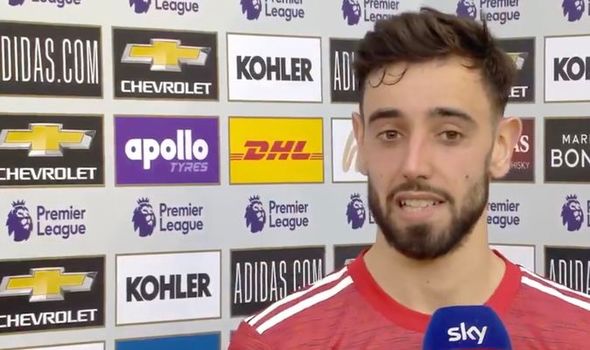 “Honestly I don’t know. In the moment I don’t think I touched the ball. I didn’t see the replay. I have to see it. The referee said I touched the ball and that was the point to make it onside,” he told Sky Sports.

“He’s a top striker so for me it’s normal,” added Fernandes on the finish from Cavani.

Fernandes also praised the return of supporters, as United were loudly cheered on by 10,000 fans inside Old Trafford after the relaxing of coronavirus restrictions. It was the first time the Red Devils had played in front of fans since securing a 2-0 derby victory over Manchester City on March 8, 2020.

“[It was] Really nice. Everyone knows always the feeling for the players having the fans in the stadium. We play more than one year without them. We miss them.

“It was unlucky for us and for them we don’t get the result we want to give to the fans today,” said the 26-year-old.

“I think the performance was there for them, but at the end of the day you want results and today was not the best result we could get.

“The support of our fans is always good. The atmosphere is always good, and it makes you feel better. Probably some players can lift. The support from them is really nice. When you think you have no power, they are there lifting you a little bit more and you can take the power from them.”