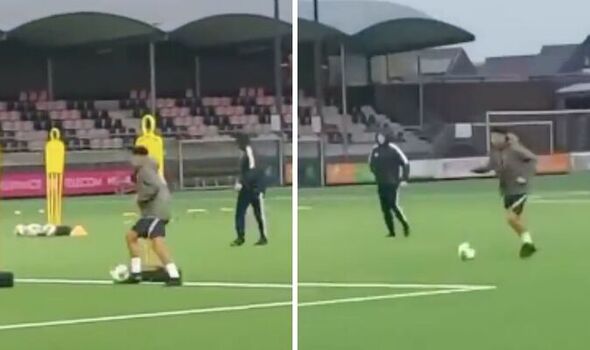 Jadon Sancho has mysteriously been spotted putting in the extra yards during his very own private training session at OJC Rosmalen in Holland. The Manchester United winger is said to be focused on returning to form after his latest setback as he was overlooked by Gareth Southgate for England’s 26-man World Cup squad for Qatar.

Unfortunately for Sancho, he was one of the easy omissions for the Three Lions boss due to his lack of sharpness in the Premier League this season under Erik ten Hag.

That doesn’t mean the emotional impact of missing out on the tournament should be underestimated though after Sancho recently shut off his Instagram count.

It’s understood the decision was made by the player to maximise his focus and commitment to turning things around after scoring just twice in 10 Premier League outings this season.

Now Sancho has been spotted training at the facilities of North Brabant amateur side Rosmalen in Holland, where he is knuckling down to improve his conditioning ahead of club football’s return.

Video footage on social media shows Sancho out on an artificial pitch, dribbling around a mannequin.

It appears he also has a coach alongside him, who is believed to have been recommended by United head coach Ten Hag.

Sancho missed his side’s last few matches before the mid-season break due to illness as he looks to put a difficult season behind him.

OJC Rosmalen sent the player their well-wishes on Twitter, writing: “We hope you had a pleasant training with us! You are always welcome to train with us and have a good time.”

United are set to resume training in the next week or so as they prepare to head to Spain for a seven-day training camp.

The Red Devils will face La Liga side Cadiz and Real Betis before returning to action in the Carabao Cup against Burnley at Old Trafford later in December.

Ten Hag’s side then host Nottingham Forest on December 27 as Premier League football makes its return after the World Cup.

Speaking after England’s 6-2 win over Iran, Holland midfielder Nigel de Jong claimed Jude Bellingham is destined to follow a different path to Sancho in the Premier League because he has a “far better head on his shoulders.”

“I think [he’s ready for the Premier League] as well, but I would prefer him to go to Bayern Munich because that’s the extra step in the development of a player, structure-wise but also playing for the big prizes,” explained De Jong, in praise of Bellingham.

“I don’t want to disrespect Dortmund in that sense, but as an organisation Bayern is the pinnacle when it comes down to it.

‘If I’m really honest with you and I look at the personality Jude Bellingham has already at 18 or 19 years old, he has by far a better head on his shoulders [than Sancho].

“When it comes down to the humility that he has but also the cleverness and intelligence that he has, knowing what it takes in order to be the best midfielder in the world.