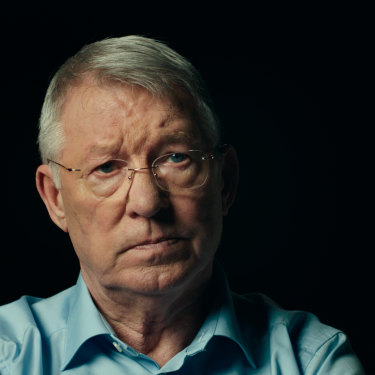 Jason Ferguson turns the spotlight on his father in a documentary that traverses the career highs and lows, and the forces that shaped one of the most successful managers in the history of soccer. Credit:Will Pugh

His career was littered with more silverware than Buckingham Palace after a tea party, but Sir Alex Ferguson doesn’t hesitate when asked to pick his proudest moment.

He’s referring to the Champions League final of 1999, when his Manchester United side came from behind to score two goals in injury time and snatch the trophy out of the disbelieving grasp of Bayern Munich, thereby clinching the first treble – Premier League title, FA Cup and Champions League – by an English side in a single season.

It was heartstopping stuff – and, for Bayern fans, absolutely heartbreaking. 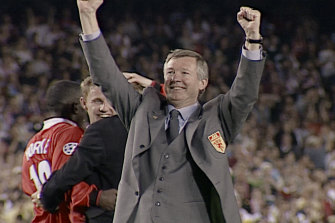 The impossible dream: The moment Alex Ferguson, manager of Manchester United, realised his team had snatched victory from the jaws of defeat in the 1999 Champions League final against Bayern MunichCredit:UEFA

“They were the better team but we kept going, we kept trying, and finally to win in extra time – the way it was done typified Manchester United and myself,” says Ferguson over a Zoom call from his home in Cheshire, England.

“We never gave in. That game, that night, the whole thing was unbelievable. It gave you great faith in the very idea that if you really keep trying, never give in, you can achieve.”

Never Give In is, not coincidentally, the title of the documentary made by Jason Ferguson about his father’s towering career, which included 26 years and 13 Premier League titles (and a second Champions League victory) as United manager before his retirement in 2013. And for the most part, it avoids the pitfalls of hagiography, despite (or perhaps because of) the closeness of director and subject.

The project was born out of a series of chats between the pair, recorded in Jason’s back room from early 2016. “We spent 18 months doing that and ended up with over 70 hours of audio,” says Jason, who is also on the Zoom call.

Producer Andrew Macdonald (frequent collaborator of Danny Trainspotting Boyle and Alex Ex-Machina Garland) thought there was the basis of a documentary in all this, and one night in May 2018, Jason called him to say he was up for it. The following day his father had a massive brain haemorrhage.

Sir Alex, who is 79, says he is “perfectly all right” now, but for a while it didn’t look like he would be. When he awoke in hospital, he couldn’t speak; it took 10 days for his voice to come back. Even more terrifying was the possibility he had lost his memory forever.

“I couldn’t handle it if I’d lost my memory because it was something I’d relied on all my life as a manager,” he says. “You’ll see now coaches on the sidelines taking notes during games – I could never do that. I always relied on my own memory.”

There’s a real sense in the film of wanting to get it all down before it’s too late, triggered by the realisation of how fragile even a life so feted can be. There’s also an intriguing interplay between memory, which is a deeply personal thing, and legacy, which transcends the individual.

“The film was always going to have an element of someone looking back on their life, but that event gave it something more tangible to hang it on,” says Jason. “But I never really approached it from the point of view of ‘legacy’. My intention was to get past that perception of who he is as a figurehead and get to who he is as a person.”

Of course there’s no escaping the big moments of success, but the most revealing glimpses into the soul of Sir Alex come from the opposite end of the spectrum, the failures and disappointments.

There’s the fulfilment of his boyhood dream to play for Rangers, whose legendary Ibrox stadium stood just a couple of hundred metres from his front door. Ferguson was a more than handy striker, netting 171 times in a 317-game professional career at half a dozen clubs, but the Rangers dream turned to nightmare when much of the blame for their 4-0 loss to arch-rivals Celtic in the 1969 Scottish Cup final was heaped on his shoulders. He never played for the team again. 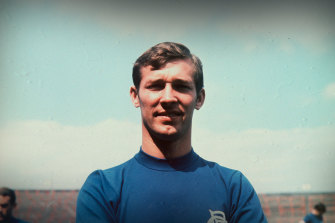 Ferguson fulfilled a boyhood dream by joining Rangers in 1969, but after just 41 games his career with the club was over.Credit:Mirrorpix

There’s a sense in the film that the rejection Ferguson suffered there was a hugely motivating factor in his managerial career. And for Jason, that came as a surprise.

“I was aware it was a negative, for want of a better word, for him in his playing career, but I didn’t realise until we sat down and started going through stuff in more depth and detail the impact it had on him, to have joined the club he supported as a boy and for it to end the way it did. It ran deeper than I had envisaged.”

It certainly fuelled a desire to prove something to the club that rejected him. “It wasn’t so much revenge, but a desire to let them know I’d done well,” says Sir Alex. “A lot of people leave a big club and just disappear in life.” That was never going to be his way.

Famously, that desire could express itself as fury. He frequently subjected his players at Old Trafford to “the hairdryer treatment” after poor performances, once going so far as to kick a boot at David Beckham (on target, too; Beckham apparently suffered a small wound over his left eye – and made sure everyone knew about it thanks to a rather ostentatious X-shaped plaster). 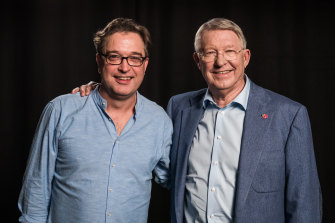 It wasn’t so much anger, insists Sir Alex, as disappointment. “When we didn’t win I felt they’d let themselves, and their expectations, down, and so I did lose my temper, and I was brutal and I was honest.”

He says the perception he was always raging at his players is a myth, “but an understandable myth”. In truth, he insists, “not one of them regretted the way it was. They all enjoyed the fact we were a great winning team, great careers, they won medals, they were well paid. Not once did my players or my team play with fear. They played with expression, they played with enjoyment, and they played to win.” 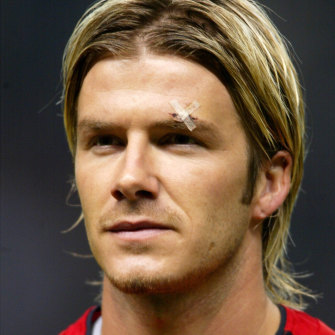 David Beckham sports a plaster over his eyebrow after the infamous boot-kicking incident in the dressing room. Credit:Martin Rickett

Perhaps the toughest decision he ever had to make was dropping goalkeeper Jim Leighton for the 1990 FA Cup final replay. He’d had a shocker in the first game, and was enduring a run of bad form, and United desperately wanted to win silverware (and Ferguson desperately needed to do so in order to keep his job after five trophy-less seasons in charge). But Leighton had been with Ferguson since he was a teenager at Aberdeen, where he’d began his long run of managerial success, and theirs was as close to friendship as a manager-player relationship can be.

“Having to make a decision like that was a killer for me,” says Sir Alex. “It could be regarded by Jim, and I think it was, that I betrayed him. But the thing is I was the manager of Manchester United and I had to make decisions that were for Manchester United. For Jim it was the end of the relationship between us, and I regret that, but I don’t understand it because he knew I could make decisions like that, and he’d seen it many times before.”

Just as “never give in” might summarise the attitude he tried to instil in his teams, if you were to boil Alex Ferguson’s management philosophy down to a single word it clearly would be “honesty”, no matter how uncomfortable it might be.

“I’m sure if I was a player I wouldn’t enjoy getting slaughtered in the dressing room by the manager, that’s a fact,” he concedes. “But if I knew he was honest with me I would accept it.”

Sir Alex Ferguson: Never Give In is in cinemas now

Find out the next TV, streaming series and movies to add to your must-sees. Get The Watchlist delivered every Thursday.