They are Marcus Rashford’s player ratings issued by Sportsmail’s reporters in every game he’s started since his return from shoulder surgery. The odd stinker amid a handful of ordinary outings, it is not enough to say he must stay a starter for Manchester United.

United won and kept another clean sheet under Ralf Rangnick, though it was not a dominant performance against the Premier League’s bottom side. Far from it, and Rangnick described his disappointment at the players’ body language afterwards. 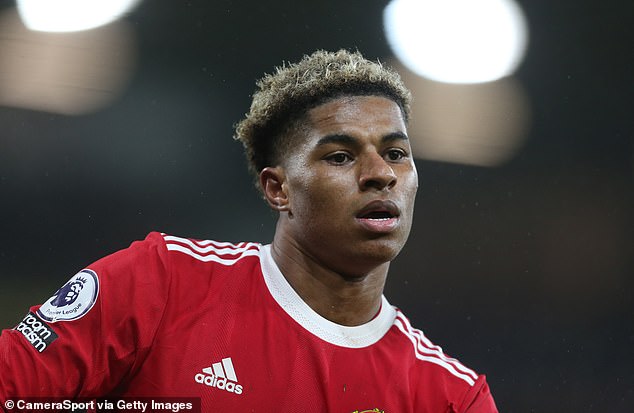 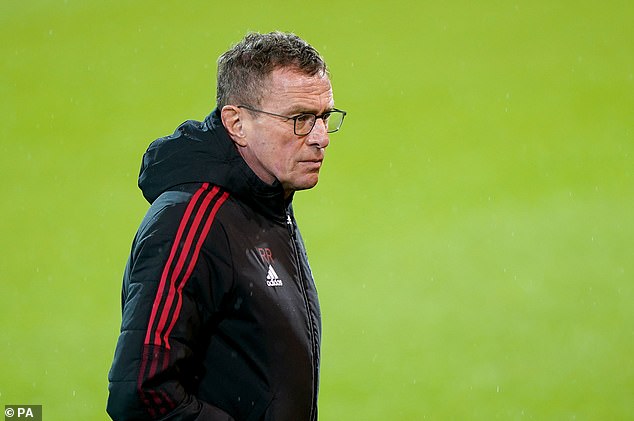 The German coach gave Rashford the full 90 minutes, but he rarely threatened at Carrow Road

He singled out the ‘offensive department’ for their lack of intensity, and Rashford was not the only poor performer on Saturday.

Jadon Sancho was timid, as if scared of letting down the new boss, deciding to play safe instead of driving at the opposition like the £73million winger he’s supposed to be. Bruno Fernandes was wasteful and Cristiano Ronaldo, though the scorer of the winner from the penalty spot, was ballooning chances from six yards.

It was a mediocre game for many in red shirts but this was not Rashford’s first poor display. He has endured a few of these in his eight starts since surgery in August. His last goal was in October.

Watching him repeatedly run into traffic, lose the ball and fail to threaten a makeshift Norwich back line that included a midfielder at centre back, you asked yourself: what has happened to Rashford?

Maybe he is holding himself back, nervous about placing the responsibility of a post-Ole Gunnar Solskjaer era on a shoulder still sensitive from the operation. Maybe it is an attitude issue or maybe the tactics are not suited to his style. Maybe it is just the kind of bad patch which any player can experience, especially those who are judged on scoring goals.

Whatever it is, part of Rangnick’s role in the next six months is to revive Rashford. That may need to be via the substitutes’ bench if it is decided Ronaldo would benefit better from having Edinson Cavani or Mason Greenwood beside him. Who fronts the 4-2-2-2 formation is becoming an issue for the new boss. 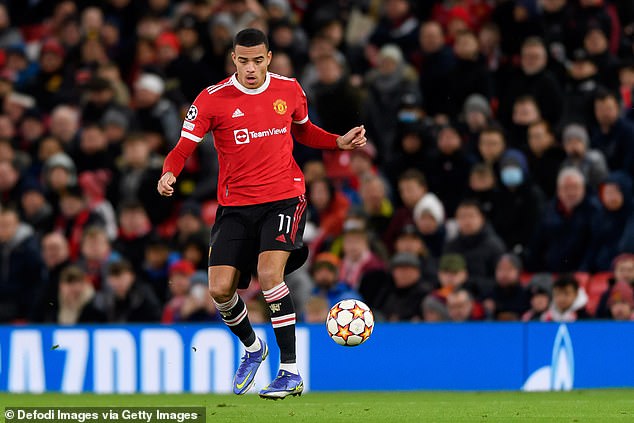 The better news for Rangnick is that, even though Ronaldo was not at his best, he still knows how to have a defining impact and settle a match. He won the penalty — Max Aarons’ decision to wrap his arm around his opponent’s neck was a silly one — and then scored it himself.

Sancho lasted 67 minutes before he was replaced by Greenwood, while Rashford played the full 90.

Afterwards there was a debate on social media about who is the better forward, Rashford or Anthony Martial? The latter’s agent says he wants to leave the club but plenty of fans say they would rather the former makes way.

There is a fantastic player in Rashford, who is still only 24 years old. We have seen him score and assist and create and run himself ragged enough times for club and country to know that.

It just feels like a while since we saw that side to him. United’s fixtures between now and the new year are inviting: Brentford, Brighton, Newcastle and Burnley. Rashford will want to play and if he does, he needs to shake himself out of this slump.