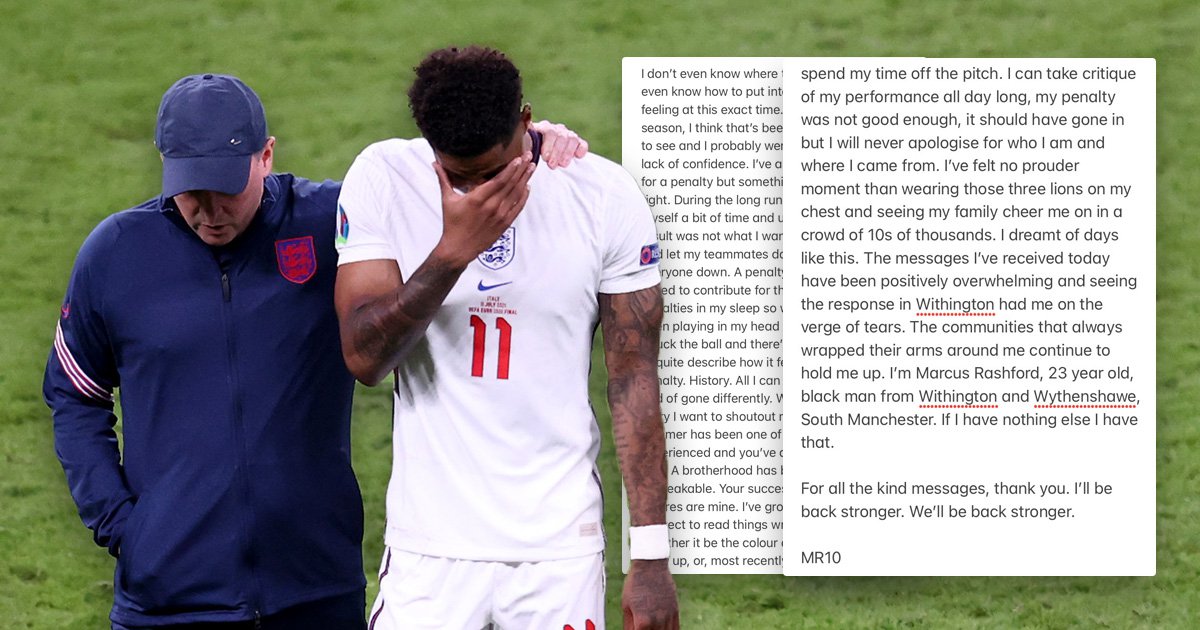 Marcus Rashford has vowed to come back stronger in an emotional open letter after missing his penalty in England’s Euro 2020 final defeat to Italy, also thanking the majority of fans for their support after he was racially abused following the game.

The Manchester United forward – who has raised millions for charity during the pandemic and forced a government U-turn over free school meals – was subbed on deep into extra-time specifically to take a spot-kick, but the usually nerveless striker dragged his shot against the outside of the post.

Teammates Jadon Sancho and Bukayo Saka also saw their efforts saved and the trio were all subjected to vile racist abuse on social media afterwards, while a mural of Rashford was defaced – though the abusive graffiti was later covered with supportive messages and pictures.

Rashford, who has been carrying an injury for much of this year, apologised for not scoring his penalty but stood defiant against the abuse he received, speaking proudly about his roots and thanking fans for the support he has received after a heartbreaking 24 hours.

‘I’ve had a difficult season, I think that’s been clear for everyone to see and I probably went into that final with a lack of confidence.

‘I’ve always backed myself for a penalty but something didn’t feel quite right. During the run up I was saving myself a bit of time and unfortunately the result was not what I wanted.

‘I felt as though I had let my teammates down. I felt as if I’d let everyone down.

‘A penalty was all I’d been asked to contribute for the team. I can score penalties in my sleep so why not that one? It’s been playing in my head over and over since I struck the ball and there’s probably not a word to quite describe how it feels.

‘Final. 55 years. One penalty. History. All I can say is sorry. I wish it had gone differently.

‘Whilst I continue to say sorry I want to shoutout to my teammates. This summer has been one of the best camps I’ve experienced and you’ve all played a role in that. A brotherhood has been built that is unbreakable. Your success is my success. Your failures are mine.

‘The messages I’ve received today have been positively overwhelming and seeing the response in Withington had me on the verge of tears. The communities that always wrapped their arms around me continue to hold me up.

‘I’m Marcus Rashford, 23 years old, black man from Withington and Wythenshawe, South Manchester. If I have nothing else I have that.