Martin Odegaard was surrounded. Declan Rice and Said Benrahma were closing in on either side; Issa Diop blocking his route forward. He had received Thomas Partey’s pass in a pocket of space near the centre circle but that space was rapidly contracting.

Odegaard barely had time to think let alone act. But with a drop of the shoulder and a sudden change of direction, he eluded all three of them. With his next, impeccably-judged touch, he skipped over the outstretched leg of Tomas Soucek to make it four.

Escape act complete, the space now opening up around him, Odegaard scanned left and right then lifted a diagonal pass out to the onrushing Calum Chambers. Another player – any other player – wouldn’t have made it that far. But Odegaard is different.

The 22-year-old brought calm amid the chaos of Sunday’s 3-3 draw with West Ham at the London Stadium. “When everyone was a little bit trembling, he gave us that composure on the ball,” said Mikel Arteta afterwards. There were no goals or assists from him. He didn’t win the man of the match award either, with Sky Sports pundit Jamie Carragher opting for Chambers instead. 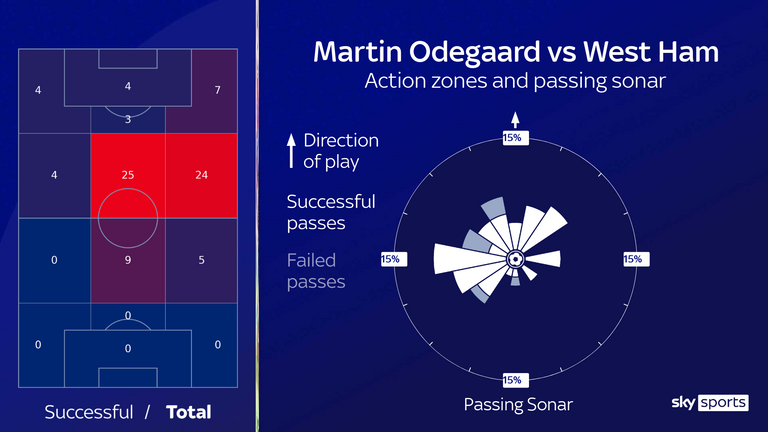 But who fed the right-back more times than anyone else? Who played the pass before the pass for every Arsenal goal? And who celebrated the equaliser, when it finally arrived, by running straight back towards his own half, ready to lead the charge for a winner?

Odegaard was Arsenal’s saviour on Sunday and while the winner never quite came, it was only thanks to him that they were in that position at all after the shambolic opening half-hour during which they essentially gave West Ham a three-goal head start.

That calamitous opening spell was just the latest reminder of Arsenal’s capacity for self-destruction. But at least in Odegaard, a January loan signing from Real Madrid, they have a player capable of inflicting similar levels of destruction at the right end of the pitch.

Everything went through him on Sunday and that moment of skill and composure in first-half stoppage time, when he eluded four West Ham players in the space of a few seconds, was just one example.

By the end, he had created more chances and completed more dribbles than anyone else on the pitch. There were 60 passes in West Ham’s half in total and 16 into their box – the second-highest total by any Arsenal player in any game all season. 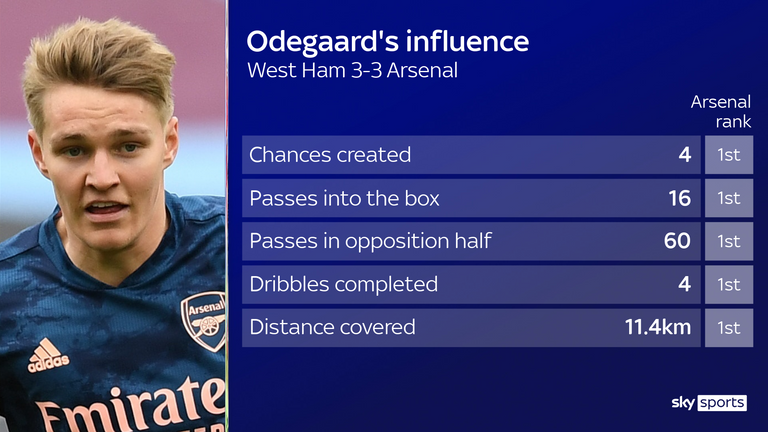 Many of them had supporters purring. The disguised pass to release Chambers in the build-up to Arsenal’s second was outstanding and the one to put Nicolas Pepe through on goal in the dying minutes was arguably even better. It certainly deserved a better finish.

It was Odegaard’s best performance since his arrival at Arsenal but he has shone from the start, his importance to the side growing from one game to the next.

His goals against Tottenham and Olympiakos are his most talked-about contributions so far but the West Ham game was not the first in which he has orchestrated almost every attack.

In fact, Opta’s data for passing sequences show he has been involved in more sequences ending in a shot than any other Arsenal player since his first start in the 4-2 win over Leeds last month. “He has helped us to bind the lines together as a team,” said Arteta in conversation with Sky Sports last week.

The Arsenal manager also cited his “intelligence”. Odegaard has that rare knack of knowing exactly where to position himself to receive a pass. He can also wriggle his way out of tight spaces and see gaps other players can’t. Not everything comes off for him, but he always wants the ball and always tries to make things happen.

Arsenal have benefitted immensely from those attributes – their attacking performances since his arrival, according to the underlying data for chance creation, have been better than at any other point of Arteta’s reign – and so have the players around him.

Much was made of how his arrival would impact Emile Smith Rowe, but the academy graduate, who tends to drift to wide areas from the No 10 position anyway, has continued to impress alongside him on the left. Arsenal have won three of the four games the pair have started together and drawn the other.

Odegaard already looks to have established himself at No 10 but it’s the work he does off the ball that makes him such a good fit for Arteta’s side. When asked last week what exactly he has brought to Arsenal, it was the first thing the manager mentioned.

“He’s given us incredible work-rate because the boy works so hard,” Arteta told Sky Sports. “He’s the right personality for the dressing room – really humble and hard-working. He gets on really well with everyone and he loves to play football, which is why we are here.”

Odegaard covered more ground than any other Arsenal player against West Ham, according to Premier League tracking data, and it was the same story against Tottenham a week earlier.

Since his debut in January, he has averaged 12.1 kilometres per game – half a kilometre more than any other Arsenal player.

It is difficult to imagine that level of industry from the departed Mesut Ozil and it should also be noted that Odegaard is not just running for the sake of running. There is intelligence to his defensive work too. “He commands the pressing,” said Arteta on Sunday.

The Norwegian, recently named captain of his country’s international side, has won possession in the final third more times than any other Arsenal player since his full debut and can frequently be seen directing his team-mates off the ball.

“He looks shy and humble but when he steps on that pitch, he is a real character,” added Arteta on Sunday.

The question, of course, is for how much longer Arsenal will benefit from his presence.

Watching Odegaard now, it is difficult to fathom how Real Madrid couldn’t find room for him. The youngster was outstanding while on loan at Real Sociedad last season but he has played more league minutes in the last two weeks at Arsenal than he managed in the first four months of the campaign with Madrid.

Perhaps his parent club will change their minds. Odegaard is due to return to the Bernabeu in the summer after all. But even if they don’t, there seems little chance of Arsenal having a clear run at him. Especially with Premier League rivals also hunting new recruits.

“At the moment we are just focused to get the best out of Martin and really pleased with what he’s doing,” Arteta told Sky Sports last week. “He can still improve a lot. He knows that and he has got that ambition. He’s not our player after this summer, so we can just talk about what we do now with him.”

What Arsenal do have in their favour, of course, is that Odegaard is clearly enjoying his time in north London. “We have some players who are really good at bringing people in and making them feel welcome straight away,” added Arteta last week.

“He talked about a family, that he sees us as like a family, and that’s a great way to feel with someone that comes from a different club, that he’s got such a feeling straight away. So, thanks to the players and the staff for giving that feeling.”

It remains to be seen whether that family feeling is enough to convince Odegaard to return to Arsenal when his loan spell ends and the summer arrives. But there is much still to do before then – and, on the evidence of his performance at the London Stadium, much more of Martin Odegaard still to enjoy.