Home » Soccer » Mary Fowler is a superstar in the making at just 18. Can the Matildas get the best out of her?

Mary Fowler has the world at her feet. Still only 18, the Matildas prodigy has racked up 17 international caps and nearly two full seasons of experience in the French Division 1 for Montpellier. With every passing performance, the praise comes thicker and faster for her, and from increasingly reputable sources – like national teammate Sam Kerr, who told AAP this week that Fowler was “honestly unbelievable”, the best finisher in the Australian team, and bound to become a world-class player.

Such lofty talk is nothing new when it comes to Fowler. Ex-Matildas coach Alen Stajcic called her the most talented female he’d ever seen in Australia when she emerged, almost out of nowhere, in 2018 to make her debut for Australia at the age of 15. After only a handful of games in the W-League, she’d been dubbed the next Sam Kerr. This week, US defender Abby Dahlkemper volunteered her name as one of the emergent threats in the Matildas team. 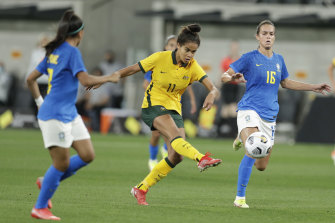 Mary Fowler’s star is on the rise.Credit:AP

The story of Fowler’s unique development – the hours upon hours of freestyle training with her four siblings, and their insatiable commitment to getting better every day – has already been told. The evidence is now almost overwhelming that it has set her up for a shot at greatness.

“I continuously focus on what I need to improve on in this moment,” Fowler told the Herald, providing a rare window into her mindset. “I know in the back of my mind, the Women’s World Cup is my goal in a bigger-picture sense. I have a whole two years to become an even better player, so as much as I am excited to be there, I don’t have a single moment to waste. The focus is on smaller time frames. What can I improve on in a month? In three months? And with this mindset, I know I’ll be a better player in two years’ time.”

Fowler has very quickly become one of the first names on Matildas coach Tony Gustavsson’s team sheet. All five of her international goals have come under the affable Swede, who has used her in each of his 14 matches in charge so far. At the Olympics, she scored the goal that put Australia in front against Great Britain in the quarter-final.

“Tony is really passionate about football and he’s super intelligent. It’s been a blessing to be able to work with and play for a coach with so much knowledge and a willingness to win,” she said. “He’s really allowed me to play with freedom and embrace the qualities that make me who I am. I believe in him and trust in his decisions and to have been given so much belief and trust from him gives me so much confidence moving forward.” 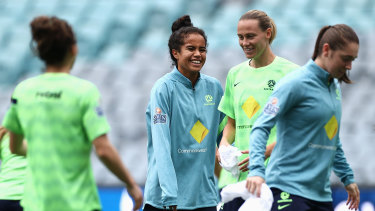 Mary Fowler shares a laugh with teammates at training on Friday.Credit:Getty

The question for Gustavsson, though, is how best to use her. Fowler is a natural striker, but her wide range of gifts – her vision, close control, tactical awareness and ability to confidently finish all types of chances – lends a flexibility to her game. As such, Gustavsson has used Fowler out wide, in various midfield roles, and even as a centre forward during this experimental phase of selection.

Ideally, Gustavsson would be settling on a full-time spot for Fowler – most likely next to Kerr as a classic “second striker”, where her creative and goalscoring instincts could be best harnessed, and so she can begin bedding down combinations with those around her. Since he has insisted on treating Saturday’s friendly against the United States as a full-blown dress rehearsal for the 2023 Women’s World Cup final, which will also be played at Stadium Australia, the time should really be now.

But the Matildas are dealing with a mini-crisis, with around a quarter of the current squad unable to train late this week due to fitness issues, and at least three players ruled out of the clash. Defender Alanna Kennedy is one, but Gustavsson did not want to disclose other names in fear of giving the US an advantage.

He did, however, confirm Kerr trained alone on Friday as she tends to a minor injury. That may mean another shift for Fowler. In any case, Gustavsson believes she is more than good enough to cope with the continued disruption.

“She can be a multi-functional player for us because she has the mindset. She doesn’t stress out about being moved around because she’s very confident in her ability and she’s very smart tactically,” he said. “Maybe in a perfect world, come World Cup ’23, I do think that if we can find the best spot possible and work more on cohesion and chemistry, that would be beneficial. But I’m not scared of moving Mary around either.”