The Matildas have been handed a brutal reminder of what it will take to win a medal in Tokyo after a 5-2 defeat to reigning Olympic champions Germany in Tony Gustavsson’s first game in charge.

The friendly in Wiesbaden early on Sunday morning (AEST) ended a year-long stretch of inactivity for Australia, and there were plenty of cobwebs as expected – but not so for the world no.2 Germans, who piled on four second-half goals to run out richly-deserving winners. 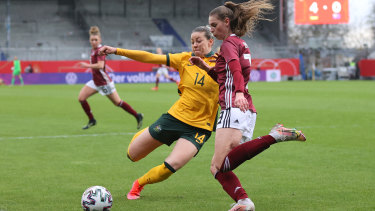 Alanna Kennedy of Australia and Jule Brand of Germany battle for the ball.Credit:Getty

Gustavsson, who has had to wait six long months since being appointed to the role to finally take the reins in a match, was eager for the toughest schedule possible to prepare his players for their assault on Tokyo in three months’ time.

But he was also realistic about the chances of a positive result, in light of the numerous obstacles facing his side – including match-day travel from the Netherlands – and the calibre of their opponents, who won gold at the Rio Olympics in 2016 and reached the quarter-finals of the 2019 Women’s World Cup.

Skipper Sam Kerr was left isolated up front as the Matildas struggled to retain possession, generating few meaningful chances – aside from a late brace from Emily Gielnik – while they were far too easily picked apart in defence.

Teenage sensation Mary Fowler showed she could be a key player for many years to come with some brilliant touches in an unfamiliar midfield role, strengthening her case for selection in Australia’s 18-player squad for the Olympics – but few other individuals were able to showcase their strong club form in green and gold.

With W-League players not considered for selection due to travel difficulties – and first-choice fullbacks Ellie Carpenter and Steph Catley both sidelined – Gustavsson was forced to experiment with his starting XI, naming Karly Roestbakken on the left side of defence and Hayley Raso, an attack-minded winger, on the right. 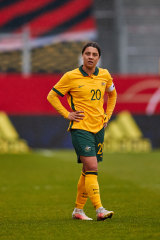 Germany had their own curveballs to deal with – mere hours before kick-off, defender Felicitas Rauch returned a positive COVID-19 test, forcing her and three other teammates who were deemed to be close contacts into self-isolation.

But having played together six times since the onset of the pandemic – in contrast with Australia, who weren’t even able to assemble for a training camp until last week – their cohesion and quality was clear, and they took the lead in the 11th minute after pouncing on a series of lapses at the back.

Some slick combination play after a throw-in enabled Tabea Waßmuth to get past Roestbakken and make a surging run down the right flank before launching a cross from the byline. 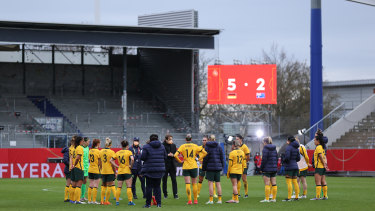 Players of Australia huddle on the pitch following the Women’s International Friendly match between Germany and Australia.Credit:Getty

Aivi Luik had the chance to clear the danger but overran the ball, opening the door for Sjoeke Nusken to swoop and fire the ball past Lydia Williams.

Roestbakken did not last much longer, succumbing to an ankle injury and forcing Gustavsson into an unexpected early change.

He called upon the uncapped Beattie Goad, a former W-League player for Melbourne Victory and Melbourne City who currently plays for Stanford University in the US college system, and made two key interventions to snuff out German attacks in the first half.

But two minutes into the second stanza, Germany made it 2-0 when Kathrin Heindrich swept home a clever cross from Sara Däbritz.

It threatened to get ugly after the hour mark, when substitute Jule Brand came on for her international debut and within three minutes, had both a goal and an assist for Laura Freigang to her name, while a clinical strike from Linda Dallman provided their fifth in the first minute of added time – and there could have been more for Germany, with several other shots hitting the woodwork.

Gielnik, at least, was able to restore some respectability to the scoreline in the 82nd minute by forcing a rare error from a defender and converting from close range, before providing an instant response to Dallman’s strike with a powerful header for her second.

The Matildas have one more friendly to come in this international window, on Wednesday morning (AEST) against the current European champions the Netherlands.