‘I do not see anyone taking charge there… he has to get the team behind him’: German legend Lothar Matthaus claims under-fire Bayern boss Niko Kovac risks losing the dressing room

Niko Kovac does not have the support of his players and is close to losing the dressing room at Bayern Munich, according to club legend Lothar Matthaus.

The Bundesliga giants have endured a topsy-turvy start to the campaign, winning their first four before a barren spell which saw them fail to win four of their next six.

With table-toppers Borussia Dortmund up next in the Bundesliga, the pressure is mounting on Kovac and Matthaus believes time may be running out. 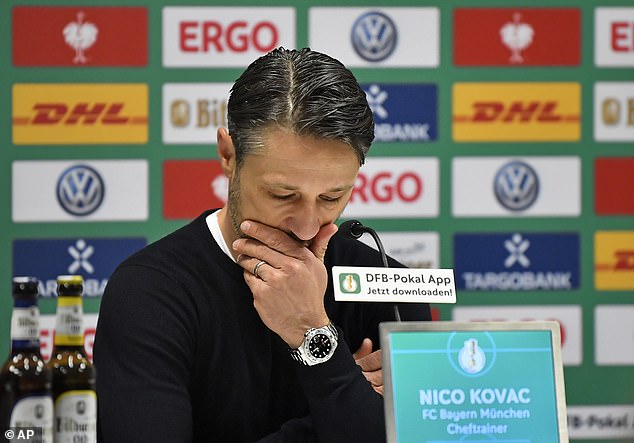 ‘I do not see anyone taking charge there,’ he told Sky in Germany. ‘Kovac failed to build a hierarchy at the beginning of the season and the whole thing is not right.

‘Niko has to see that he gets this team behind him again. They are different players than the ones he has trained before.’

Things came to a head on Saturday when Thomas Muller was dropped from the side, a decision which caused outrage among some sections of the support – not least from Muller’s wife Lisa.

‘This statement by Lisa Mueller – that sums up the mood,’ Matthaeus continued.

‘These are the conversations going on at home, that not all players are behind Niko Kovac. There’s a dissatisfaction there.’

Despite a relatively poor four months in charge for Kovac, Bayern can qualify for the knockout stages of the Champions League as early as Wednesday night.

If the Bavarians beat AEK Athens at home and Benfica lose at Ajax, they will have already secured their spot in the last 16.