Home » Mauricio Pochettino: How has the Argentine's PSG reign begun?

Mauricio Pochettino may have only taken charge at Paris Saint-German in January, but the Champions League quarter-final with Bayern Munich already seems like a pivotal contest for the Argentine – so how has the former Tottenham boss fared so far at the Parc des Princes?

In many ways, Pochettino seemed the obvious candidate to replace Thomas Tuchel when the German was sacked by PSG with the Ligue 1 champions sitting third in the table just before Christmas.

Not only was the 49-year-old available having left Spurs in November 2019, but he was also a popular former player in the French capital, having represented the club between 2001 and 2003.

That popularity only increased when Pochettino almost immediately led PSG to a 2-1 victory over fierce rivals Marseille in the delayed 2020 Trophee des Champions – the French equivalent of the FA Community Shield – the first trophy of his 12-year managerial career.

Meanwhile, in February Pochettino masterminded one of PSG’s most memorable European displays, a stunning 4-1 win at Barcelona that helped set up Wednesday night’s Champions League last-eight showdown with Bayern again, the team that pipped Tuchel’s side to the trophy in August.

However, it has not all been plain sailing so far for the new man in Paris, with Pochettino having already overseen four defeats in his first 14 games at the helm, while Saturday’s 1-0 loss to leaders Lille was unthinkably PSG’s third in a row at home.

And as French football writer Tom Williams explains, the new manager is still to really make an impact on the side.

“His record so far has been a mixture of the very good (the first-leg win over Barcelona, an excellent 4-2 defeat of Lyon prior to the international break) and the very bad (a 3-2 loss at struggling Lorient and home defeats against Monaco, Nantes and Lille),” Williams says. “The Champions League success against Barca – and particularly the manner of the first-leg victory at Camp Nou – earned him a lot of credit, but it doesn’t feel like he’s really made his mark on the team yet.

“PSG still look like a collection of talented individuals, rather than a proper team, and that was precisely their problem under Tuchel.”

As most new managers tend to do, Pochettino has made some tactical tweaks, ditching the 5-3-2 setup that Tuchel had settled on by the end of his tenure for a trademark 4-2-3-1 system, while there have also been some line-up changes. 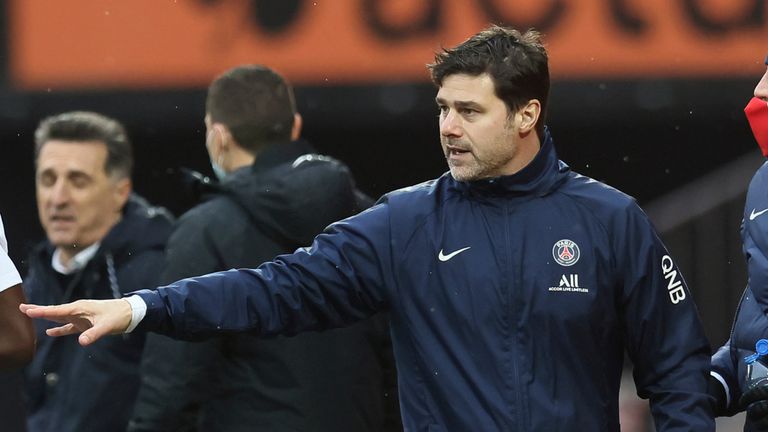 “Pochettino has credit in the bank because of his prior associations with the club and the fact he only arrived in mid-season, but if he misses out on the title, it will only serve to fuel accusations that he has some kind of blind spot when it comes to leading teams to trophies.”

This being PSG, though, not even getting his hands on the big one will guarantee his survival in the job.

“Of course, if PSG end up winning the Champions League this season, all would be forgiven. But Tuchel was sacked just four months after leading PSG to their first-ever Champions League final, which shows that, where the club’s owners are concerned, even continental achievements are no guarantee of immunity.” Recent reports in France claimed Neymar has reached a pre-contract agreement with PSG until 2026, with the club now focused on securing a similar deal with Mbappe.

However, as Williams explains, while the Brazil forward looks set to stay at the Parc des Princes, his strike partner’s long-term future appears less secure.

“It seems likely that Neymar is going to commit his future to PSG in the near future,” he said. “Mbappe’s situation looks a little less clear cut.

“The France international admitted in January that he was “reflecting” on his future and with his contract due to expire in 2022, PSG may face a choice between losing him for free next year or cashing in – as best they can, in the current financial climate – this summer.”