When tragedy struck the Denmark camp on June 12 during their Euro 2020 opener against Finland, the squad stood tall and vowed to continue in Christian Eriksen’s absence. The midfielder suffered a cardiac arrest after collapsing when in possession and was rescusciated on the pitch before being taken to hospital. He was later released and is recovering at home.

With the image of Eriksen’s collapse still lodged in their minds, his close friends and team-mates rose to the occasion and showed their character.

They might have lost 1-0 against Finland several hours later, but the result paled in comparison to everything else that had happened that day.

Still, Denmark were in the tournament and wanted to keep it that way. Replacing Eriksen would be a very difficult challenge, but it is one Mikkel Damsgaard was ready for.

The 20-year-old was brought to the tournament as an understudy to the experienced playmaker. There was no doubting his talents — he scored twice on his debut against Moldova in March — but his raw age and lack of experience meant he was likely to be an impact substitute at best.

JUST IN: Grealish has ‘scary’ warning for England rivals ahead of Ukraine clash 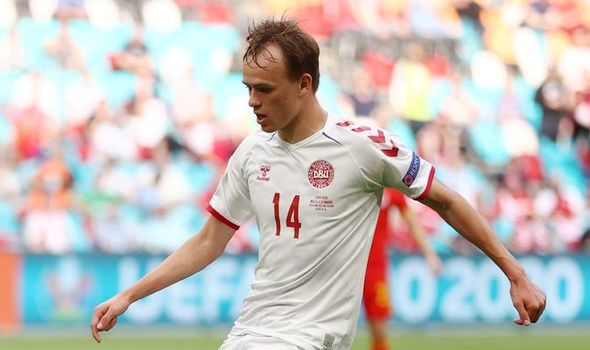 But the situation required him to be drafted into the team and Kasper Hjulmand had no hesitation in doing so after his impressive debut campaign at Sampdoria.

“Mikkel is one step ahead, just one or two seconds quicker in his head [than other players],” says Hjulmand. “He makes it looks as if he has just a little more time than others, and he has always been that way.

Handed the opportunity to impress, Damsgaard did not disappoint.

On his first start against Russia in the second group match, he picked up the ball in a central area on the edge of the 18-yard box.

If Eriksen was watching the game at home, he would have been proud as Damsgaard took a touch out of his feet, set himself and curled a stunning effort into the top corner.

It sent the Denmark fans into pandemonium in Copenhagen and that goal gave the Danes a platform to work from as they went on to seal a 4-1 win over Russia.

That victory put his nation through to the last-16 and Damsgaard was rewarded with another start against Wales. Once again, he would have his say in Denmark’s opening goal.

It was a superb move from the off, with Joakhim Maehle picking out Kasper Dolberg with a fine through ball.

The striker laid it off to Damsgaard, who cleverly drew out two defenders and handed it back to him, and Dolberg did the rest, firing a sublime effort into the bottom corner.

The football world started to take notice of this attacking midfielder who was delivering on the big stage despite his tender age. But those who watched Serie A this season would have been aware of his talents. 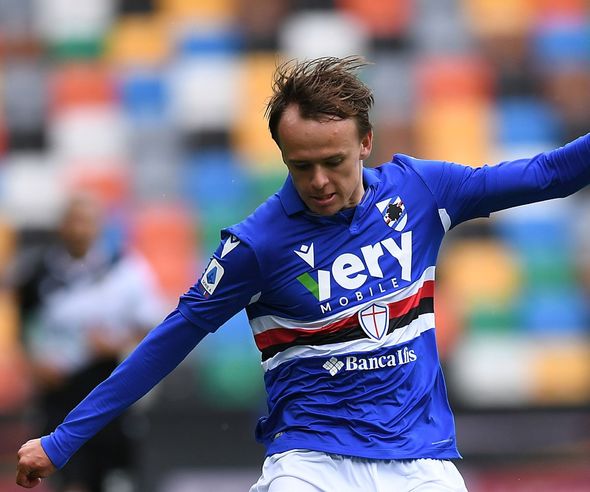 Under the nurturing guidance of Claudio Ranieri, Damsgaard has shone for the Italian outfit since arriving for £5.8million from FC Nordsjaelland.

It was in the Superliga where he caught the eye of several European clubs with 11 goals in 35 games in 2019-20, including Premier League clubs.

But it was Sampdoria who clinched his signature and they have benefited from his presence in the side, with Damsgaard registering two goals and four assists. Hardly earth-shattering, but a decent start nonetheless.

The fact he can operate as a No.10 or from the left flank makes him a versatile player and an attractive proposition for managers who play with a 4-2-3-1.

Ranieri has recognised his ability but the Italian has been wary of putting him too much in the spotlight.

“There is no question he is a prodigy, but let’s not put too much pressure on him,” he said.

After just one season in Italy and a few fine displays at the European Championship, there is talk of a £45m price tag for Damsgaard amid reported interest from Tottenham and AC Milan.

According to Tuttosport via MilanNews.it, Milan are prepared to offer a sizeable fee and Andrea Conti in order to push through a deal, as they cannot meet Sampdoria’s asking price.

That could bring Spurs into the equation. The club’s new sporting director, Fabio Paratici, is thought to have recommended signing the playmaker after monitoring his performances in Serie A last season. 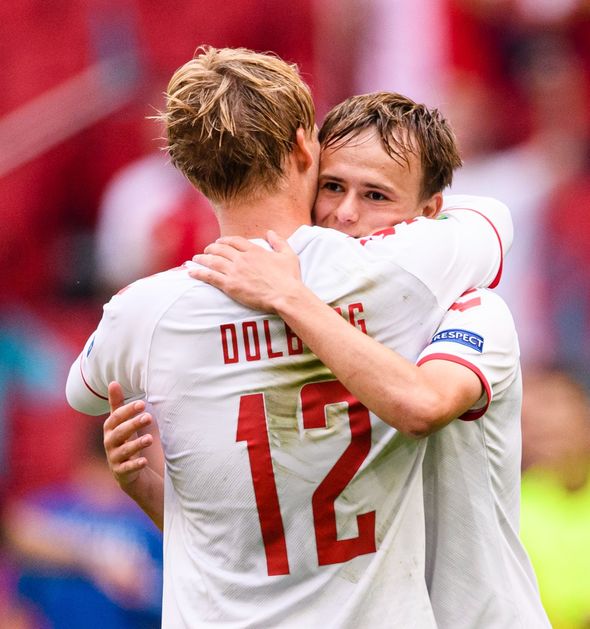 Tottenham have lacked a traditional playmaker since Eriksen left for Inter Milan in January 2020, with Erik Lamela and Giovani Lo Celso struggling to make a consistent impact.

There is also reported interest from Liverpool after allowing Georginio Wijnaldum to depart on a free transfer.

Jurgen Klopp determined to strengthen his options in attacking areas after seeing his frontline disappoint in front of goal last season and Damsgaard is reportedly on his shortlist of targets.

Damsgaard now faces the pressure of performing with the stage light shining above him as he prepares to celebrate his 21st birthday when Denmark take on Czech Republic in their quarter-final clash on Saturday.

Barring a late injury problem, he looks set to one of the key men on display again. And if he performs, you can expect the Premier League’s best to battle for his signature — taking him down Eriksen’s path once again, only this time to England.