Mesut Ozil claims Arsene Wenger is still missed by “many people” at Arsenal amid speculation over the future of current manager Mikel Arteta. Wenger left Arsenal at the end of the 2017/18 season and was replaced by Unai Emery. It brought to an end a near 22-year tenure for the Frenchman in north London.

Wenger brought Ozil to Arsenal from Real Madrid in 2013 for a then club-record transfer fee of £42.5million.

The German midfielder, who is currently out of favour under Arteta, has always spoken well of his former boss.

And in a Twitter question and answer session, Ozil has once again given his views on Wenger, as well as those still at the club.

Ozil tweeted: “He was really a fantastic manager – yeah, and also like a father figure for me and many other players… I think many people around Arsenal are really missing him. #AskMesut.” 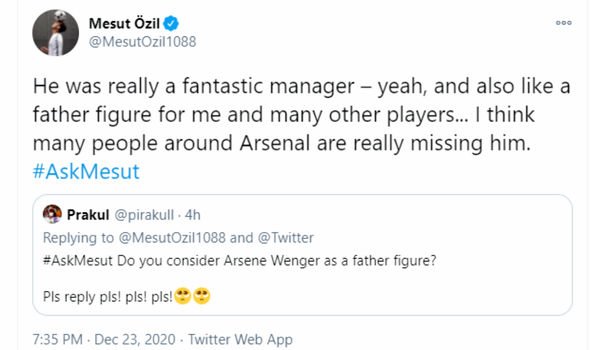 Arsenal have had their worst start to a season since 1974, having won just one of their last 10 Premier League matches.

The Gunners sit 15th in the table, which has led to claims Arteta should lose his job.

Ozil has not featured this season after being left out of both the Premier League and Europa League squads.

But he still hopes the team can turn results around soon. 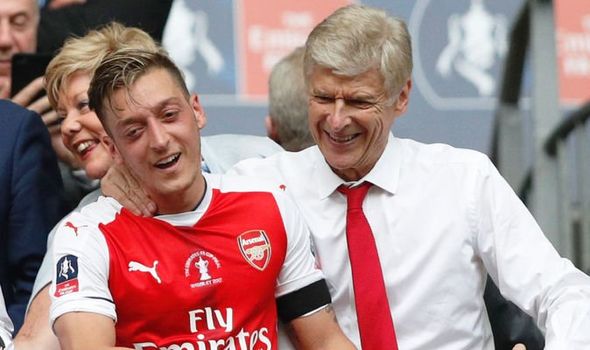 He tweeted: “It’s a very difficult time for everyone around the club – not just for me. The situation is frustrating for everyone.

“Of course I would wish I could help the team especially right now, but as long as I don’t get the chance I just hope that we get better results very soon again. But let’s stay positive.”

Wenger insisted he did not have any problems with the playmaker during his time in charge.

“He was not difficult to manage,” Wenger told ESPN.

“He was a guy who had a special quality as a creative player and needed to have fun. He is an artist and these guys are a bit more sensitive.

“They need support and an environment that pushes them to give their best.”

Ozil has made 254 appearances for Arsenal in all competitions, scoring 44 goals.