The Ange Postecoglou era is officially under way at Celtic after the Scottish giants drew 1-1 in a UEFA Champions League qualifier against Danish side FC Midtjylland in Glasgow.

With 9000 fans in the stands at Celtic Park due to COVID-19 restrictions, the battle between Socceroos Tom Rogic (Celtic) and Awer Mabil (Midtjylland) ended with both sides reduced to 10 men. The Australians both joined the fray as second-half substitutes.

Postecoglou lined up with the 4-3-3 formation which brought career-building success during his time at Brisbane Roar rather than the 4-2-3-1 set-up often used during his fruitful stint in Japan with Yokohama F. Marinos.

Celtic’s forward line of Ryan Christie, Odsonne Edouard and new signing Liel Abada had the majority of first-half chances en route to 63 per cent possession for the match. They were rewarded when Abada was fastest to a loose ball following a strike from Christie in the 39th minute.

Celtic lost Nir Bitton for a second bookable offence just minutes from the half-time break when the Israeli took exception to what he saw as a dive from Anders Dreyer and appeared to poke the Dane in the face.

The disadvantage, however, was not to last long. Midtjylland winger Dreyer himself saw red in the 56th minute, his second yellow card coming for simulation and seen by plenty of home fans as justice for his involvement in Bitton’s dismissal. 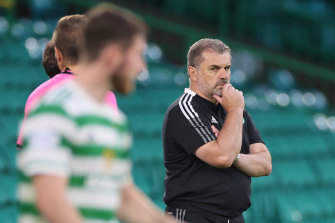 Ange Postecoglou on the sidelines at Celtic Park.Credit:Getty

“We deserved the win,” Postecoglou said.

“We played really well, especially first half where we controlled the game, scored a good goal and hit the post.

“We went down to 10 men for a significant amount of time and had to work hard. We created some good chances again and limited them to two strikes the whole game.’ 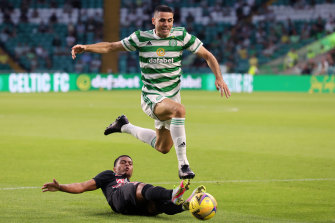 Postecoglou brought on Socceroo Tom Rogic with 12 minutes to play in Glasgow.Credit:Getty

“It was a little bit of a missed opportunity but at the same time a fantastic effort by the players.”

Celtic face West Ham in their final warm-up match on Sunday having beaten Sheffield Wednesday and Charlton before a scoreless draw with Bristol City and 1-0 loss to Preston in pre-season under Postecoglou’s tutelage.

Never miss a medal or great sporting moment with our Olympic update emailed daily. Sign up for our Sport newsletter here.