It’s the amazing pogoing striker! Wales No 9 Kieffer Moore pulled off an unusual trick against Italy after being told to jump WITHOUT using his arms to avoid getting a booking… now he wants to surprise the Danes

As if Kieffer Moore has not faced enough challenges in football — his profession dumped him in the non-League just four years ago — he found himself being asked to pogo jump of all things during Wales’ broiling night in Rome last weekend.

The team had started the game against Italy without him because he was on a yellow card and thoughts had already turned to Wales’ round of 16 game against Denmark on Saturday.

But with the side under Italian siege and showing no way of breaking out, he was sent on for the last half hour as a targetman — under strict instruction from almost everyone in a Wales kit to ‘keep your arms down’ and avoid a booking that would have brought a one-game suspension. 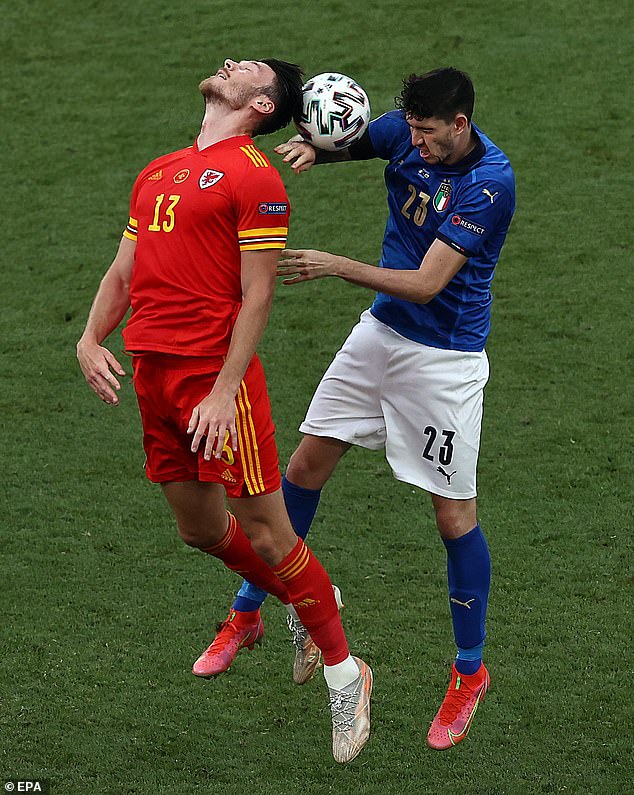 It wasn’t just interim manager Rob Page issuing this diktat. Gareth Bale had the same instructions when Moore ran on to the Stadio Olimpico pitch. Easier said than done, because jumping with your arms by your sides is not that straightforward, Moore relates.

‘But you know, there was a good cause to it — not getting a yellow card. Thankfully that didn’t happen. So I could be a part of this game.’

A half hour of pogoing, then? 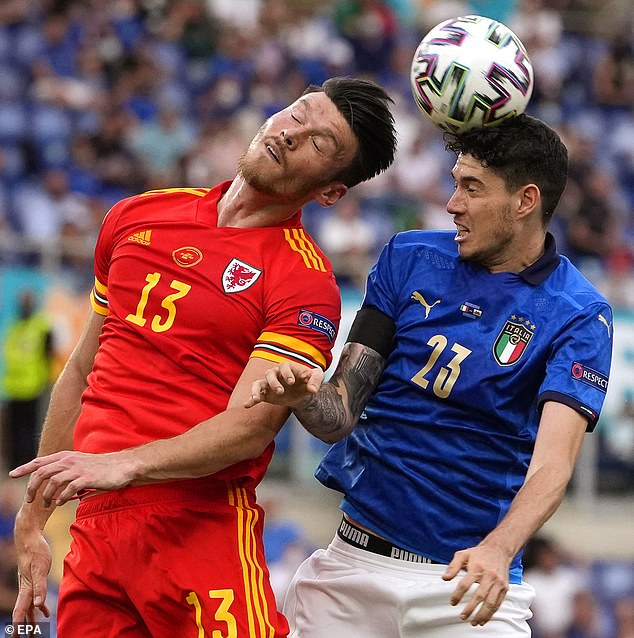 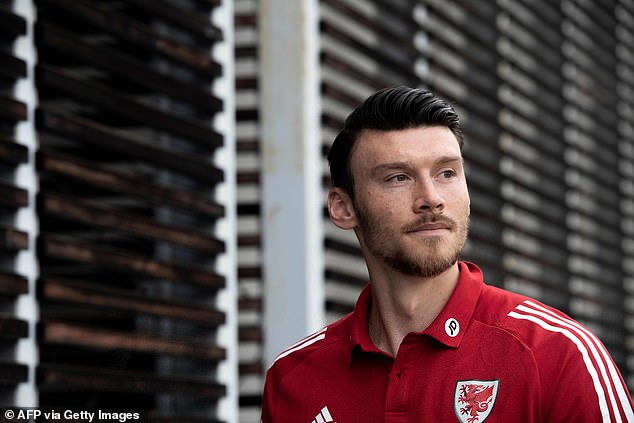 ‘You could say that! Yeah,’ he says, offering one of the few laughs that punctuates the conversation with a player who clearly takes his part in the tournament very seriously. He says that his task in Rome was probably the toughest challenge he’s faced since Page made Moore central to the Welsh system in the opening match against Switzerland.

‘It’s not an easy task, when a huge proportion of your game is winning those headers and bringing others into play,’ he says. ‘And so to do that, in a restricted manner, was fairly difficult. But I think the game’s about adapting.’

The Cardiff City striker has become accustomed to doing that. The better known part of his story is how he played part-time at Truro, supplementing his income with work as a lifeguard. But there was nothing idyllic about the way he was deemed surplus to requirement by Forest Green, who sent him on unsuccessful trials at Exeter and Leyton Orient before he started to find his way at his home town club, Torquay.

He’s a metaphor for this Wales team in so many ways. One of the band of brothers who have either been written off or are operating beneath the club football elite, yet have formed an immense collective because of it. Half of the Welsh squad — 13 players — ply their trade outside the top flight, the same number as the whole of the other last 16 nations combined.

Finding words for how it feels to have gone from the Forest Green years to an Amsterdam knockout in the space of five years would test the best of talkers.

‘I don’t think I can,’ Moore says. ‘It’s part of my journey and I’ve loved every minute of it. It’s not been easy, but through hard work and resilience I’ve made it — I want to keep going.’ 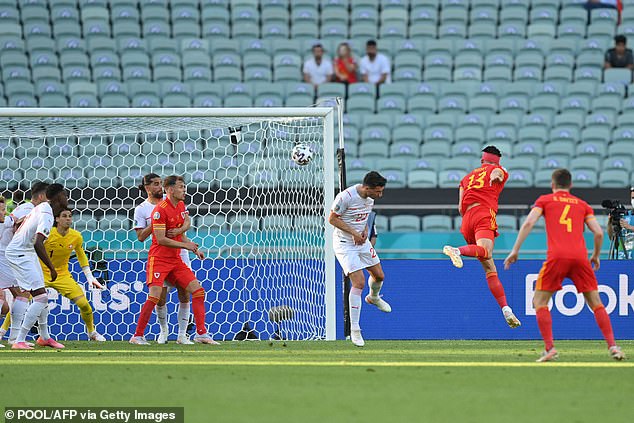 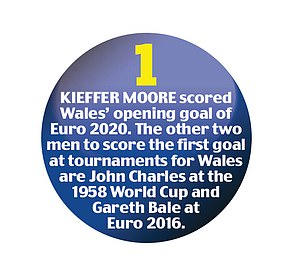 What impresses many in Welsh football circles is the workload Moore puts in defensively. He is fundamental to the team’s defence of corners. But in Rome, the Italian centre halves were so busy tracking him that Ben Davies was left free to leap for the knock-down which presented Bale with the match’s outstanding chance.

He’s 6ft 4in and feels that tall players like himself don’t get a fair ride from referees. He was deemed to have committed 80 fouls last season — the sixth highest in the Championship.

‘As a striker, I’d say yes but I’ll leave it at that,’ he says. ‘It’s about finding ways around your style of play that suit different international standards.’

Tomorrow brings him up against central defenders who have captured the heart of the Danish nation as the team have progressed in the shadow of Christian Eriksen’s collapse two weeks ago. Andreas Christensen and captain Simon Kjaer, as well as Southampton’s Jannik Vestergaard, will present a serious challenge. 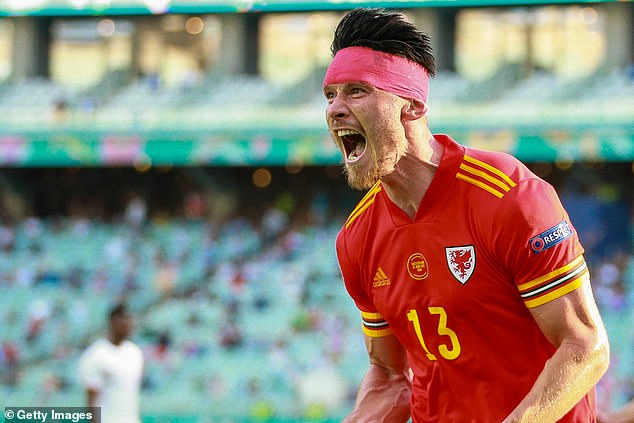 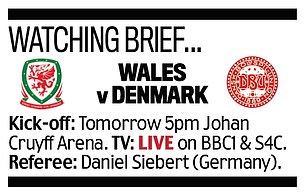 And then there will be the partisan following for the Danish side from a 16,000-strong crowd at the Johan Cruyff Arena. If there is a temptation to develop a siege mentality, Wales must resist it, Moore believes.

‘We shouldn’t let that affect us in that way,’ he reflects. ‘Obviously, it’s devastating (what happened to Eriksen) but if we let that hamper us, it could put us off our game. Don’t get me wrong — as a nation we are fully behind him, but that won’t take anything away from our performance.’

He is reluctant to dwell on what a struggle it’s been to get here. A story for another day, perhaps.

‘It’s been a whirlwind tournament so far,’ Moore adds. ‘But we’re going into this game to win.’