Newcastle vs Arsenal LIVE: Gunners bid to return to winning ways against Steve Bruce’s side, who can take a giant step to safety with three points

After a frustrating Europa League semi-final defeat by Villarreal in midweek, Mikel Arteta’s men are in Newcastle to take on Steve Bruce’s Magpies.

Three points for Newcastle would be a giant step towards sealing Premier League safety while for Arsenal, a win would provide a much-needed confidence boost ahead of the return leg against the Spanish side.

Among the many changes for Arsenal you might notice is Aubameyang’s first Premier League start for the Gunners since their woeful 3-0 defeat to Liverpool on April 3.

The last time the Gunners played Newcastle, the striker scored twice in a 3-0 victory at the Emirates.

That also came a week after he scored against the Magpies in a 2-0 win in the FA Cup 3rd round.

Arsenal will be hoping he can regain his form and score against Newcastle once again this afternoon. 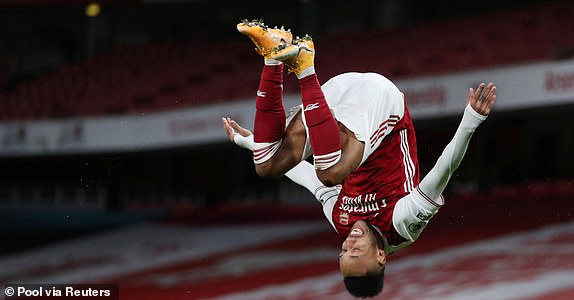 Newcastle might be in the better form going into the game with just one defeat in their last eight league games, but Arsenal are Betfair’s picks to win today.

A repeat of the 4-4 thriller from ten years ago when Newcastle came from four goals behind to seal a point is 200/1.

We’d take a game as enjoyable as that one today!

Arsenal meanwhile make a whole host of changes that fell to a 2-1 defeat to Villarreal in the Europa League.

Newcastle make one change from the side that held Liverpool to a 1-1 draw through Joe Willock’s late equaliser. Joelinton drops to the bench while Callum Wilson starts.

Good afternoon everybody and welcome to Sportsmail’s live coverage of the Premier League clash between Newcastle and Arsenal.

Newcastle are unbeaten in their last four games and now have a healthy gap over 18th placed Fulham in the table. A win today would see them move 12 points above the relegation zone with four further games after today to play.

For Arsenal they will be looking for a much-needed confidence boost ahead of their second-leg against Villarreal. They will climb into the top-ten above Aston Villa and Leeds with a victory.

Team news with you shortly…