Milos Ninkovic could see it in pre-season. Luke Brattan saw it in Qatar. They both agree: the hype around Sydney FC teenager Calem Nieuwenhof is real and justified.

The emerging theme of the new A-League season is young talent seizing opportunity. Nieuwenhof has set the example, scoring an incredible long-distance goal on his domestic debut after four faultless outings against Asia's best in the AFC Champions League. 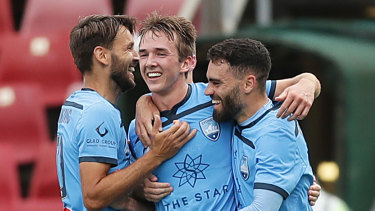 If Nieuwenhof has been nervous so far, he hasn’t played like it. Derbies are naturally different, but his teammates are rallying around him to ensure he is prepared for another likely start in the centre of midfield at Stadium Australia, where a crowd of more than 15,000 is expected.

"I think he will be better every game, because he'll get more confidence," Ninkovic said.

"I've spoken to him a couple of times … I just said to him to play every game like he's at training. If he's relaxed he can play well. If he's not relaxed he can't show the potential he has. He's relaxed anyway, on and off the field.

"I said before the season that he can be one of the guys who can most surprise everyone. Obviously he's very talented – if you watched the Champions League games he was amazing.

"I'm so happy for him, he's a really nice guy and very talented, and if he keeps playing and working this way he will have a very big career."

Brattan, who played alongside Nieuwenhof in Sydney's 2-1 win over Wellington Phoenix almost a fortnight ago, also believes he has all the right attributes to succeed as a footballer.

"He's done well," Brattan said. "He's good to play with. He's still got a lot to learn, but that will come with game time and experience, and soaking up the knowledge with the boys around him.

"He is very chilled and because he's good on the ball, he maybe slows things down a little bit sometimes. There's not just one thing, there's a lot of things you need to work on as a kid. Communication's a big one – the more you talk the easier the game is.

"He's got the right people around him to help him out. He deserves the buzz that he's getting, but at the same time, we can't get too carried away. The derby will be a good test for him, if he plays, and hopefully he does well again and keeps his spot because he's a great talent."

In a broader context, this is a pivotal game for Sydney FC. Last season, they failed to beat the Wanderers in three attempts, despite clearly being the best team on the park for two of them – and Ninkovic insists they have a score to settle.

"Especially the first one, when they beat us 1-0, we played probably one of the best games last season, and we lost," he said.

"When you lose derbies, it's always hard. When you win derbies, it's the best feeling ever because the next day, everyone is happy, the atmosphere is very good in the team.

"If you play well and don't win, no one cares. Three points is the most important thing for us."