Bukayo Saka and Eddie Nketiah combined to down Man United, Erling Haaland is back with a bang after a ruthless hat-trick for Man City and Kieran Trippier’s clean sheet run continued… but who tops this week’s POWER RANKINGS?

The latest round of Premier League games saw plenty of drama and controversy, with Arsenal scoring a 90th-minute winner to down Manchester United 3-2 in a thriller at the Emirates. 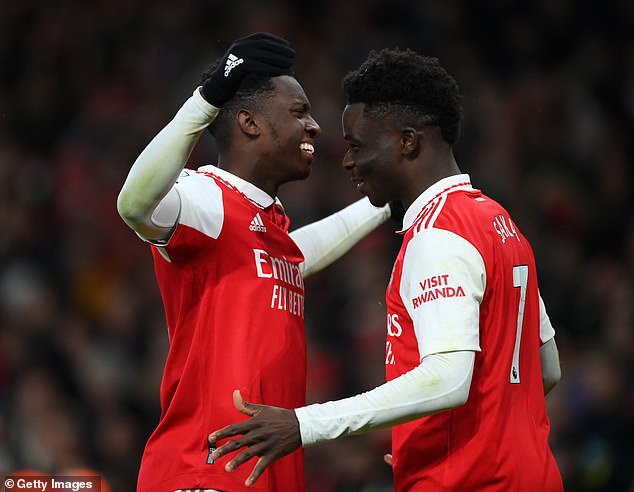 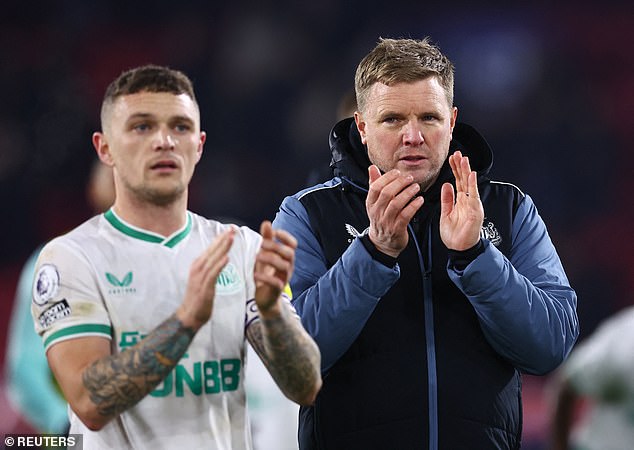 The clean sheets continued for Newcastle and Kieran Trippier after a stalemate with Crystal Palace, while Liverpool and Chelsea, Leeds and Brentford also played out goalless draws.

With all that in mind, here’s the latest top 10 of Sportsmail‘s Premier League Power Rankings.

Brentford will consider themselves a little fortunate to have left Elland Road with a draw.

Jesse Marsch’s side enjoyed 59 per cent possession, nine shots to Brentford’s six and five on target to a big fat zilch from the Bees.

The trouble is, goalkeeper David Raya was in the way of all of them. The Spanish stopper tops the league for saves (86), ball recoveries (212) and accurate long balls (216), as well as ranking highly for clean sheets and man-of-the-match awards.

Thomas Frank’s side are currently one point off sixth – and at the weekend, they had Raya to thank for that. 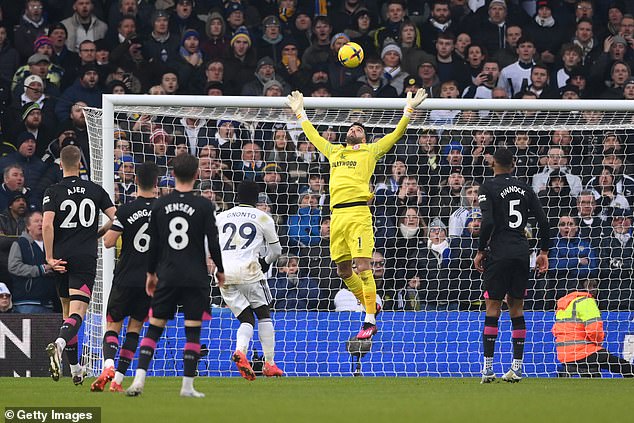 It’s fair to say there might not have been that much hype around Brighton signing Kaoru Mitoma from Kawasaki Frontale back in August 2021, especially considering the Japanese winger went straight to Belgian side Union Saint-Gilloise on loan.

But the 25-year-old was integrated into the Seagulls first team this season, and after a quiet start – often used as an impact substitute and occasionally played at left wing-back – he had a solitary assist after the first 13 league games of the season.

The following eight have seen four goals and two assists, with plenty of exciting dribbles getting fans of the south-coast club off their feet. His latest strike was an absolute pearler, too.

He picked up the ball from Pervis Estupinan maybe 35 yards out and not far from the touchline. After breezing past full-back Timothy Castagne, he casually rifled a wickedly dipping strike into the top corner. He’s got the hype now. 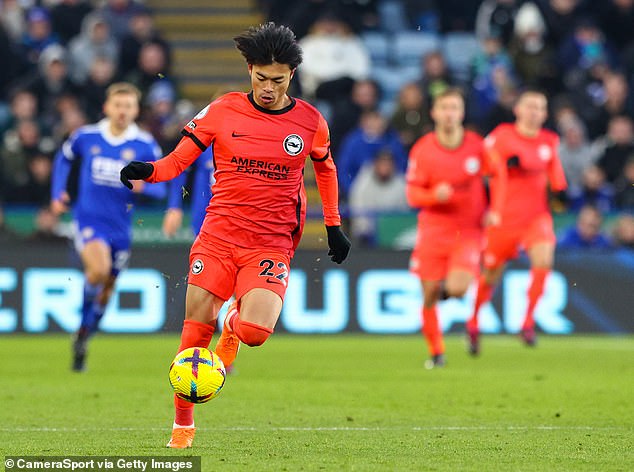 This season has been a real struggle for West Ham, with David Moyes’ men – like Liverpool – struggling to cope after the superhuman exertions of last season, and the emotional rollercoaster of the Hammers’ run to the Europa League semi-finals.

A hugely impressive 29 Premier League goal involvements rocketed winger Jarrod Bowen into the England squad, but the goals have dried up for player and club this campaign, with only Nottingham Forest, Wolves and Everton scoring fewer.

Saturday’s clash with the Toffees was dubbed ‘El Sack-ico’, the implication being whichever manager lost the game would lose their job too. Bowen came up trumps when his team needed him with two poacher’s finishes, and Everton’s Frank Lampard subsequently got the axe.

That match doubled Bowen’s goals tally for the season. He and Moyes will hope there are more to come. 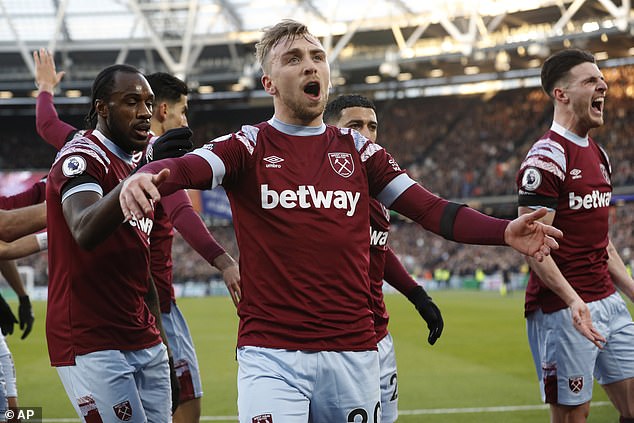 At Jimmy Greaves’ funeral, long-time friend and author Norman Giller called him ‘a (Lionel) Messi with bells on’.

After Harry Kane equalled Greaves’ all-time Tottenham goalscoring record with his 266th against Fulham, what does that make him?

It seems strange to say but Kane seems oddly unloved by neutral fans and pundits despite being perhaps the best out-and-out goalscorer of his generation, along with Robert Lewandowski and Karim Benzema.

His goal against Fulham was quintessential Harry: touch, set, finish – easy as one, two, three. The idea of a future without Kane is enough to have Spurs fans quaking in their boots. 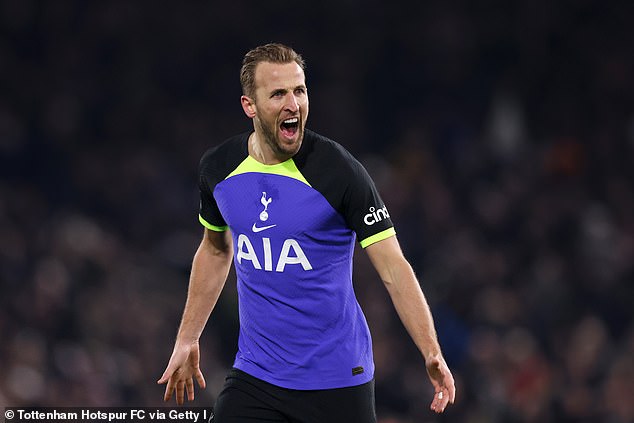 Newcastle have conceded just three goals in their last 15 league games. Three. In their last 1350 minutes, not including added time or stoppage time.

Many assumed the first and flagship signing under the hugely controversial Saudi Arabian owners, whose wealth makes them the richest club in the world, would be a big-money buy, perhaps a world-class striker or exciting midfielder.

Instead they turned to a 31-year-old (now 32) right back born in Bury for an initial £12million. And it proved a masterstroke.

Kieran Trippier’s leadership, high standards and drive make him a model professional and his performances have been world-class.

On the pitch, aside from being a set-piece threat, he caused Crystal Palace all kinds of problems on Saturday, creating many of his side’s chances and helping preserve yet another clean sheet up against the tricky Wilfried Zaha. 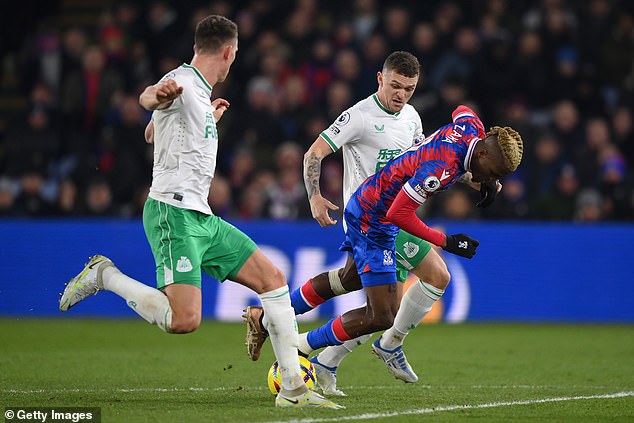 Rashford’s goal against Arsenal was an individual piece of brilliance. Intercepting Thomas Partey’s slack pass, he slipped past the Ghanaian again with a clever flick.

Three touches and three seconds later he had arrowed it past the helpless Aaron Ramsdale.

The England forward is arguably in the best form of his career, with five goals in his last six, and although the Gunners shackled him better in the second half, the fact they had to change their plan to restrict him proves his importance.

Last summer, Eddie Nketiah’s contract was up. Once again, it had been a season of rotation and bench-warming, late cameos and cup appearances. It yielded five league goals, double that in all competitions.

For much of the campaign he was third choice, behind Pierre-Emerick Aubameyang and Alexandre Lacazette, in a one-striker system. Expectations from where he would end up ranged from Crystal Palace to West Ham and much further afield.

But, after sufficiently impressing boss Mikel Arteta, he signed a new and improved five-year contract at the Emirates. In November, £45m summer signing Gabriel Jesus got injured, and since then, he’s played 450 minutes out of a possible 450.

That stint has yielded as his side took 13 points from a possible 15 from a run including Brighton, Newcastle, rivals Tottenham and Manchester United. His double against United showed he can step in for Jesus – and could help fire them to the title. 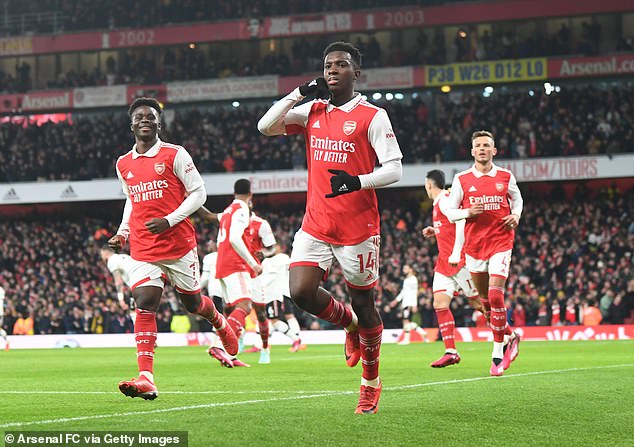 Martin Odegaard was, once again, utterly central to Arsenal as they sneaked past Erik ten Hag’s side on Sunday.

His inch-perfect pass to Granit Xhaka to set up Nketiah’s equaliser. His shot from which Nketiah scored the winner. And if you look at almost anything Arsenal created or did well, Odegaard had a hand in it.

The Emirates (plus the away grounds) is his canvas, and at the moment Gunners supporters are just enjoying witnessing his glorious brushstrokes. And he is the favourite to lift the Premier League trophy at the end of the season.

Haaland’s goals against Wolves may not have been the most spectacular or aesthetically pleasing. A close-range header from a beautifully measured Kevin De Bruyne cross, a penalty and a tap-in into an open goal. 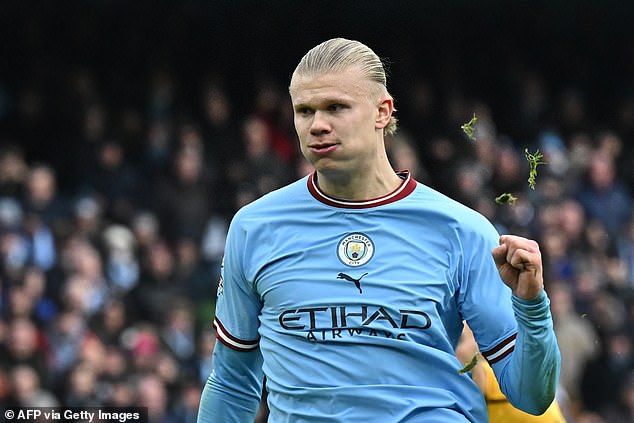 But look back at the catalogues of Messi and Cristiano Ronaldo, Kane and Lewandowski – they’re not all 40-yard screamers or flying overhead-kick volleys.

Haaland has 31 goals in 26 games this season. He could well reach 50. And he may well also become one of the best goalscorers the game has ever seen.

What more can you say about Bukayo Saka? The beaming assassin, who shreds your defence to ribbons without ever losing his kilowatt smile.

He turned one of the best and most in-form full-backs in the country, Luke Shaw, into mincemeat over and over again and he’s currently the sharpest rapier in the Gunners’ attack.

What a joy it is to watch him. And what a ball he seems to be having as he carries Arsenal towards the title.