Manchester United manager Ole Gunnar Solskjaer says he never liked the European Super League concept and is glad supporters showed their anger which led to its collapse, but insists he continues to have a good working relationship with the Glazer family.

United were among 12 founding clubs confirmed as part of the breakaway competition late on Sunday evening, but those plans swiftly unravelled.

United co-chairman Joel Glazer, who was announced as Super League vice-chairman, admitted they “got it wrong” after withdrawing from the competition on Tuesday evening.

Solskjaer, speaking for the first time since the apology, said he was never on board with the concept: “I’m very happy that the fans have voiced their opinion and that we’ve listened to them.

“In a strange sort of way it’s brought the football pyramid or community together and I think that’s important and I’m very happy.

“I’m a supporter myself, and there’ll be a day that I’ll come back and watch Man United and I want to watch a team even with a fear of failure.

“That’s what I thought about it. I didn’t like the concept anyway because it has to be on sporting merit. I want to earn the right to play in Europe.”

The United boss added: “I’m very happy that all the clubs that have admitted their mistake, that this was a bad idea and the way that it came out as well.”

Solskjaer was keen to move onto Sunday’s match against Leeds, live on Sky Sports, after an initial lengthy answer on the Super League but he continued to be pressed on the fall-out from the failed breakaway.

When asked if he believed the Glazers were the right custodians to take the club forward, he replied: “You know what I’ve said about the Super League and I’m so happy that all the owners, all the clubs involved agreed that this was a mistake.

“I’ve always had a good working relationship with the club and the owners.

“Of course behind the walls of the building we speak, they listened to my opinions and we’re working to move Man United forward, of course.”

United’s executive vice-chairman Ed Woodward was involved in plans for the Super League “from day one”, according to a Premier League club chief executive. 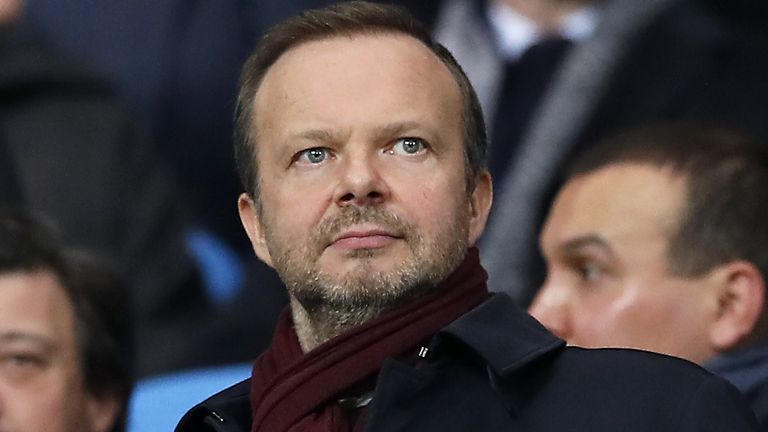 Woodward resigned on Tuesday just hours before the Super League project was abandoned by the six Premier League clubs involved.

Sky Sports News understands Woodward, who is set to leave at the end of this year, made the decision because he could not support the owners’ plans to join the Super League.

Asked if he had also considered his future, Solskjaer said: “Football is emotions and emotions run high in football.

“I’ve had a very, very good working relationship with Ed. The club will have to move on without him and I’m sure Man United will always move on.

“I’ll work as long as Man United want me to work here and hopefully we can end this season successfully and Ed is part of that.”

Join us at 5pm this evening for a two-and-half-hour Sky Sports News special show looking into how the breakaway Super League rocked football to its very core and asks what now for Britain’s national game.

The show will include new interviews with Pep Guardiola, Gary Neville and Nemanja Matic and we will be joined by John Barnes, Alan Smith, Raphael Hongistein and others to cover one of the biggest stories in British Sport for decades.