Home » Soccer » OLIVER HOLT: Man City fans can boo, but they know how lucky they are

OLIVER HOLT: Man City fans can boo if they want to… after standing by their side through the bad times, they know how lucky they are to have Pep Guardiola and this team

It was quiet at Old Trafford on New Year’s Day 2008 when Manchester United played Birmingham City. United were reigning champions, they would retain the title that season and they would win it the season after, too. They were in the midst of a period of almost unparalleled success. And yet the atmosphere inside the stadium that afternoon was subdued.

Maybe some of the supporters had over-indulged the night before. Maybe they were sated with success. Maybe it was just that the 1-0 victory over Birmingham, who were engaged in a relegation struggle, was not particularly exciting. But the mood among the supporters was soporific to the point where the United manager, Sir Alex Ferguson, felt compelled to complain about it in a post-match interview.

‘That was the quietest I’ve heard our crowd,’ Ferguson told MUTV. ‘We need the supporters to create a good atmosphere here because the players respond to that. At times it was like a funeral. We need the fans to get behind us.’ The comments stung but many accepted them. Eight years before that, Roy Keane had observed the changing face of football spectating when he identified the ‘prawn sandwich’ brigade who populated executive boxes. 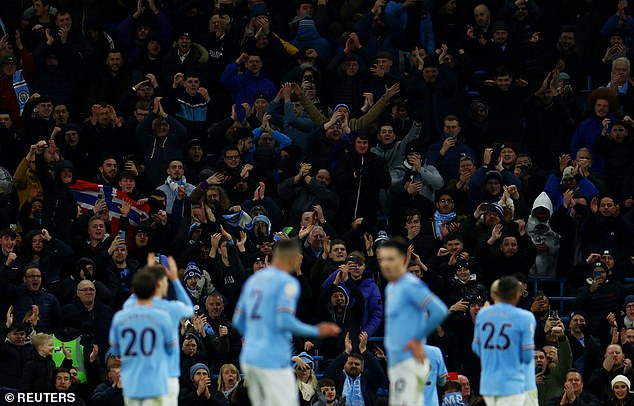 Supporters of other sides seized gleefully on Ferguson’s comments. United were sweeping all before them so opponents were grateful for any glint of an opportunity to score points off the pitch. Visiting supporters often reference Ferguson’s comments even now on trips to Old Trafford. ‘Fergie’s right, your fans are sh**e,’ can be heard regularly coming from the away section in one corner of the ground.

On Thursday night, history repeated itself. Except this time, it was on the other side of Manchester, where City were playing Spurs. City, who have won the Premier League title four times in the past five years and lie second in the table, conceded two goals to Antonio Conte’s side just before half-time and were booed off the pitch by their fans as they trudged back towards the tunnel.

City mounted a brilliant second-half comeback and won the game 4-2. After the match, Guardiola accused his team of lacking the fire that league leaders Arsenal have and said his players and City’s home fans had become too comfortable. ‘I want my fans back,’ said Guardiola. ‘I want my fans in here. Not my away fans. My away fans is the best. My fans here, the real ones, to support every corner and every action, support it, because we play.’

By then, City fans were already being mocked on social media and elsewhere for their sense of entitlement. How dare they boo a side that has provided them with triumph after triumph these past five seasons or more. How dare they have the temerity to jeer their team off at the interval.

How ungrateful, how fickle, can you get. ‘Guardiola’s right, the fans are sh**e’ chants will be coming soon to the Etihad. 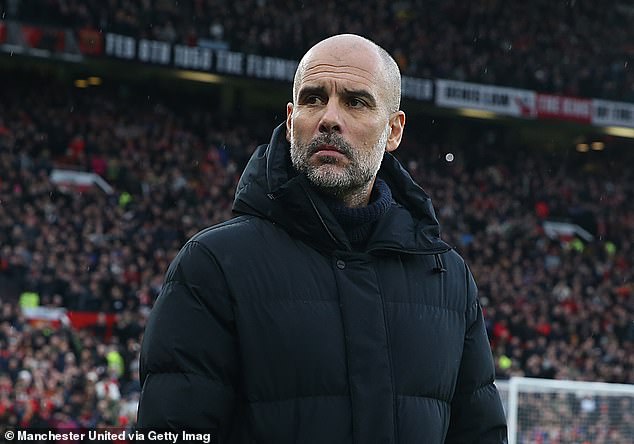 Guardiola is entitled to his say. He’s earned it. And he enjoys the universal respect of City’s fans. Guardiola wants more from everybody so he’s entitled to demand more from the fans, too. It’s the way he works. It’s part of what makes him a genius and a serial winner. He never lets his intensity drop and when he sees it drop in others, it galls him and he cannot keep his anger in.

Others, though, have jumped on City fans a little too quickly. They have been the butt of jokes for some time, especially since they were bought by Abu Dhabi in 2008 and accelerated into the most successful era in the club’s history. City’s fans were accused of being arrivistes, the nouveau riche of English football, an elite side that can’t even sell out its own stadium. Rival supporters amuse themselves by referring to the Etihad as ‘the Emptihad’ for that reason.

I’ve never understood the mocking of City fans. Sure, some of them can be a bit thin-skinned in the face of criticism of the ownership model of their club but that hardly makes them unusual in English football. I was a regular at Maine Road in the Seventies and Eighties so my memories are as much of Jim Tolmie and Nicky Reid as they are of Dennis Tueart and Peter Barnes and when times were bad, City fans stuck with their team.

They are not fickle fans. They’re the opposite of fickle, actually. They stayed loyal through thick and thin. They took pride in standing by their side in the bad times and, whatever one’s view of state ownership in the Premier League, it seems perverse to begrudge the supporters the times of plenty they are enjoying under Guardiola. They’ve earned it, too, frankly. 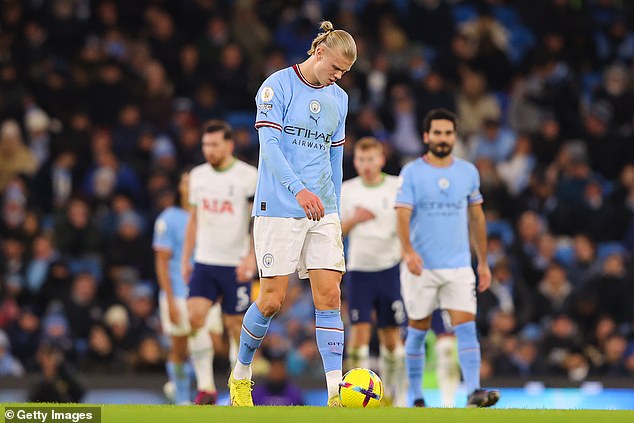 As for them booing their own team, well, I’ve heard worse. It wasn’t personal. They weren’t chasing players’ cars down the street as they tried to drive away from the stadium. It wasn’t vicious. It was a grumble. They were in good company because Guardiola was grumbling, too. ‘We’re a happy flowers team,’ said Guardiola afterwards. ‘Happy flowers organisation. Ah it’s good. No, I don’t want to be a happy flower.’

It seems as if the fans agreed with that sentiment. They didn’t want to be happy flowers, either. They wanted more. Like most of the rest of us, they think City are the best team in the Premier League but, like most of the rest of us, they could see the title slipping away in front of their eyes at the end of that first half on Thursday night. They could see them staying eight points behind Arsenal and so they vented their dismay.

Maybe it had a beneficial effect. Whether that gave the team a jolt, whether it was something Guardiola said in the changing room, whether it was the City players’ professional pride, doesn’t really matter. But they came out after half-time a team transformed.

City fans know how lucky they are to have this team and this manager. They know they have travelled a million miles away from those midweek nights at Maine Road, losing against Port Vale. And they don’t want to waste a minute of their new life. They don’t want to blow the opportunity to win even more. Criticise them for booing if you want to but the criticism is misplaced.

Yems’ ban should be for longer

John Yems, the former boss of Crawley Town, lives in a fantasy land where he thinks he is owed an apology because his fondness for racist ‘banter’ earned him a 15-month ban from football. Yems denies being a racist.

The game turned a blind eye to men like Yems for too long, but the sad truth is that his idea of humour is exactly the kind of attitude that continues to drive young black men — and women — away from the sport.

Those are the people who are owed an apology. Yems’ ban should have been longer. 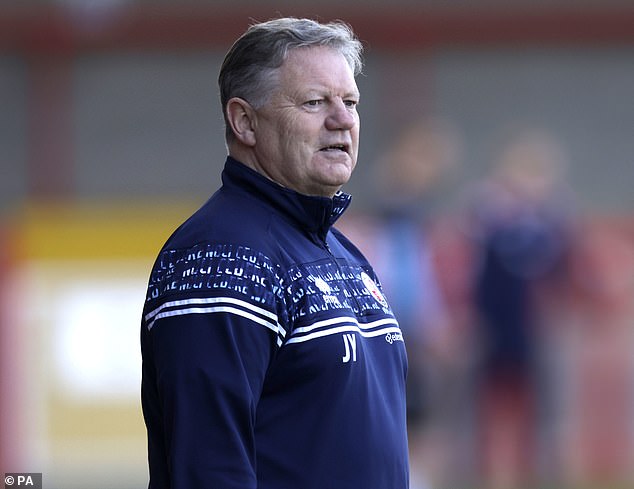 I am glued to the Prince of tales

Moehringer was also the ghost for Andre Agassi’s autobiography, Open, which is one of the best sports books I have ever read.

So, following on from my list of favourite footballers last week, alongside Open in my list of favourite sports books, I would include Night Train by Nick Tosches, Playing for Keeps by David Halberstam, King of the World by David Remnick, The Life and Crimes of Don King by Jack Newfield, Opening Up by Michael Atherton, The Death of Ayrton Senna by Richard Williams, England Football: The Biography by Paul Hayward and The Damned United by David Peace.

Ahead of their fight on Saturday night, Liam Smith thought he could shame Chris Eubank Jr by suggesting his rival was gay.

But he made himself look like an ugly, homophobic, prehistoric bully. The only person Smith shamed was himself. 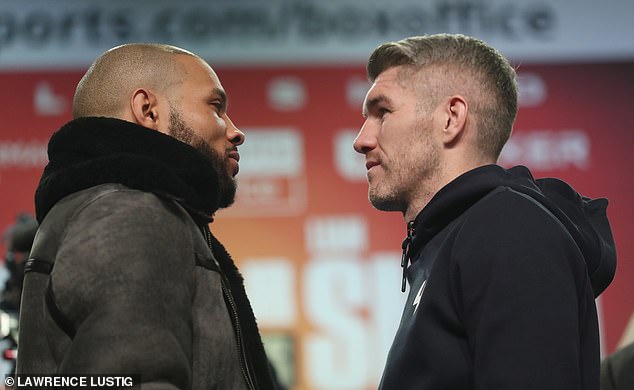