Home » Soccer » Pain, but no need for England shame as football goes to Rome

It was, as the old cliche says, deja vu all over again. Almost, but not quite for England.

For this England supporter, the penalty shootout defeat to Italy in the Euro 2020 final on Monday morning (AEST) did not feel anywhere near as bad as all those other “oh so nears” that have left fans devastated “down the years”. 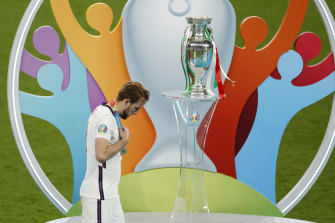 So close, but so far: Harry Kane walks past the trophy after losing the Euro 2020 final on penalties.Credit:Getty Images

Whether football actually has a home is immaterial, but, as the Italian supporters holding banners in the Wembley stands and honking car horns around the world – from Lygon Street in Melbourne to the piazza in front of the Duomo in Milan – joyfully pointed out, it’s definitely going to Rome now.

England got the perfect start with that early Luke Shaw goal that only served – cruel twist of fate – to increase the feeling that this perhaps was going to be a night of destiny.

A packed crowd at Wembley, a second-minute lead, a team chock full of Premier League stars and the momentum of six wins in a row? How could they not succeed from here?

But in the end the Italians showed class, character, grit, determination and composure when it was most needed to draw level and, in fact, dominate the second half and periods of extra time.

England’s caution, conservatism, their fear of loss more than their desire to win – which should have been their aim after being handed such a perfect platform – cost them dear.

As anyone who has watched the Three Lions as long as I have – particularly in the chill of an early morning, pre-dawn, winter day in Melbourne – your heart sinks when any game goes to penalties.

England’s record from the spot in such traumatic circumstances is, with few exceptions, terrible, so it was no surprise that Italy ultimately prevailed in the high-stakes drama where the massive frame of their young goalkeeper, Gianluigi Donnarumma, made the difference.

England’s Jordan Pickford might also have made two saves, as did the Azzuri shotstopper, but Donnarumma’s giant presence and fixity of purpose surely contributed to Marcus Rashford’s shot which hit the post, in the end the crucial difference.

But for all of that, even the disappointment of surrendering such an early advantage, this doesn’t feel like such a gut-wrenching loss as that against Germany, for example, in the 1996 Euro semi-final, or against the same nation in the 1990 World Cup semi, or even against Croatia in extra time at the same stage of the 2018 World Cup.

This was an England team that played in the right spirit and with self-belief and courtesy; there were few histrionics, no thuggish tackles and no bad behaviour.

England and Italy are two of the European nations that have been most ravaged by COVID-19, and their footballers brought credit to their countries in this final, as well as giving them a wonderful adventure and exhilarating sense of fun over the month the tournament lasted.

In the end, results are what we remember, but for both sets of fans, and both communities, the journey and the sense of collective enjoyment that the Euro 2020 tournament brought may well last just as long.

For England fans, there is pain but no need for shame. For the Italians it is sheer, unadulterated joy, exhilaration they richly deserve.