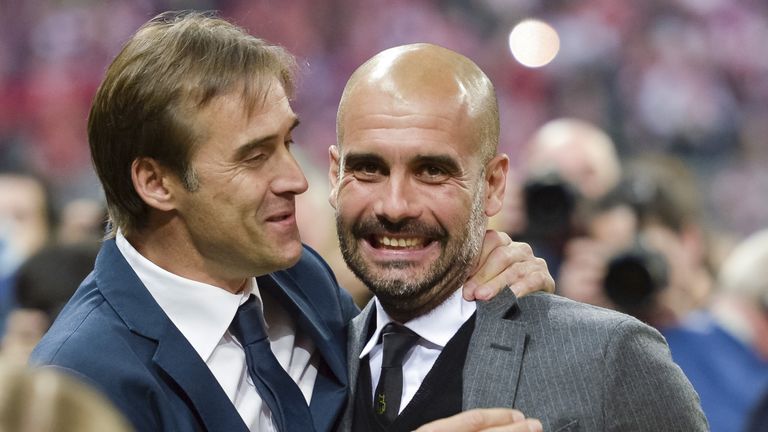 Pep Guardiola says he will reach out to former Barcelona team-mate and friend Julen Lopetegui after he was sacked by Real Madrid.

Lopetegui, who lost his job as the head coach of the Spanish national team just days before the World Cup in Russia after agreeing to join Real, had his contract terminated by Los Blancos on Monday night after losing six of his opening 14 games.

Sunday’s 5-1 El Clasico thrashing by Barcelona was the final blow for Lopetegui and he was axed just a day later, with Real Madrid Castilla B coach Santiago Solari taking interim charge. Asked about Lopetegui’s dismissal after Manchester City beat Tottenham at Wembley, Guardiola said: “I would like to call him in the next days. I’m so disappointed, but I know what football is.

“I’m sorry for Julen because he’s a friend of mine, he’s an exceptional person. We played together at Barcelona, and have an amazing relationship.

“But, it is what it is football. Nobody can escape that. When you have bad results you will not continue in places like Barcelona, Madrid. You win matches in a row, or you won’t have the chance to continue.

“In football and life you will have another chance. And Julen will find another chance, another place and he will show again his value, like he did in Porto and the Spanish national team. “I wish him all the best of course.”

Guardiola, who led Barcelona to a famous treble as coach in 2009, was also full of praise for his former club after Sunday’s win took them top of La Liga.

He added: “I will not deny I am so happy for the victory for Barcelona that still remain the strongest team in Europe, for the quality of the players they have, for the manager, for the club itself, for many, many things.”