Wellington Phoenix are still aiming to base themselves in Australia for the rest of the A-League season despite the Australian government's ruling that all arrivals into the country are to be subject to a 14-day self-isolation period.

The country's new hardline border restrictions emulate those enforced by New Zealand on Saturday and have immediate repercussions for domestic football in Australia and two teams in particular. 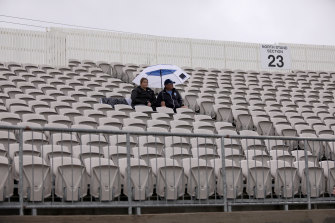 The stands at Netstrata Jubilee Stadium on Saturday were sparsely populated as A-League fans brave the rain and the ongoing threat of the coronavirus.Credit:Getty Images

"It'll probably be all the players – at least the ones who want to go, we're not going to force players to go. We won't mandate it, players have families and there are some players who are expecting children. Do we really want to take them away from their newborn babies?"

The Phoenix were due to face Sydney FC on Wednesday night at Netstrata Jubilee Stadium and Newcastle Jets on Saturday at McDonald Jones Stadium, while Victory have a trip to meet Brisbane Roar on Sunday, and then Perth Glory away the following Sunday.

Conceivably, those four fixtures could be rescheduled and the rest of the competition could proceed as normal, while the Phoenix and Victory see out their self-isolation periods.

"We'll probably be stuck right in the middle of Sydney, in the CBD somewhere. It'll be training – the boys can train, do whatever they need to do, while still being in self-isolation," Dome said. "It's been thrown into disarray into the last half an hour but we've got some plans, we've got some thoughts and we'll just see how it plays out."

The far simpler solution would be to temporarily pause the A-League, but sources close to the ongoing talks claim Fox Sports want to hold the competition to its contract to ensure it has content to broadcast.

Football's 'whole of game' COVID-19 committee is meeting on Sunday afternoon to discuss a way forward for the A-League, which is set to go behind closed doors from Monday in line with government bans on mass gatherings. A statement from the committee is expected either on Sunday night or Monday morning.

Numerous creative solutions had been informally discussed – including Wayne Bennett's idea for the NRL to move all teams to one location and play the rest of the season in the style of a World Cup.

It is difficult to see how that could now be executed in the short-term. Professional Footballers Australia have already canvassed the view of players, who, broadly speaking, want to finish the season but do not want to be exposed to any unreasonable risks relating to travel or public contact.

The situation is an early and rigorous test of Australian football's new governance structures, which have put A-League club owners in charge of domestic football while Football Federation Australia focuses on national team and grassroots-related matters.

The issue of what to do with silverware in the event of cancellation is yet to be properly discussed, with Sydney FC needing just five more points to seal top spot on the ladder after Saturday's results.

Sydney coach Steve Corica said on Saturday that his side wanted to win the A-League premiership the right way, but agreed it would be fair if they were to be awarded the Premiers' Plate if the season can't be finished – a conundrum also being faced by the English Premier League, where Liverpool is on the brink of ending a 30-year title drought.