Steve Corica’s players have given the embattled Sydney FC coach a reprieve from immediate danger after a terrific 2-1 come-from-behind win over Melbourne Victory on Thursday night, which piled more misery on their troubled A-League Men rivals.

The Sky Blues’ shocking first half of the season has put Corica in the gun, prompting speculation that his old teammate Dwight Yorke was already being lined up as his replacement after parting ways with Macarthur FC. 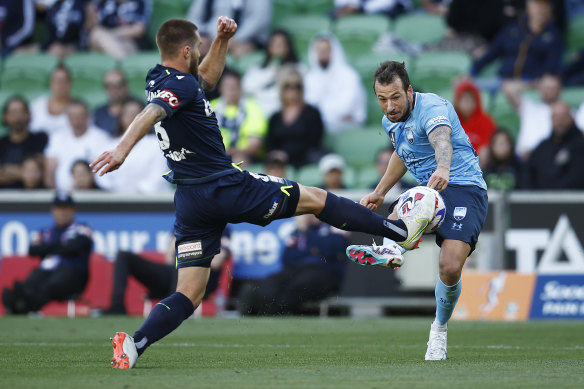 A bad loss to the bottom-placed Victory may very well have forced the club’s board to swing the axe, but two-time championship-winner Corica lives to fight another day after one of Sydney’s best performances in recent memory – although whether this Big Blue triumph can herald a genuine resurgence, in light of the lacklustre nature of Corica’s last 18 months in charge, remains to be seen.

They had to do it the hard way, too, clawing back from a goal down in the first half as a poor error from Socceroos goalkeeper Andrew Redmayne allowed the bottom-placed Victory to take the lead through a long-distance free kick from Jake Brimmer in the 26th minute.

Redmayne effectively gave the reigning Johnny Warren medallist an open invitation to shoot at his near post by getting his positioning all wrong, and Brimmer took full advantage with an arcing shot from the left flank that curled beautifully into the yawning gap left for him by the bearded custodian. 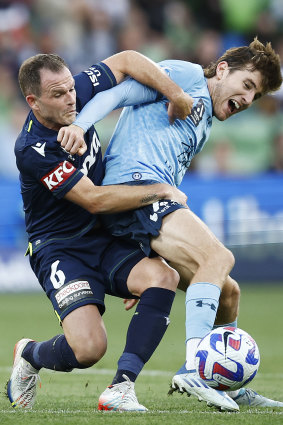 It had all the makings of a brewing disaster for Sydney FC, who were on the back foot against a Victory side winless in their previous five outings but enjoying a sudden jolt of confidence from Redmayne’s act of charity. The hosts also had the backing of a decent gathering of active fans at the north end of AAMI Park, who assembled in defiance of the restrictions enforced by Football Australia for December’s violent pitch invasion, and the club’s determination to dissolve the Original Style Melbourne group held responsible for those ugly scenes.

But the Sky Blues managed to hit back just six minutes later, seizing on a turnover by young Victory defender Matthew Bozinovski as the home side looked to play out from defence. The ball ended up with Max Burgess – a player who many Sydney fans argue has been criminally underused by Corica during their struggles – who found the back of the net with his weaker right foot, with a peach of a shot from the top of the penalty box.

Sydney’s two English imports then combined to great effect early in the second half to give them the lead, with a perfect slide-rule pass from Joe Lolley unleashing Adam Le Fondre, who got the jump on his marker Cadete and finished well to put them ahead 2-1.

From there Sydney were able to close out the match comfortably, but with the second-placed Central Coast Mariners due to visit Allianz Stadium next weekend, Corica cannot afford for this to be a one-off result or performance.

The scrutiny will instead intensify on Tony Popovic, who has credits in the bank as one of the A-League’s most highly-regarded coaches, but who must wear the responsibility for the listless football his Victory team is playing, which is giving weary supporters little reason for optimism.

Sydney FC also prevailed in the A-League Women’s earlier on Thursday, and the fans who turned out for the first clash in the Big Blue double-header were rewarded with an absolute goal-fest.

The Sky Blues prevailed 6-3, with a hat-trick from Princess Ibini inside the first hour boosting her case for Matildas selection for the upcoming Cup of Nations, while also keeping the team’s hopes alive of hauling down Western United and Melbourne City in the race for the premiership.