A withering post-game address in which Dwight Yorke described Macarthur’s A-League side as a “pub team” was the catalyst for a mutual parting of ways between him and the club after just seven months as head coach.

Former Manchester United star Yorke’s time in charge of the Bulls ended abruptly on Saturday night, less than 24 hours after a 1-0 loss to Adelaide United on Friday.

Sources familiar with the dressing room spray, who spoke to the Herald on the condition of anonymity, said Yorke’s speech was delivered to Macarthur’s entire travelling squad, with chairman Gino Marra also witnessing the incident. CEO Sam Krslovic was also present for part of the dressing down.

The term “pub team” was used regarding a Macarthur team sitting sixth on the A-League ladder. Individual players are also understood to have been singled out for criticism by Yorke.

According to those with knowledge of the incident, Marra intervened and attempted to stop Yorke’s address as he took aim at the professionalism and standards accepted across the Macarthur playing group, the club and A-League in general.

While Yorke’s dressing-room spray did not provide grounds for dismissal, it was followed up by a frank conversation between club officials and Yorke, with both parties agreeing to end the coach’s time at the club, effective immediately. 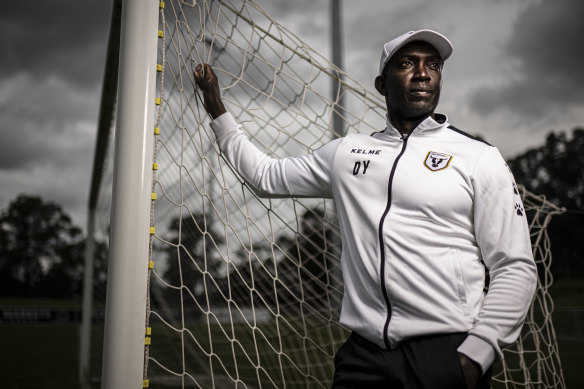 Dwight Yorke’s exit from Macarthur FC was sparked by a dressing room spray that stunned players and staff.Credit:Wolter Peeters

Marra declined to address the incident when approached on Sunday.

“We won’t be commenting on the circumstances of the mutual agreement reached between the club and Dwight Yorke on Saturday,” the Bulls chairman said in a statement.

“Our focus is only the next chapter of the club and appointing a new coach who we hope will deliver more success to our supporters. We thank Dwight for his contribution to Macarthur FC and leading the club to the 2022 Australia Cup title.”

Attempts to contact Yorke on Sunday via his agent Lou Sticca were unsuccessful.

“Dwight is very proud of his time at Macarthur FC, winning the Australia Cup and qualifying for the Asian Champions League,” Sticca said. “He has full faith that the team will go from strength to strength.”

Yorke’s departure has prompted suggestions he is being lined up to take over from his old teammate Steve Corica as coach of Sydney FC.

Corica has been in the crosshairs following seven losses in 13 games this season after missing the finals last year.

The Bulls position was Yorke’s first posting as a manager following a glittering playing career with Aston Villa and Manchester United in the English Premier League. 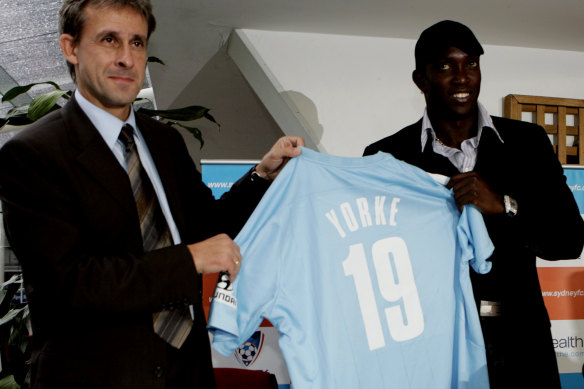 Dwight Yorke (right) during his days with Sydney FC, pictured with then coach Pierre Littbarski.Credit:AP

As Sydney FC’s marquee signing on a little less than $1 million a year, Yorke helped put the A-League on the map during its maiden 2005-06 season, with his announcement as Macarthur coach having a similar effect last year.

Within three months Yorke had helped deliver the Bulls’ first trophy when the club won the 2022 Australia Cup.

In stark contrast to Friday night’s dressing down of professionalism at the club and across the A-League, Yorke lauded Macarthur’s buy-in to his overhaul of the club.

“We changed a few things that weren’t here last year. And the response has been very positive,” Yorke told the Herald ’s Vince Rugari in an unpublished interview last October.

“You can’t want to be a professional outfit, and be successful, when you operate in an amateur way. If we are professional, we have to be professional all around. And so with that, at this level, that comes with professional responsibility, your diet, your food, your intake, all of that.

“The physio, the gym, all of that has to be part of the requirements. So those are things that needed to be changed … it was very simple to change. We just needed the people who were running the organisation to understand what level we need to be at.

“Nothing is ever easy. But I think they understood in the end the requirements that they needed to match for me to do my job properly. To be fair to the owners they have produced the things that we asked them for.”

Watch every match of the UEFA Champions League, UEFA Europa League and UEFA Europa Conference League on Stan Sport. Returns for the Round of 16 in February 2023, with all matches streaming ad-free, live and on demand.