Radamel Falcao’s journeyman career looked to be winding down in Turkey, but Spanish minnows Rayo Vallecano offered the 35-year-old a lifeline… now he is lighting up LaLiga once more

Say the name Radamel Falcao to an avid football fan and immediately memories are conjured of a powerful forward with the deft touch of an artist careering through defences and scoring the most sublime of goals.

Heroics for Porto, Atletico Madrid and the Colombian national team come to mind, when the man they call El Tigre was very much in his pomp.

His failed Premier League tenures with Manchester United and Chelsea have, however, heartily contributed to the narrative that Falcao is past it, another addition to European football’s has-been pile.

And so, when just a couple of months ago Turkish giants Galatasaray decided Falcao needed to head for the exit door in order to ease the burden on club finances, the end naturally looked near. 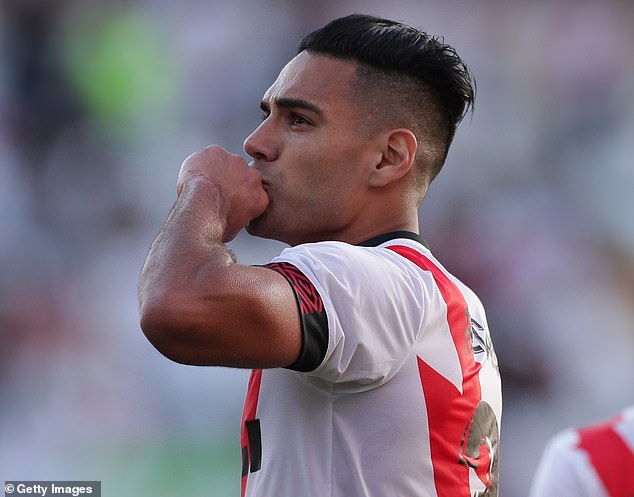 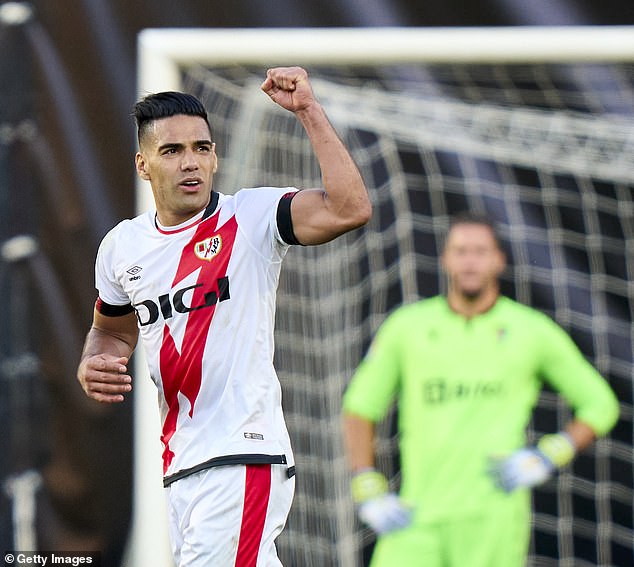 The Colombian was sadly deemed surplus to requirements.

So much so that he was urged to rapidly find a new club and benched for Galatasaray’s Europa League qualifying match with Scottish outfit St Johnstone.

At the age of 35, when this sort of ultimatum comes the future rarely looks bright. Falcao himself perhaps momentarily considered the time was ripe to finally call it a day, and many fans were thinking likewise.

But then, with one call from a little known yet ambitious LaLiga outfit, everything changed…

Newly promoted Rayo Vallecano made it clear to Falcao from the outset that he would be the main man at the club, despite their budget being vastly inferior to the sort of riches he had become accustomed to.

Still, after terminating his contract in Turkey, Falcao was more than happy to make the switch back to the Spanish top flight, where he previously enjoyed much success with Atletico Madrid.

Playing in the famous white and red stripes in the Spanish capital, Falcao scored 70 goals in 91 appearances for Atletico, winning the Europa League along the way during a spell of just over two years with the club.

Now, in the twilight of his career, Falcao packed his bags and headed back to the country that had treated him so well, with a point to prove. 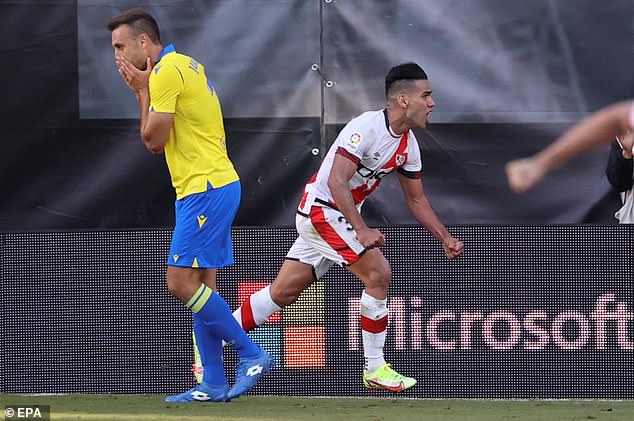 Falcao’s goals have seen minnows Real Vallecano soar up the table as a result, into fifth place

After gaining promotion to the Spanish top flight, Real Vallecano knew swift action needed to be taken after losing their opening two matches and conceding four goals along the way. 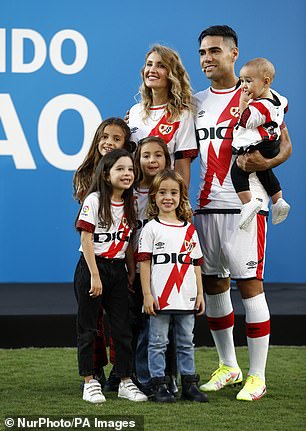 Both Sevilla and Real Sociedad gave the plucky challengers a sharp reminder of what it means to be a LaLiga side, and it was therefore a case of right time, right place when the club delved into the transfer market to discover Falcao was, somehow, available.

A deal was quickly struck, with El Tigre making minimal fuss of the minor contract details, providing he could get up and running in the squad as soon as possible.

Perhaps the uplift of Falcao’s imminent arrival boosted the squad, as a 4-0 victory over Granada in late August would suggest.

Nevertheless, it took just one match for Falcao to get going. Getafe were the opponents, as he seized his moment to shine in the 81st minute and slotted home in front of the returning home fans to seal a 3-0 victory.

The road to redemption was very much taking shape. 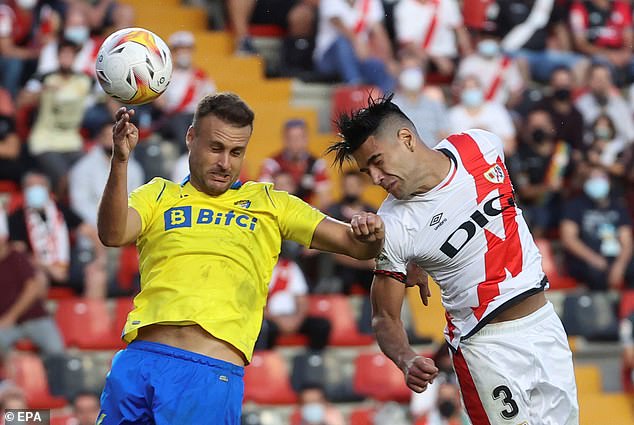 It’s fair to say that with Falcao leading the line, unpolished and unproven Real Vallecano feel like they can take on anybody.

The Colombian’s home debut was quickly followed by a tense 2-1 away victory over Athletic Bilbao and a 3-1 home win over Cadiz.

Of the two matches, Falcao snatched a dramatic 96th-minute winner in the former, and a goal on the cusp of half-time en route to a 3-1 win in the latter.

With Falcao Real Vallecano have quickly become fearless, and the player himself is riding a wave of confidence as a result. 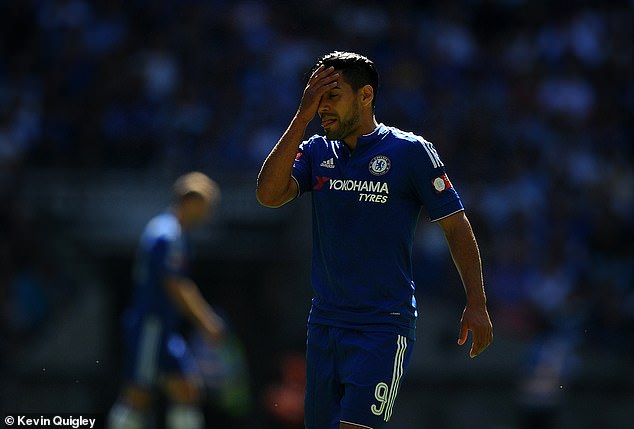 Unlike his miserable spells with Chelsea and Man United, Falcao looks at home back in LaLiga

Long gone are the days in which Falcao could be seen standing around Premier League grounds, hands on hips and face sunken while playing for both Manchester United and Chelsea. 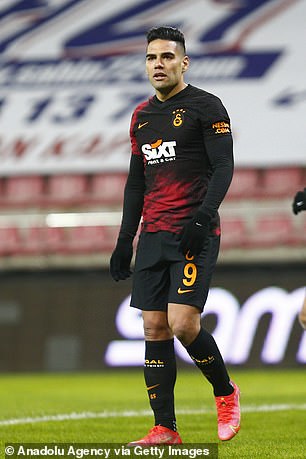 These so-called ‘pinnacle’ career moves never worked out kindly for Falcao, and his status as one of the finest forwards in recent European football history took a battering as a result.

Now though, the striker is both talking the talk and walking the walk for the Madrid-based side, showing he can still very much turn on the style when in the familiar surroundings of the Spanish capital.

He is very much back to doing what he does best and firing his side up the table as a result.

To offer some context, Real Vallecano are currently a point ahead of Barcelona (having played a game more) and are multiple points ahead of the likes of Real Betis, Valencia and last season’s Europa League winners Villarreal.

For a player who was widely warned against returning to Spain in order not to tarnish an already remarkable reputation as a goalscorer, Falcao – who strangely now dons the No 3 shirt for his new club – stuck to his guns and believed in his ability to continue producing the goods.

There is now a rather burning question of whether Atletico Madrid are looking across at Falcao’s exploits with a tinge of regret.

After all, taking a gamble on a so-judged veteran striker last season paid off handsomely, as the club brought in Luis Suarez from Barcelona and collected a league title as a result.

Atleti have a nice habit of making stellar decisions when it comes to their forward line, with Falcao himself a perfect example of buying a player at the pivotal moment and making him into a world beater back in 2011.

Perhaps it was the emotion of a comeback that made Diego Simeone’s side err on the side of caution, especially since Antoine Griezmann had already made something of an awkward prodigal son’s return this summer. 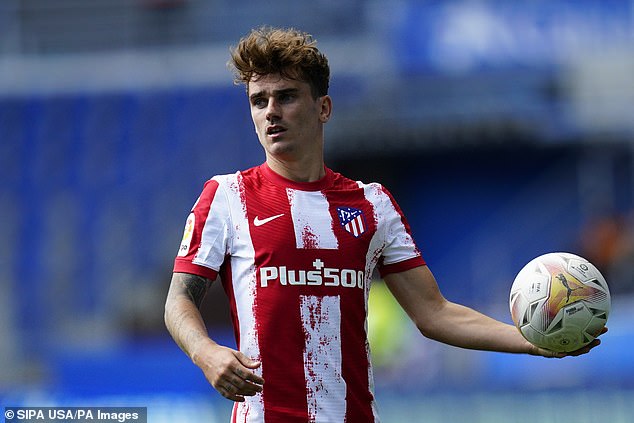 Yet whereas Griezmann has faltered and failed to impress so far at the Wanda Metropolitano, Falcao has clicked into gear and playing very much as though he has a point to prove.

As it stands Falcao is the joint fourth-top scorer in LaLiga, with the same amount of strikes as Suarez and the likes of Real Madrid’s Marco Asensio.

He also, at the current time of writing, boasts a quite ridiculous 100 per cent shot accuracy this season.

Falcao is well aware of his limitations when it comes to age, though his rebirth in LaLiga is seeing the Colombian turn into a wily old fox.

Spaces are being taken up at the pivotal moment, with Falcao using his football brain to ensure half the work is already done, before simply needing to unleash a shot or a trademark powerful header.

His minutes on the field thus far are vastly inferior to most other forwards in the league, giving him an incredible ratio of one goal per every 32 minutes. 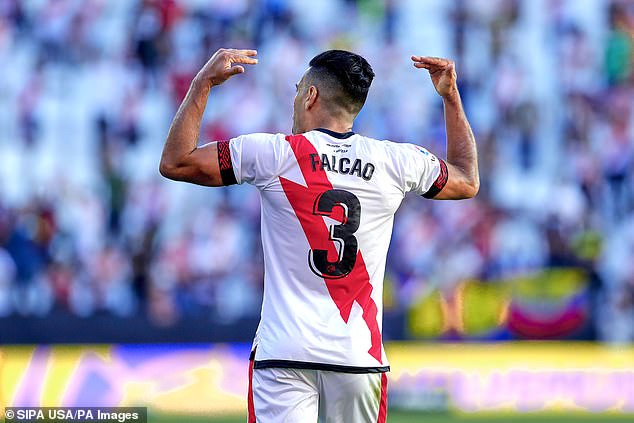 Bizarrely wearing the No 3, Falcao is thriving up front and has a sublime goals per game ratio

Not bad for a player whose soul was supposedly sucked out by dismal stints at Old Trafford and Stamford Bridge, before being hung out to dry in Turkey.

A long season lies ahead and perhaps ultimately Rayo Vallecano and Falcao won’t have the stamina to go the distance and make this into a truly memorable campaign.

But this is football, and stranger things have happened. For fans of the small Madrid-based club these are glorious, exciting days. For Falcao, it’s back to what he knows best.