Rangers have “welcomed” the 10-game ban for Slavia Prague’s Ondrej Kudela’s, but insist they will appeal the punishments for Glen Kamara and Kemar Roofe. The Europa League clash between Rangers and Slavia Prague last month was sadly overshadowed by an alleged racist remark from Kudela to Kamara.

Kudela was seen covering his mouth as he approached Kamara, but strongly denies the “disgusting accusation”.

He was provisionally banned for one game pending an investigation from UEFA but has now been suspended for 10 matches.

Rangers believes the punishment handed down to Kudela “vindicates Kamara”, but they were not happy with subsequent bans for Roofe and the 25-year-old. 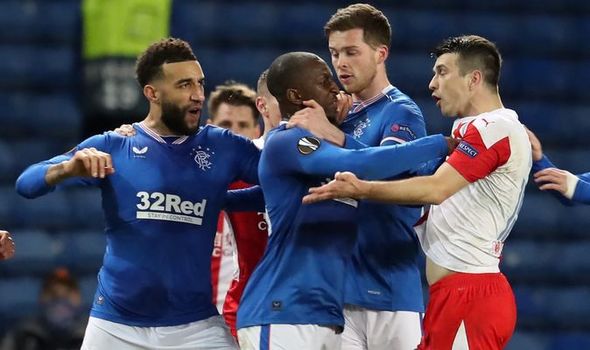 Kamara was found guilty of assaulting Kudela in the tunnel after the match had finished while Roofe was banned for four games for a nasty challenge on Slavia Prague goalkeeper Ondrej Kolar.

Rangers call the sanctions on their two players as “severe” and plan to lodge an appeal.

“We welcome the suspension imposed on Ondrej Kudela.

“This not only vindicates Glen Kamara’s evidence but underlines the severity of the comment, given the number of games which have been imposed by UEFA.

“Nevertheless, we believe the sanctions imposed on our two players (Glen Kamara and Kemar Roofe) are severe.

“We have written to UEFA, seeking clarification in writing on the basis that we intend to appeal the suspensions on both of players.

“We will make no further comment on this matter.”