Rangers have been tipped to sign Peterborough United striker Ivan Toney as a replacement for Alfredo Morelos – and have money left over to further strengthen Steven Gerrard’s first-team squad.

The Scottish Premiership giants are facing the prospect of losing Morelos to Lille, who have identified the 24-year-old forward as the man to fill the void left by Napoli new boy Victor Osimhen.

Ibrox bosses are demanding around £20m and Gerrard has admitted the club are “ready” if they need to source a replacement.

Toney has been linked with Rangers and Old Firm rivals Celtic after firing 24 goals in 32 appearances for Peterborough in League One before the campaign was curtailed due to the coronavirus pandemic.

Brentford have reportedly had a £5m offer accepted but former Aberdeen striker Noel Whelan believes Rangers could swoop and have money to spare for other transfer targets. 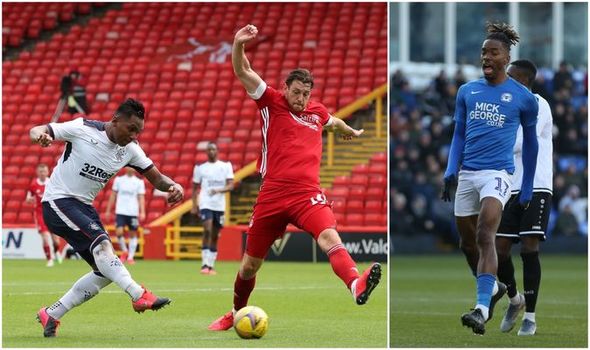 “You’re just hoping Steven Gerrard’s got someone in line, they’ve been linked with Toney, Ivan Toney, so he’ll probably get him for a lot cheaper which means there’s money to spare,” Whelan told Football Insider.

“You can go out and get Toney for what, £5-6m, and then have £10m left over that I’m sure they’re going to put it all out there on the field.

“They’re going to need players to go and challenge Celtic this season so it might free up that money to go and get another two or three players that’s going to help them challenge.”

It was feared Morelos would miss the Scottish Premiership opener against Aberdeen but the Colombia international took the pitch at Pittodrie and created Ryan Kent’s goal in the 1-0 win.

Speaking before the match, Gerrard insisted Rangers would only sell Morelos if their demands were met.

“This will work itself out if there is an offer that’s big enough that the board want to accept,” he said.

“We’ll make that decision when it comes. At the moment, we’re nowhere near that, so Alfredo is still a Rangers player.”

Rangers signed Morelos from HJK Helsinki in 2017 for around £1m.