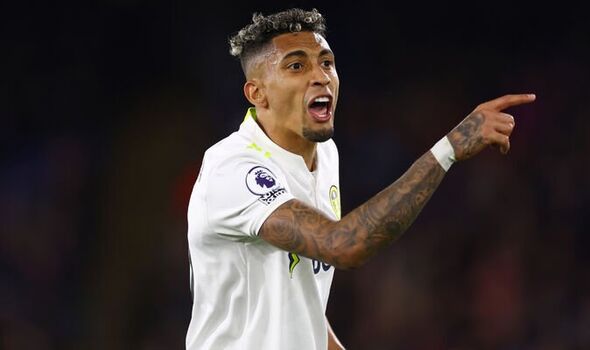 Leeds winger Raphinha is reportedly in ‘very advanced’ talks with Barcelona over a blockbuster transfer to the La Liga giants. The Brazilian has been one of the Whites’ best players since their promotion to the Premier League but has been unable to keep them away from a relegation battle this season.

Raphina will be in demand this summer, regardless of Leeds’ top-flight status. Barca have long been interested in the 25-year-old.

Head coach Xavi Hernandez has set about rebuilding the Catalan outfit after recovering their campaign. Barca’s season looked like it was going to be a disaster before Xavi replaced Ronald Koeman in November.

After finishing the Spanish season as runners-up to Real Madrid, they have been linked with some of the biggest names in world football. The club have now eased the financial issues that plagued their business last summer and are now a long way from the situation in which Lionel Messi was forced to depart.

Leeds’ Raphinha has been targeted as Xavi aims to replenish his forward line, according to a column by transfer guru Fabrizio Romano. It comes after Pierre-Emerick Aubameyang and Ferran Torres arrived at Barca in the January transfer window.

Barca are in ‘very advanced’ talks with the player and his agent – the former Chelsea midfielder Deco – over a deal until 2027, the report claims. But they are yet to discuss at length with Leeds as the Spanish outfit want to respect the Yorkshire side’s battle against relegation.

Leeds have endured a difficult season but boosted their survival hopes with a last-gasp equaliser against Brighton on Sunday. Pascal Struijk scored deep into injury time to secure a 1-1 draw, helping Jesse Marsch’s side leapfrog Burnley and move a place outside the relegation zone.

Raphinha has contributed significantly despite Leeds’ plight. He has scored 10 goals and provided assists for a further three strikes this term.

His form has caught the attention of some of Europe’s top clubs. Chelsea were said to be in discussions to complete a transfer before sanctions were imposed on the west Londoners, preventing them from spending money or agreeing new contracts with current or targeted players.

That has allowed Barca to move ahead in a possible transfer. Raphinha wants to join the club and has a release clause of around £21million, but it is unclear whether that is dependent on Leeds’ relegation to the Championship.

Despite their eased financial worries, Barca still need to recoup funds this summer and have put plenty of fringe stars up for sale. Midfielder Frenkie de Jong has been linked with a £72m switch to Manchester United.

Express Sport understands that De Jong is a target for the Red Devils, but reports last week that a deal is close are premature. Incoming head coach Erik ten Hag worked with the Dutchman at Ajax and green-lighted his 2019 transfer to Barca.