In the latest edition of Ref Watch, former Premier League referee Dermot Gallagher assesses the key incidents from the weekend’s games, including an incident that provoked debate at Old Trafford.

INCIDENT: Danny Welbeck was unable to reach Neal Maupay’s cross under the close attention of Harry Maguire but though the Brighton striker appeared to feel a tug back, no penalty was given.

DERMOT’S VERDICT: “I think Mike Dean wasn’t convinced it was a foul and the VAR can’t intervene because being a subjective decision that it is… is it a coming-together or has he slipped?

“Mike Dean has a difficult call. He’s not sure if Maguire catches Welbeck and the VAR, when he looks at it, has to go with the referee as it’s not a clear and obvious error. It’s one of those where you have to accept the ref’s decision on the field and stand by it.

On comparisons with David Luiz’s challenge at Molineux, where a red card and penalty were given: “I think the one at Molineux was slightly easier in the sense that David Luiz was tracking the forward; in the Welbeck case, they’re both lunging for the ball.

“Mike Dean is not convinced that Welbeck, when he’s stretching, is off balance. It’s a tough, tough call but I can understand why Mike Dean wasn’t convinced and there’s no way the VAR can intervene.”

INCIDENT: Villa were awarded a penalty in first-half stoppage time after Mario Lemina looked to have clipped Ollie Watkins but Andy Madley reversed his decision after being advised by VAR to go to the pitchside monitor.

DERMOT’S VERDICT: “To the referee, it looks a penalty but when he’s sent to the screen, you see quite clearly that the defender plays the ball. He gets the ball first – the angle it travels tells you that.

“It’s a great intervention by Stuart Atwell because he knows that it is an error. This is what VAR was for.”

INCIDENT: Thiago Silva, having been earlier booked for hauling back Matheus Pereira, is sent off after being given a second yellow card for what was deemed a reckless challenge on Okay Yokuslu.

DERMOT’S VERDICT: “It’s was a reckless challenge. He’s out of control. The referee thought it was a second yellow and dismissed him; seeing the pictures I can understand why.”

DERMOT’S VERDICT: “I think this was again a really good intervention by the VAR. The referee is not convinced but the VAR sees the ball’s gone and Walker-Peters has wrapped his legs around him. There was physical contact from Pieters in the build-up but they were both challenging for the ball; I wasn’t convinced it was a foul.”

INCIDENT: Jan Bednarek pulls back a diving Chris Wood by the shirt but, to Sean Dyche’s dismay, a penalty is this time not given.

DERMOT’S VERDICT: “I think the defender is very lucky. You see how far the shirt comes out; you’re looking to see how far it’s extended. The only thing that I can think of that saved him is that he let go very quickly and because Wood was diving for the ball, it may have been felt that he was going to ground himself. But I think [Bednarek] was very lucky not to give away a penalty.” 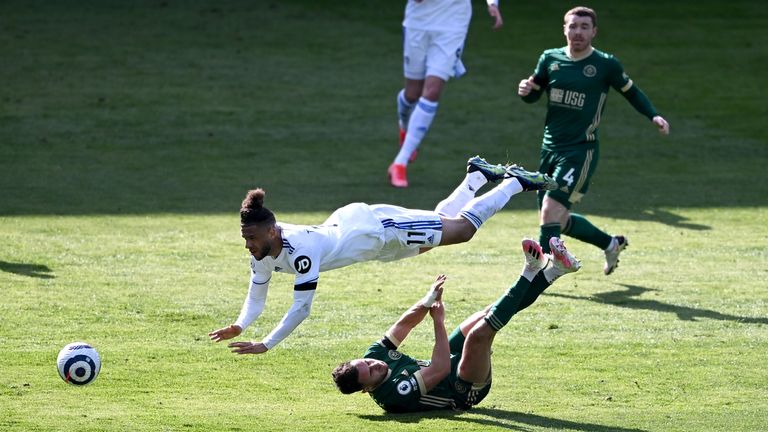 INCIDENT: Sheffield United’s George Baldock sends Tyler Roberts flying after a heavy challenge but comes off worse. The Blades defender re-enters the fray but soon has to depart with the Blades this time making a concussion substitution.

DERMOT’S VERDICT: “It certainly shouldn’t have been play-on. Any referee looking at that, whether you think it is a red card or a yellow, there has to be a sanction; you’ve got to stop the play.”

On concussion protocols and whether further changes to the rules for player protection are required: “[Baldock] was inspected by his medical team and the doctor felt it was ok. The protocols were applied, he was given the all-clear but then they looked at him again after and he was substituted when he complained of blurred vision.

“It may well be that we could tweak this again so teams could use a temporary substitute but certainly from the start of the season, we’ve made massive progress. It’s far better than it was, everyone has bought into it and every single incident is something to learn from.”