BRISBANE Roar are poised to add more attacking thrust to their squad on Sunday for the visit of Wellington Phoenix to Suncorp Stadium.

The make-up of the Roar’s bench in their weekend 1-1 A-League home draw with Central Coast Mariners raised some eyebrows, with Henrique the only out-and-out attacker among the substitutes.

It was a change from Aloisi’s usual squad make-up, particularly at home, where he normally has an extra attacking option rather than two defenders among his substitutes.

Of the outfield bench players, neither Bowles or Nigro were used, which points to a waste of a substitute in a game where the Roar were chasing a win after going a goal down early. Aloisi said his decision to have both Bowles and Nigro on the bench was precautionary in case left back Connor O’Toole and centre back Avraam Papadopoulos – ­ who had not played an A-League match since breaking his ankle in March – could not last the 90 minutes.

A-League TV – Is the Usain Bolt experiment over?2:21 The Daily Telegraph’s Tom Smithies and Emma Kemp analyse the Usain Bolt situation and whether he will sign with Central Coast Mariners… or not.

“Connor had been carrying a little bit of an injury so we just had to be aware, and for Avraam, it was his first (competitive) game back,” Aloisi said.

“We had to be mindful of how they were going to go through the game, but I noticed that Connor ran through the game really well. I thought he was strong, so we didn’t have to make that change. 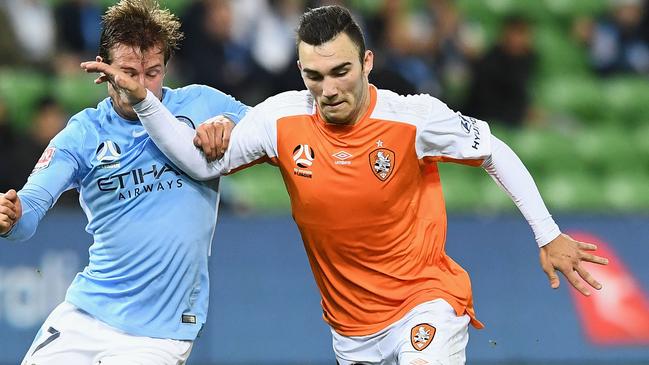 Nick D’Agostino could come in for the Roar on Sunday. Picture: Getty ImagesSource:Getty Images

“Avraam said he felt a little bit heavy the last 10 or 15 minutes, but it was good for him to get those 90 minutes.

“In the end we were lucky we didn’t need to make those changes.”

Club skipper McKay wasn’t used until the 84th minute when he replaced arguably the best player on the park, Spanish midfielder Alex Lopez.

McKay’s is facing a tough task to win back a starting spot on the basis of Lopez’s weekend performance.

“I thought it was a good opportunity for me to play Alex and he showed he was ready for it,” Aloisi said.

“(McKay) was disappointed because he didn’t start, but he was there for the players, for me, he was there like a leader that he is.”