Bayern Munich striker Robert Lewandowski reportedly already has offers on the table from Manchester United, Manchester City, Chelsea and Paris Saint-Germain. Lewandowski has two more years on his Bayern contract but has been linked to other clubs following a fantastic season for the German giants.

The 32-year-old striker netted 41 league goals in the 2020/21 season for Bayern to break Gerd Muller’s Bundesliga record, which had stood for 49 years.

Lewandowski is one of Europe’s elite goalscorers and has unsurprisingly attracted interest from some of the continent’s biggest clubs.

He is currently focused on Poland’s campaign at this summer’s European Championship, but his agent Pini Zahavi is bound to be busy in the coming weeks.

According to AS, Lewandowski is ‘open to the possibility of changing of scene and facing new challenges’ this summer – a stance which will be music to the ears of Bayern’s rivals.

Bayern are understandably ‘very reluctant’ to lose their main man, but the Polish striker already ‘has offers from several top teams’. 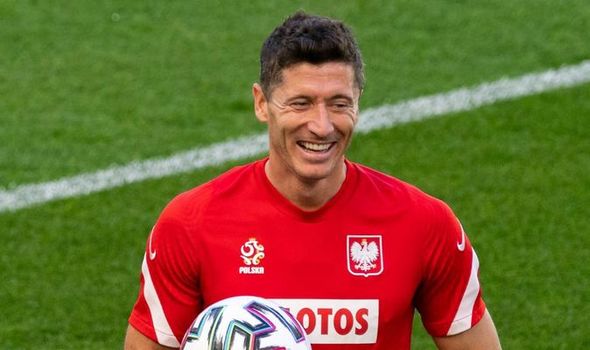 The report says PSG, United, City and Chelsea have already made their pitches to Lewandowski, while Real Madrid are also keen on his signature.

Real came close to signing Lewandowski in 2014 when he joined Bayern from Borussia Dortmund and is a favourite target of Los Blancos president Florentino Perez.

The Spanish giants tried their luck again in 2016, but the Pole ended up renewing his contract with Bayern.

However, despite their efforts being rebuffed previously, Real do have hope because Lewandowski’s ‘dream has always been to play for Madrid’.

That desire is apparently why he switched agents from Cezary Kucharski to Zahavi five years ago.

While Bayern might keep hold of him this summer, there is a suggestion the German club could be more receptive to offers next summer, when Lewandowski enters the final 12 years of his contract.

The likes of Real, United, City and Chelsea will also take confidence from what Lewandowski said about his plans earlier this month.

“I’m still open-minded,” he said when asked about his future.

“I feel good at Bayern, the city is magnificent, it’s a great club.

“I’ve always been curious to learn a new language, a new culture. But I don’t know if it will be in football or after my career. Not even I know.”

City are looking for a replacement for Sergio Aguero, who is joining Barcelona as a free agent at the end of the month, while Chelsea want a world-class goalscorer to add to their squad.

United are reportedly less concerned about a striker this summer having signed Edinson Cavani up for another year, with a deal for Dortmund’s Jadon Sancho more important.