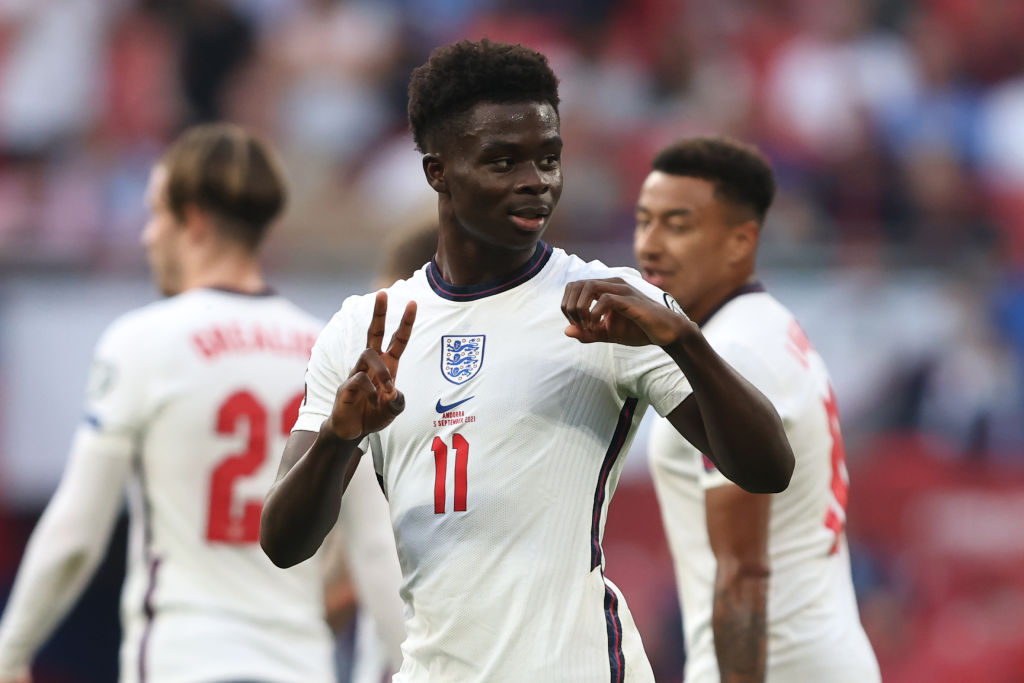 Roy Keane was not slow to aim a dig at Arsenal after Bukayo Saka scored in England’s win over Andorra on Sunday, saying: ‘ I’m sure he’s going to enjoy the win because he’s not getting many at club level.’

England cruised to a 4-0 win over Andorra at Wembley, barely getting out of second gear, but it was a great day for Saka who headed in the final goal on his 20th birthday.

His goal came at the same end of Wembley at which his penalty was saved by Italy’s Gianluigi Donnarumma in the final of Euro 2020 and Keane is impressed with how the youngster has dealt with that heartbreak.

However, the Manchester United legend was also very happy to mock Saka’s club team, with Arsenal sitting bottom of the Premier League with three defeats from their first three matches.

‘Football’s all about dealing with disappointments. He had a tough summer, he’s reacted well, seems a good kid,’ Keane said on ITV. ‘Obviously a nice day for him today and scoring with a header.

‘I’m sure he’s going to enjoy the win because he’s not getting many at club level so he’s got to make the most of it.’

Saka was delighted to score his second international goal in his 11th appearance for his country, especially as he was receiving a rousing reception from the Wembley crowd on his birthday.

‘That’s the perfect birthday present for me. I’m really happy we got the win,’ he said.

‘I’m really happy with the reception everyone gave me, it really shows how proud they are of me and I think that meant a lot for me, it made me want to give my all.

‘This is what I dream about, play at Wembley in front of my family, a full crowd and score on my 20th birthday, so I’m really happy.’

It was a straight forward win for England but Keane was not overly impressed, feeling that the Three Lions were taking it too easy and it wasn’t until the arrivals of Jack Grealish, Harry Kane and Mason Mount in the second half that things picked up.

‘I was disappointed with the game. It went a bit flat and I was looking for certain players to up the ante and create something,’ said the Irishman.

‘The pace dropped and I was disappointed with some of the senior players, you’ve got to keep that up and do things quickly.

‘It was only when he made the changes that changed the momentum of the game. Overall I was disappointed, I don’t think Gareth would have learned too much from today,’

Jesse Lingard scored twice for Gareth Southgate’s side, with a Harry Kane penalty the other goal in the game.