Raphinha scored his first goal for Barcelona and Lewandowski got his FIFTH for the club as Xavi’s side comfortably beat troubled Sevilla 3-0.

Barcelona’s embarrassment of attacking riches was too much for Sevilla who go into their Champions League game next week against Manchester City deep in crisis having taking one point from their first four games.

Coach Julen Lopetegui is under pressure although an awful summer’s transfer dealings has had much to do with the club’s shocking start. 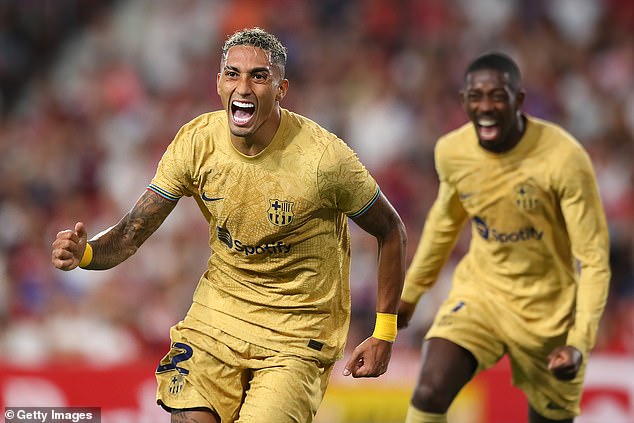 Barcelona won the transfer window in Spain and many of the new signings played their part as they romped to victory.

Xavi started with Raphinha, Ousmane Dembele and Lewandowski up front and they were all involved in the opener on 21 minutes.

Gavi won the ball in midfield and Sergio Busquets helped it on to Dembele who ran at the heart of Sevilla’s creaky defence. He played in Lewandowski and when the Polish striker clipped the ball over Bono it was cleared by Fernand but Raphinha swept it in from close range. 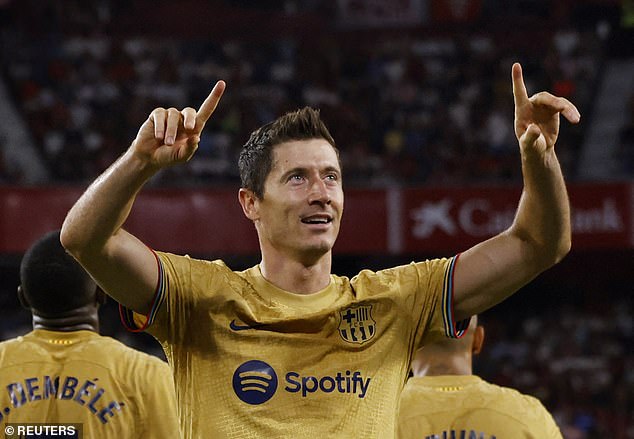 Raphinha almost scored a spectacular second with a curling shot from distance but Sevilla only made it to 36 minutes before they went two goals behind. Lewandowski got on the end of a deep Jules Kounde cross from the right taking the assist on his chest before volleying home. Kounde, the former Sevilla defender is one of the reasons why Barcelona are so optimistic about this season and why Sevilla are a shadow of their former selves.

Eric Garcia got the third in the second half when Dembele took a short corner to Raphinha who floated the ball to the back post. Kounde headed it down and the former Manchester City defender converted.

Barcelona were able to bring on Frenkie de Jong and Ansu Fati in the second half and both went close. There was even a run out for Jordi Alba replacing the young left back who now seems ahead of him – Alejandro Balde. 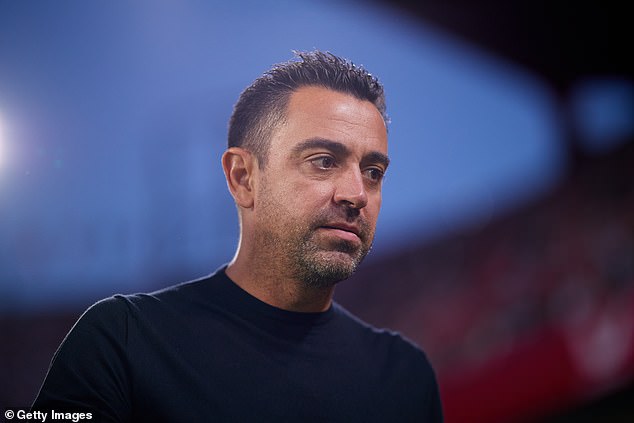 For Sevilla there were few positives. Isco started his first game and was bright in the first half. His fine early pass sent Youssef En-Nesyri through but his shot was saved by Marc Andre ter Stegen. Isco also blazed over from six yards out but his blushes were saved because the flag had been raised.

Some Sevilla fans made their feelings felt with jeers at the final whistle. For Barcelona all the post-match questions were about controlling the euphoria. ‘We know there is a long way to go,’ said Raphinha.

‘We are in a difficult situation,’ said Ivan Rakitic. ‘We understand the fans’ frustration. We are still completely with the coach. We will get out of this.’