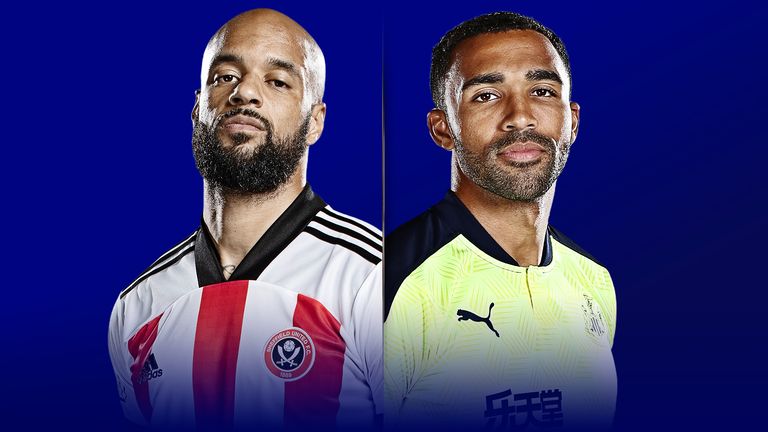 Team news and stats ahead of Sheffield United vs Newcastle in the Premier League on Tuesday, live on Sky Sports; kick-off 6pm.

Sheffield United will check on several players ahead of the game at Bramall Lane.

Positive coronavirus tests and injuries have hit the Blades hard recently as George Baldock, Enda Stevens, Billy Sharp and Phil Jagielka all missed the FA Cup win against Bristol Rovers on Saturday, while Lys Mousset went off injured at the Memorial Stadium.

Boss Chris Wilder expects all five players to be fit for the home match against Tottenham at the weekend, but Tuesday could come too soon for some, meaning the likes of Jayden Bogle and Ben Osborn could keep their places.

Oli McBurnie is still sidelined but Oli Burke scored his first Blades goal in the club’s first win of the season and will hope for another chance to impress, while Rhian Brewster was an unused substitute and may come back into contention.

Newcastle rested a number of key players for their FA Cup third-round tie at Arsenal and top goalscorer Callum Wilson is expected to return against the Blades.

Defenders Fabian Schar and Federico Fernandez were also left at home and should come back into the XI while Ryan Fraser (groin) is back in full training.

Jamal Lewis (knee) will need to be assessed, but Allan Saint-Maximin is still yet to recover fully after suffering with coronavirus while Jamaal Lascelles returned from the virus to play 45 minutes on Saturday and could be on the bench.

Sheffield United vs Newcastle will be broadcast live on Sky Sports Premier League and Main Event from 5.30pm on Tuesday; kick-off at 6pm. Sky Sports customers can watch in-game clips in the live match blog on the Sky Sports website and app. Free highlights will also be published on the Sky Sports digital platforms and the Sky Sports Football YouTube channel shortly after the final whistle.

This week on the Pitch to Post Preview Podcast we look ahead to the midweek Premier League games.

Plus, Sky Sports News reporter Rob Dorsett has the latest on the impact coronavirus is having at Aston Villa, following the postponement of their game with Tottenham, tells the story of Louie Barry, and discusses Wolves vs Everton.