Brad Smith has achieved something even compatriot and Socceroos great Tim Cahill could not – win the MLS Cup.

The Seattle Sounders sealed their second title in four seasons with a 3-1 home victory over Toronto FC in front of 69,274 fans at CenturyLink Field – the second highest attendance ever for an MLS game. 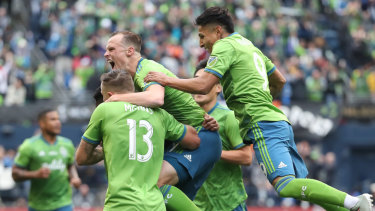 The on-loan Smith, who started the match at left-back before being replaced on 61 minutes, is the only Australian to win American football's top club prize.

Smith, in fact, became the first Australian to play in the decider – with Cahill, Danny Allsopp, David Carney, Andy Rose and Bernie Ibini all failing to achieve such success during their MLS stints.

The 25-year-old Smith has been recalled to the Socceroos set-up by coach Graham Arnold and will join the squad this week for World Cup qualifier against Jordan in Amman this Friday (AEDT).

It's been quite a journey for Smith after he left Premier League giants Liverpool in 2016 in search of more first-team football. 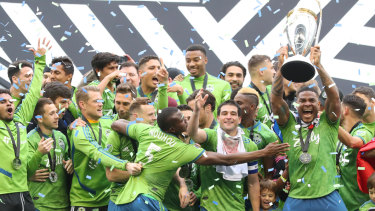 It was Seattle’s second triumph in the past four seasons.Credit:Getty

He was loaned out to Swindon in 2014, had a frustrating time at Bournemouth, who remain his parent club, before his career got back on track when he linked up with Seattle in August last year.

Smith played in 29 games this MLS campaign, 26 as a starter, and has previously said he is open to making his Seattle stay a permanent one.

The Sounders repeated their 2016 final success over Toronto after a goalless first half.

Kelvin Leerdam's angled shot deflected in off Toronto's Justin Morrow on 57 minutes, substitute Victor Rodriguez connected in the 76th and Raul Ruidiaz added a third in the 90th.