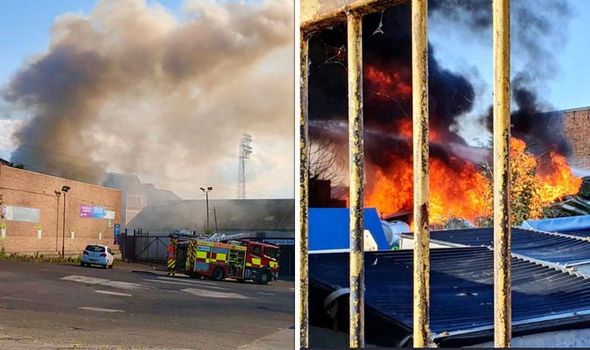 Southend United’s Roots Hall has been set alight and fire crews have rushed to the stadium to try and extinguish the blaze. Dark clouds could be spotted from miles away bellowing out of the 69 years old ground.

Southend were relegated from League Two after finishing 23rd in the table this season.

That means they dropped out of the Football League for the first time in the club’s history.

And their woes have gone from bad to worse as four fire engines were dispatched to Victoria Avenue at 5.45pm.

Police have asked the local area to keep windows and doors closed as they battle to get the flames under control.

Meanwhile, Southend attempted to save their Football League status by axing manager Mark Molesley in April.

They brought former boss Phil Brown back to the club but he was unable to keep ther Shrimpers afloat.

“We need to move things on quickly and relegation is never a nice feeling,” Brown said after the final game of the season, a 3-1 loss to Barrow.

“I took the six games to back myself and probably in hindsight it was maybe two games short, but that’s life. I accepted the six games because I wanted to prove to the Chairman that I can motivate a group of players and win games of football and I was delighted to get my 100th win as Southend United manager. That was a very proud moment for me.

“With that in mind, I hope it doesn’t finish there.

“I’ve signed a two-year deal which is geared towards promotion and then it becomes a third year automatically, which I shook hands on and I’m going to back myself to do.

“Hopefully I can get to 200 wins in that short space of time, and if that’s the case then certainly promotion is on the cards, if not back-to-back promotions. Let’s take one step at a time.”