Matildas coach Tony Gustavsson has delivered a dressing down to his players, saying they weren’t hungry enough to create a happy memory for Sam Kerr in her 100th international match.

In their first game since losing the bronze medal play-off against the United States at the Tokyo Olympics, Australia was stunned 3-2 by Ireland on Wednesday morning (AEST). 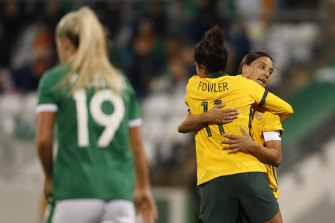 Mary Fowler’s double was one of only two positives coach Tony Gustavsson could find from Australia’s defeat to Ireland.Credit:Getty

Young gun Mary Fowler scored both of Australia’s goals in the first half, with her performance one of only two individual positives Gustavsson could glean from the contest – admitting there were none at all from a team perspective.

Gustavsson was wary of speaking too openly initially in his post-match press conference, admitting he felt “too emotional” to deliver a more sober analysis of the performance, but ultimately conceded that the Matildas failed to match the Irish for overall intent and said that was unacceptable.

“I said in the circle with the team afterwards that it felt like they wanted it more than us. That’s not OK. We’re the Matildas,” he said.

“It’s in our DNA to always give it 100, to play a physical game, to be aggressive, to wear the crest on the chest and always play our best.

“It felt like Ireland wanted it more. That hurts, to be honest. I need to look at myself in the mirror as well to ask, could I have done something different to prep the team in terms of that?

“Then I looked at the stats … that kind of paints the picture pretty good. The amount of technical mistakes, it must be some kind of record at least since I came on board.”

The Matildas were without eight of the players who formed part of the team’s best-ever Olympic campaign, and six of the players in the squad selected by Gustavsson were uncapped. 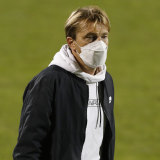 But they still should have had enough to deal with the world No.33-ranked Irish, who took the lead through an early Lucy Quinn free-kick – which was officially chalked up as an own goal – before ex-Western Sydney Wanderers star Denise O’Sullivan and Louise Quinn added the other goals.

While there was nothing riding on the result as a friendly, both the scoreboard outcome and the performance itself shows how much work the Matildas have ahead of them to become a true force in the women’s game in time for the 2023 Women’s World Cup in Australia and New Zealand.

“There’s no excuses, we had nine days to prepare,” Gustavsson said.

“We had an off day. I do think we were off from the whistle. I even said it a couple of minutes into the game – we’re late to everything.

“We felt really motivated going into the game because there’s been a lot of focus on Sam Kerr’s 100th game and we said we want to leave our captain with a memory for her life … and it didn’t look like that tonight. We didn’t look energised and passionate, the way I’m used to seeing this team, and that’s not OK. We all agreed on that in the circle, players as well – it’s not OK.”

Gustavsson did, however, reserve special praise for Fowler, who was playing against the country of her father’s birth, and for whom she was eligible to play for until being only recently locked in for Australia. The 18-year-old now has four international goals from 16 caps and has already proven she is one of the Matildas’ best attacking threats, having been hailed by former coaches Alen Stajcic and Ante Milicic as one of the most complete players to have emerged from Australia in recent years.

“Mary Fowler’s first half was just world-class. Oh my,” Gustavsson said. “She is so good out there, on and off the ball, the way she sets players up, her movement – she’s floating out there, and she’s one v three at times, just sliding out of those pressure moments. And then her finishing, we know she’s brilliant with her right and left foot.”

The Matildas won’t play again until next month, when Football Australia is hoping to bring them home for a pair of friendlies against Brazil on October 23 and 26 in Sydney.