The dysfunctional nature of Chelsea was writ large on the Wembley turf. For 120 minutes in this tense, unenlightening League Cup final, the players in royal blue had stood up to everything Manchester City could hurl at them. But then, with barely seconds to go of extended time, an unlikely but wholly unilluminating dumb show unfolded that told you everything about this increasingly uncontrollable club. 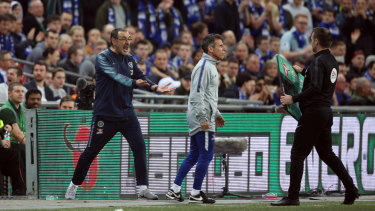 Never before had Wembley seen anything like it. With penalties looming and his goalkeeper Kepa Arrizabalaga writhing in agony in his area, the Chelsea manager Maurizio Sarri had ordered his substitute custodian, Willy Cabballero, to strip off. But, despite the coach's increasingly anguished attempts to get his player to respond to his authority, Kepa simply refused to be substituted, insisting he was fit enough to continue. He did not want to come off.

Later, he would claim it was all a misunderstanding. That was not how Sarri took it. Incandescent, tearing at his tracksuit in frustration, the Italian was reduced to storming away from the action. That he did not even manage to leave the field, turning back halfway to the tunnel, was indicative. This is a man no longer capable of even fulfilling a dramatic gesture. 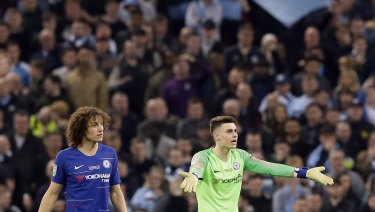 You could see the difference between a united club like City and one falling apart at the seams during the shoot out that followed Kepa rebellion. As the penalties were taken, City's backroom staff were in a long line of unity, arms around each other's shoulders, manager Pep Guardiola in the centre, alert, excited, engaged. Chelsea's staff, meanwhile, had no such co-ordination, togetherness or harmony. Some of the coaches, physios and sports scientists were standing, some squatting, some barely able to bring themselves to watch. As for their leader, he had abandoned all sense of collective responsibility and stood behind his colleagues, hands in pockets, privately fuming, alone and adrift.

Here was evidence of a coach aware that his time had run its course. Unable to shape things, without control or influence, this was a manager who had demonstrated in an explosion of petulance near the end of extra time, the deep and painful fissures in his club over which he has increasingly failed to exercise any impact – a manager crumbling in the face of player power. 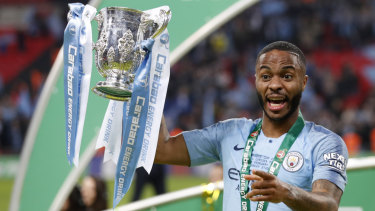 Victors: amid all the drama it was easy to forget Raheem Sterling\’s penalty kick won City the first of what may be four trophies this season.Credit:AP

Yet, the truth is that for nearly 120 minutes he had held the upper hand tactically. After the abject humiliation against City at the Etihad only a fortnight ago, he had come up with a plan that, if nothing else, eliminated any fear of further embarrassment. With Eden Hazard in the centre of a fleet-footed front three, he sowed a seed of doubt in his opponents' minds, worrying them that at any moment they might be taken apart by the speed of the counter attack. Towards the end of normal time, he was even able to bolster his attacking resources, sending on Callum Hudson-Odoi, Gonzalo Higuain and Ruben Loftus-Cheek in the effort to secure a victory that might have, however temporarily, prolonged his tenure.

Instead, if it is recalled at all, this will be a cup final remembered for the potent sight of a manager no longer able to manage his players. Never before can Wembley have witnessed such public insurrection. Kepa refused to listen to Sarri's orders, orders he was entitled to issue for tactical reasons – Caballero has a history of excellence in shootouts – even if the player was not as injured as assumed.

"At no time has it been my intention to disobey the coach or any of his decisions," Arrizabalaga later said, stressing: "I have full respect for the coach and his authority."

Faced with mutiny, Sarri responded with all the dignity and resolve of a five-year-old refused a second portion of chicken dippers.

From there, what unfolded came as little surprise.

As Guardiola stood among his players delivering an inspiring team talk, Sarri had no such similar words. Chelsea's shoot-out began in ominous style, with the manager's pet, Jorginho, padding his shot haplessly into the arms of Ederson. Kepa did make one save, from Leroy Sane, but was never the hero that his stubbornness had demanded. As for Sarri, nothing positive awaits.

"Kepa was right but in the wrong way," he said. "He was right for the motivation but not for the conduct."

On the pitch before kick-off a huge banner was rolled out which featured a picture of him in a Chelsea tracksuit.

You suspect it may soon be a collector's item.

However, if the Italian would like a keepsake of his time in Chelsea's employ, it is unlikely Kepa will be putting in a rival bid.