Tomas Soucek is a physical and statistical giant. Speaking exclusively to Sky Sports, the West Ham midfielder reveals insights on his stellar campaign, his league-topping fitness and aerial power, the race for Europe and potentially facing Declan Rice this summer…

West Ham enter the final week of the season with two games to play and four potential outcomes: qualification for the Champions League, Europa League, Europa Conference League or they miss out on Europe. The club’s change in fortunes is stark – the Hammers were battling against relegation last season.

With a vastly superior goal difference over eighth-placed Everton, Soucek’s team need to win only one of those games to almost certainly guarantee a spot in Europe next term.

The fact West Ham have sat in seventh or higher since mid-January is another indication of how far the club has come and Soucek is key to that transformation – having joined the club on loan from Slavia Prague last season before signing a permanent deal in the summer.

“It’s hard [to evaluate the season] because there are still two games to go,” says Soucek.

“But I’m really pleased with how it’s gone [so far]. This season has been brilliant for us. Many people expected us to be low down the table, but we wanted to give everything to be in European football next season.” 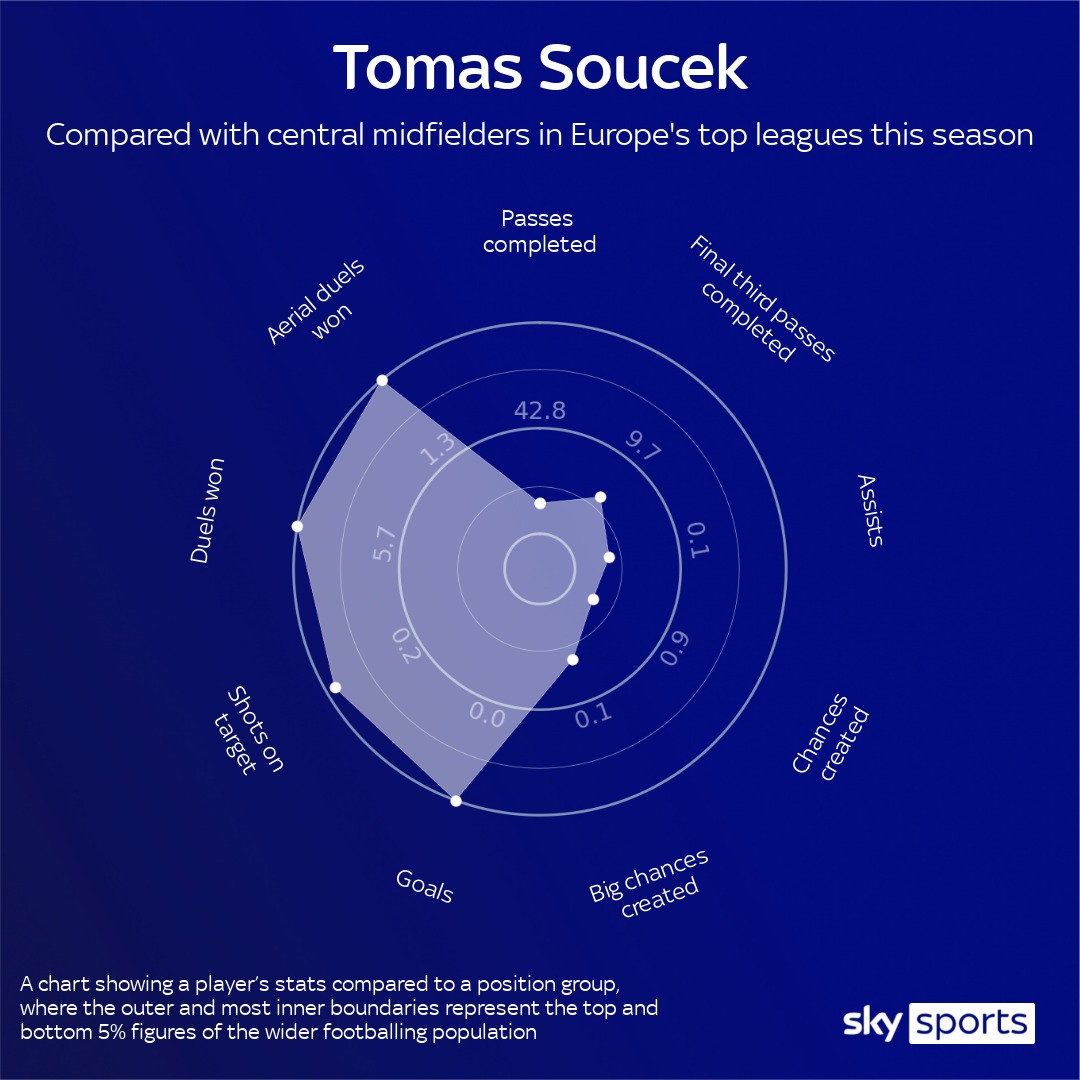 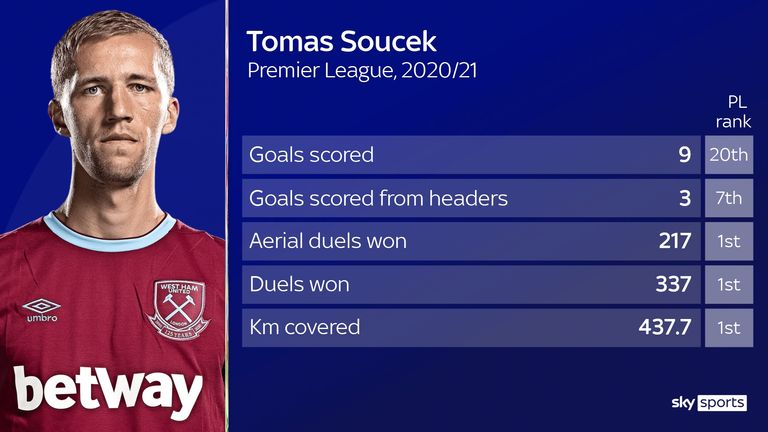 Two dreams in one

The 26-year-old is relishing a potential return to the European stage, having represented former club Slavia Prague in both traditional competitions during his five years in the first team. “I wanted to play in the Premier League – that was my dream. To play in Europe with West Ham would be two dreams in one!

“It was great to play midweek games [in Europe with Slavia Prague]. I just hope we do it and play in the Europa League because we are very close. Should West Ham achieve that goal, Soucek could well face his old side or former Czech rivals next season. “The big rival in Czech Republic is Sparta Prague, because I came from Slavia,” he adds. “But, for me, it would be great to play against Slavia in Europe – to go back to the stadium with West Ham.”

“We changed our mentality during lockdown: to be prepared for every game in a winning way. Our spirit increased. We really showed it in the last 10 games of last season. We won the fight against relegation and transferred it immediately to this season. So I think it was this hard work and spirit that was the biggest change.

“We had Zoom calls, fitness practice and we knew we had to prepare ourselves because we couldn’t meet together, so it was hard but [afterwards] we came into training for the first days and noticed it looked very good and we were fit. “I just want to anticipate when the ball could come and go there. Many times in the boxes, the ball can go behind the defender and I go there, maybe, 20 times when the ball doesn’t come but I could score the goal on the 21st time. It’s the same in the middle of the pitch when I want to block. 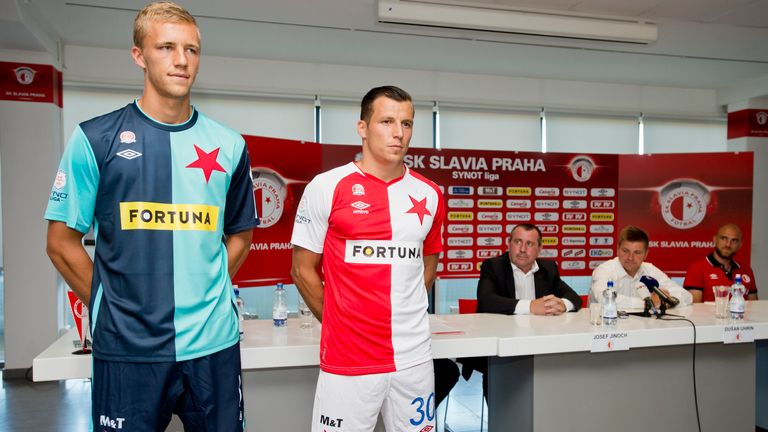 Box to box, defensive, target man… what is he?

Most players can be pigeonholed into a prescribed position – where they are most effective and potent.

However, Soucek covers all bases: he scores, protects the defence, runs relentlessly, intercepts, breaks down opposition and provides unparalleled aerial power, while only Aaron Cresswell has attempted more passes at West Ham this season. Is he box to box, defensive, a target man or a workhorse? 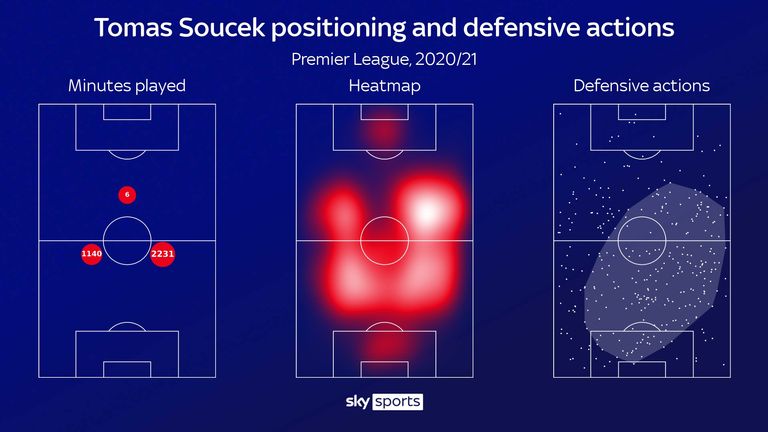 “I am all of those. I want to do what the team needs. It’s often box to box, but many times I cover defensive midfield, behind the No 10s or wingers, for example. I just want to do the maximum to help my team.

“But I am probably more of a defensive midfielder because I like to play there and block opposition chances. But I can also go to the offensive box from the second line and not many guys [can handle] me there. I can be free [in that area] and that is my biggest advantage.

“I benefit from our set-piece deliveries. It’s great for me. I just have to find the ball in a good area and be prepared. 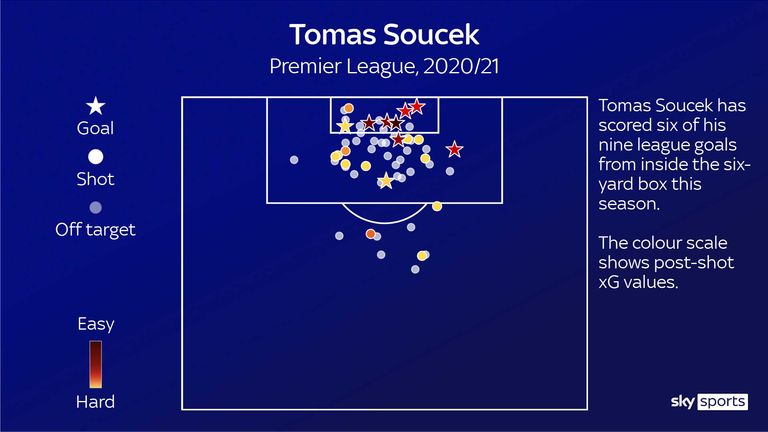 His versatility and offensive aerial threat has led to comparisons with Marouane Fellaini, who excelled under David Moyes at Everton in a similar role before following the Scot to Manchester United in 2013 and now plies his trade in the Chinese Super League. 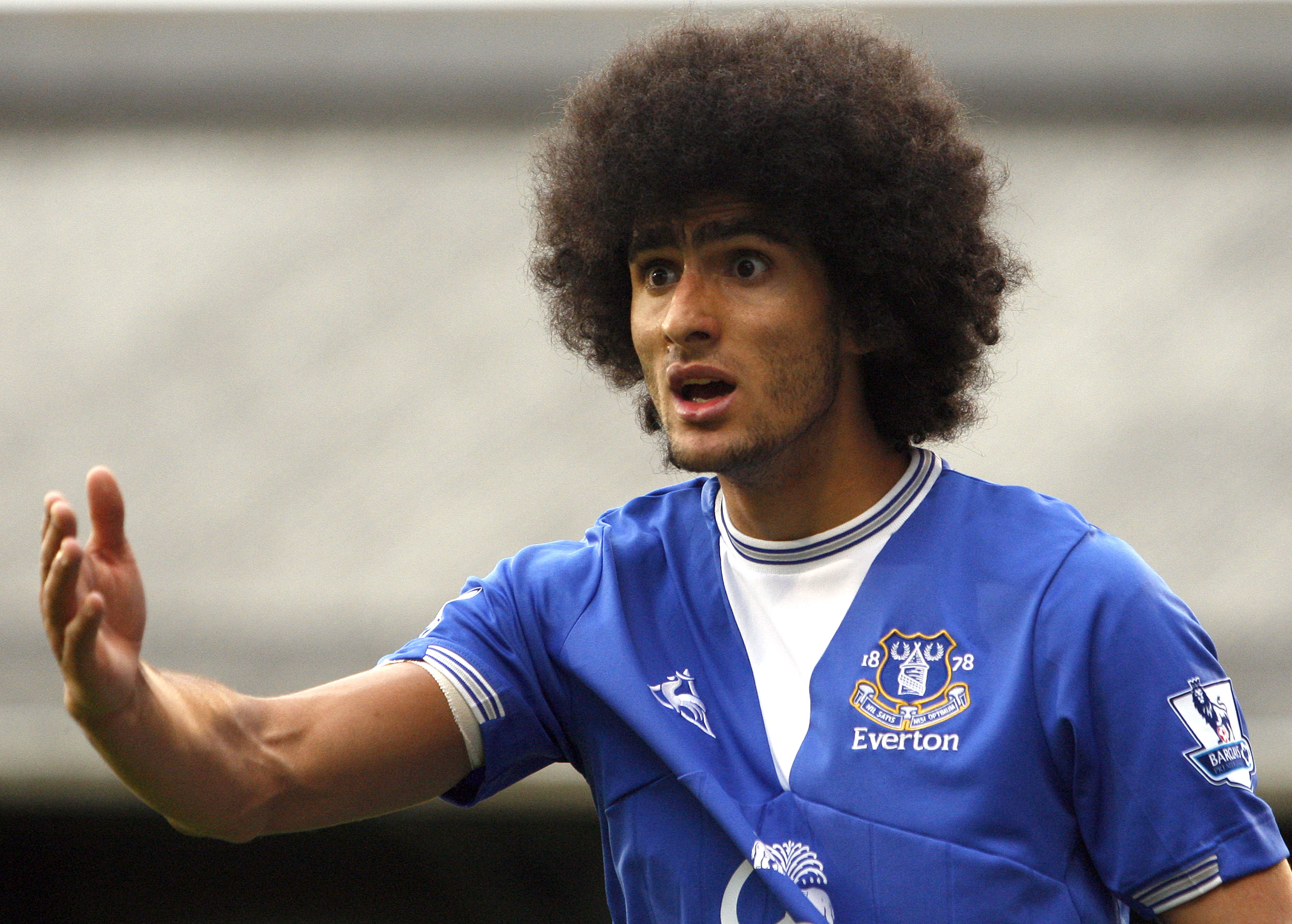 “Fellaini is a very good footballer – a great career. It’s good for me if someone compares me with him,” says Soucek. But whom did he admire most as a child and emerging professional footballer? “I loved Cesc Fabregas growing up but he is not like me as a player.

“In my position, I really liked Yaya Toure – he played brilliantly. I love to watch football, not just play. I’m also a football supporter and still watch and learn things that could be helpful for me.” 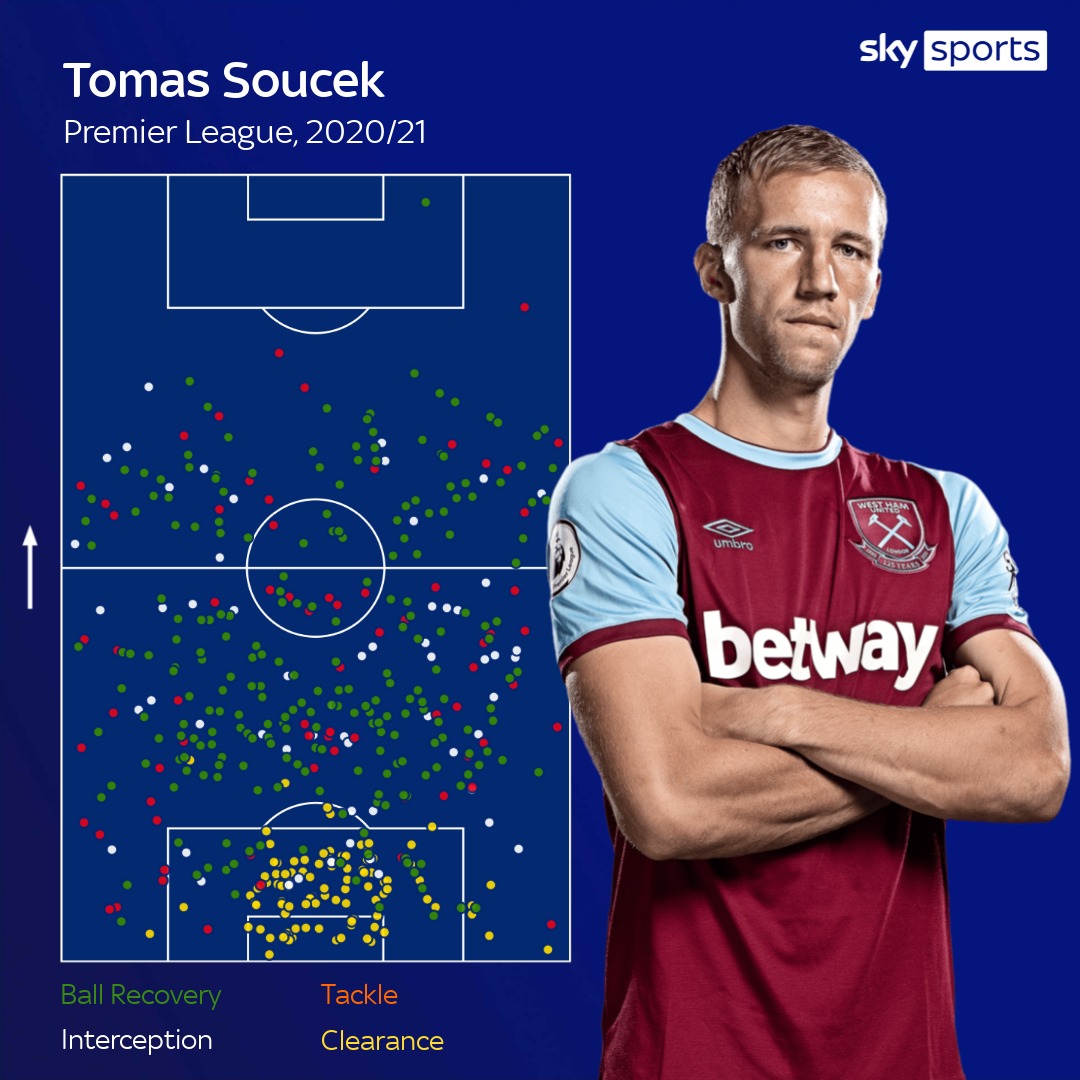 Signing of the season?

Speaking on Monday Night Football, Jamie Carragher voted for Soucek as his signing of the season. 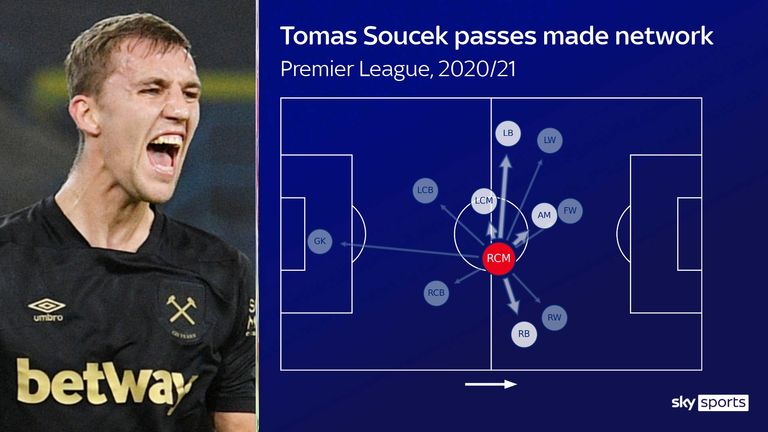 “This is a team that was fighting relegation now going for the Champions League and I think he, for me, is possibly the most important player around that and what he is like in both boxes, which is a huge part of West Ham’s success.”

The recognition prompts a humble smile from Soucek. “I really appreciate this from Jamie. It’s great for me and makes me work [harder] at the training ground and during games.

The career highlights keep rolling. Soucek is set to face England at Wembley in the European Championships on June 22, which could see the Hammers’ holding midfielders go head to head. But, first and foremost, Soucek has revelled in the burgeoning relationship with Declan Rice, on and off the pitch.

“This season is much better, we are more connected together. We know what the other will do on the pitch. For example, I know he will cover behind me if I go into the box and I want to do the same for him. We have a balance and it’s great to play with him. “A game against Declan would be special. We have talked about it! We are good friends but for 90 minutes it would be a big fight for us both! It would be strange but I’m looking forward to play against England and Declan. I just hope I can kid him after we beat them!

But West Ham’s race for Europe is the only challenge on the immediate horizon for Soucek and his side travel to West Brom live on Sky Sports this Wednesday before a season finale against Southampton at the London Stadium – which will also see the reintroduction of fans to fittingly close the curtain on a sensational campaign.