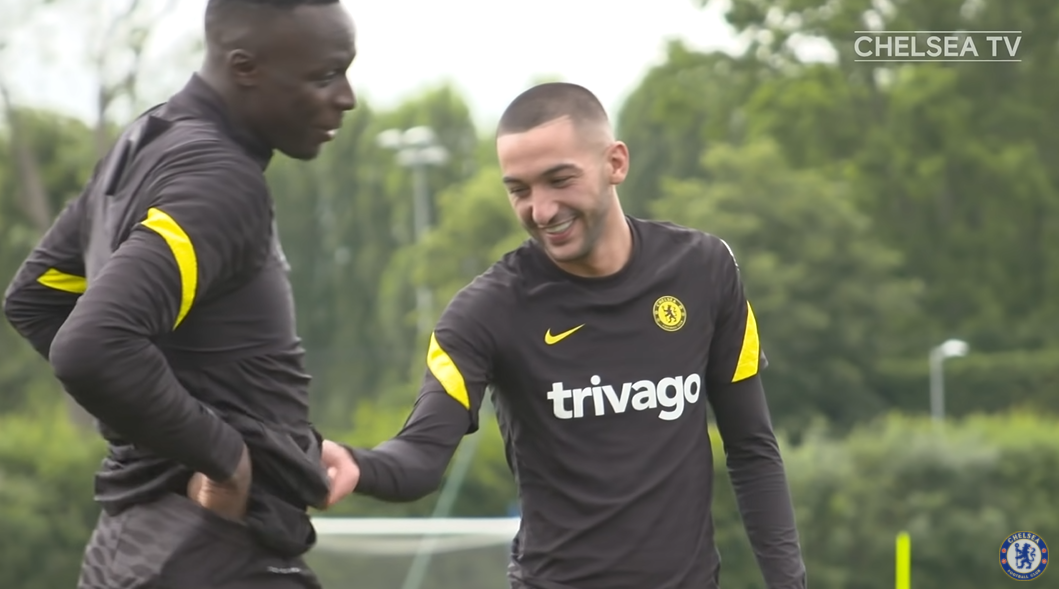 Chelsea playmaker Hakim Ziyech teased teammate Edouard Mendy on their first day back in pre-season training, suggesting the goalkeeper had enjoyed himself a little too much over the summer.

The first wave of Chelsea’s players returned to the club’s Cobham training complex this week as preparations for the new Premier League season got underway.

Most of the squad took part in either Euro 2020 or the Copa America, meaning only a handful of senior players who were not involved in international tournaments reported back for duty this week.

Mendy last played on June 8 for Senegal in a friendly against Cape Verde, while Ziyech similarly has had a month off since playing for Morocco against Burkina Faso on June 12.

Spirits were high among Chelsea’s Champions League-winning squad as the players gradually started to return, with Mendy taking part in goalkeeper training alongside Kepa Arrizabalaga before joining in with the rest of the players.

He may have a few gruelling sessions ahead of him, though, with Ziyech suggesting the towering shot-stopper wasn’t exactly in tip-top shape after a month off.

The former Ajax midfielder playfully poked Mendy in the stomach as they were warming up, making a funny noise as he did so, and then remarking ‘Too much kebab’ to another player.

Mendy took the cheeky barb in good spirits and Chelsea’s whole squad – and staff – seemed delighted to be back on the training pitches, with manager Thomas Tuchel even getting in on the fun.

Incredibly, on the first day of training only three players were present in the morning session: Callum Hudson-Odoi, Tammy Abraham and Tino Anjorin.

Tuchel walked out onto the pitch for the first session and remarked: ‘Three players and 18 coaches! That’s what we call individual training!’

Turning his attention to Hudson-Odoi, he grabbed the winger and continued cheekily: ‘No hiding! This is very good for Callum Hudson-Odoi, no more hiding! Hiding is over!’

The England international, who only featured sparingly under Tuchel in the second half of last season and lost his place in Gareth Southgate’s Euro 2020 squad, played along with his manager’s gag before continuing with training.