Former Everton and Crystal Palace striker Cenk Tosun was kung-fu kicked by a fan amid ugly scenes following the full-time whistle in Besiktas’ 3-2 win over Ankaraguru on Sunday night. Dele Alli also netted his first goal for the Black Eagles in a Turkish Super Lig clash marred by unsavoury scenes.

Alli notched his first goal for his new club on just his second appearance, ghosting in at the back post to slide in former Burnley flop Wout Weghorst’s knock-down. The strike saw the Everton loanee find the net for the first time in 378 days and edge Besiktas 2-1 in front 10 minutes before the interval after team-mate Jackson Muleka had only five minutes before cancelling out Giorgi Beridze’s opener for the hosts.

The Ankaragucu winger would go on to level the contest minutes into the second period, before former Tottenham attacker Georges-Kévin Nkoudou netted the winner for the Istanbul-based giants from the penalty spot 15 minutes from time. Ankaragucu defender Marlon was dismissed late on and the tense finale then boiled over following the full-time whistle.

As a number of players shook hands and consulted the referee in the centre circle moments after the contest’s end, a shirt-less fan invaded the pitch before landing a kung-fu kick on Besiktas striker Tosun. The assailant was promptly thrown to the turf by Tosun’s team-mate Josef de Souza before being apprehended by stewards. 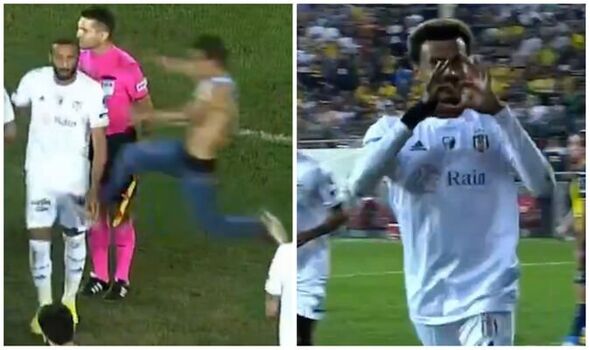 Speaking after the episode, Weghorst insisted the attacker should be “punished in the most severe way” in order to allow Turkey football to continue to make progress. The giant Dutchman said: “It is impossible to say that these things are normal. So many wrong things happened.

“I know that Turkish people act with their emotions, I love that. Still, this is unacceptable. A very unfortunate event took place, someone hit Cenk. 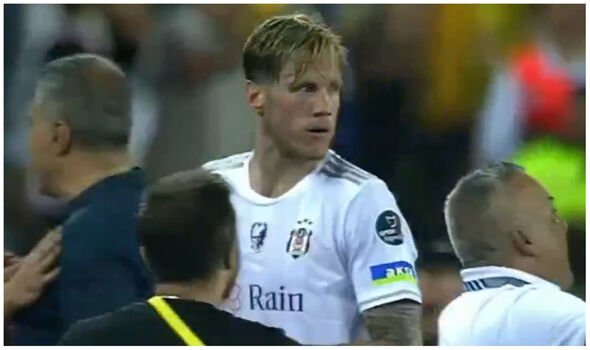 “Turkey is a beautiful country. In order for the Super League to develop further, this should be punished in the most severe way so that it does not happen again. I think something unacceptable has happened.”

The three points against Ankaragucu saw Besiktas continue to set the pace in the Turkish Super Lig after five games played, putting them two points clear of Konyaspor atop the league’s standings. Valerien Ismael’s side host Istanbul Basaksehir in a local derby next weekend in what could be yet another heated encounter.